The suction power of a finger-sized Northern clingfish is enough to hold up to 150 times its own body weight.

Researchers at the University of Washington also discovered that the clingfish actually holds on better to rough surfaces than to smooth ones, putting to shame industrial suction devices that give way with the slightest uneven surface. 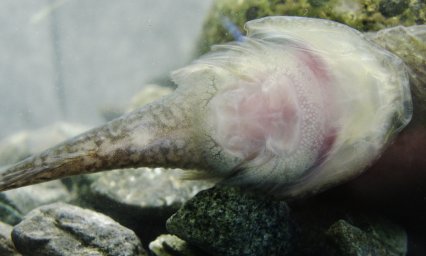 Clingfish have a disc on their bellies that is key to how they can hold on with such tenacity. The rim of the disc is covered with layers of micro-sized, hairlike structures. This layered effect allows the fish to stick to surfaces with different amounts of roughness.

"Moreover, the whole disc is elastic and that enables it to adapt to a certain degree on the coarser sites," says Petra Ditsche, a postdoctoral researcher with Adam Summers’ team at Friday Harbor Labs.

Many marine animals can stick strongly to underwater surfaces — sea stars, mussels, and anemones, to name a few — but few can release as fast as the clingfish, particularly after generating so much sticking power.

Clingfish’s unique ability to hold with great force on wet, often slimy surfaces makes them particularly intriguing to study for biomedical applications. Imagine a bio-inspired device that could stick to organs or tissues without harming the patient.

"The ability to retract delicate tissues without clamping them is desirable in the field of laparoscopic surgery," Summers says. "A clingfish-based suction cup could lead to a new way to manipulate organs in the gut cavity without risking puncture."

Researchers are also interested in developing a tagging tool for whales that would allow a tag to non-invasively stick to the animal’s body instead of puncturing the skin with a dart, which is often used for longer-term tagging.