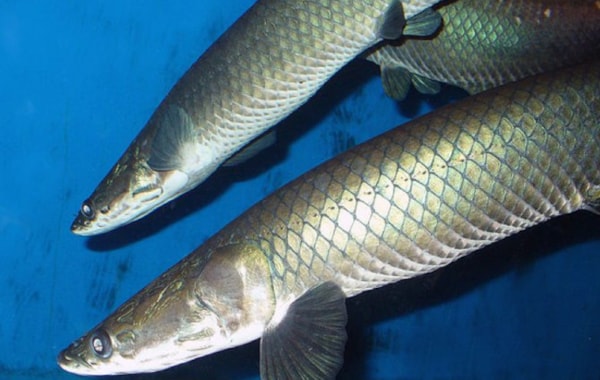 A new species of Arapaima has been discovered - the first since 1847.

The new species, Arapaima leptosoma, was described by Dr Donald Stewart of the SUNY College of Environmental Science and Forestry, from a single specimen collected in 2001, near the confluence of the Solimões and Purus rivers in Amazonas State, Brazil.

It's a more slender fish than other Arapaima — hence the name leptosoma, which means 'slender body'.

Until recently, it had been thought there was just a single species of Arapaima: A. gigas. But work by Stewart has shown there could be at least five species of these giant air-breathing Amazonian fish. In a paper earlier this year he re-named Arapaima agassizzi, whose existence was first established in a rare 1829 monograph. This species was originally named A. agassizii in 1847 by a French biologist, but a publication in 1868 considered it to be the same species as A. gigas. That second opinion was widely accepted and, until Stewart came along, no scientist had ever questioned that view.

He expects the diversity of the genus to increase further with additional studies.

Strangely, some of the photos on Wikipedia's listing for Arapaima actually show the new fish, Arapaima leptosoma — including the picture above — according to a report in National Geographic. These photos show Arapaima kept in a public aquarium in the Ukraine, and Stewart says he has no idea how the new species managed to get there.