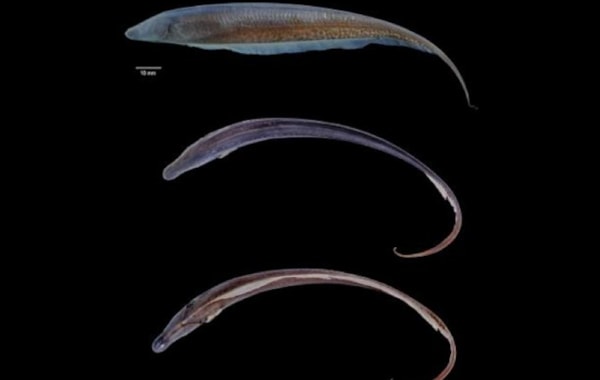 Ichthyologist Hernan Lopez-Fernandez of the Royal Ontario Museum has collected an entirely new genus of fish in what may be South America’s newly discovered hotbed of ecological and evolutionary adaptation.

In the first committed ichthyologic explorations of the Mazaruni River region, Hernan encountered numerous species previously unknown to science. Among them was a small and innocuous looking Hypopomid-type knife fish that turned out, on further examination to be somewhat unique.

Using DNA sequencing, Nathan Lovejoy of the University of Toronto Scarborough, discovered that the fish was a distinct lineage all of its own, and not just at a species level.

The fish has been named Akawaio penak, with ‘Akawaio’ being honoured to the local Amerindians of the same name, that inhabit the area. ‘Penak’ is another tip of the hat toward the local peoples, being their common parlance for the fish in question.

New genus discoveries are rare compared to new species finds. However, the Mazaruni River looks to be an exciting spot for further scientific explorations.

Tucked away from the rest of South America through huge elevations, the fish here have been evolving away in isolation for about the last 30 million years, and are now tossing up many new species that Hernan’s team is gradually and laboriously uncovering.

Hernan initially explored the region in anticipation of finding the diminutive cichlid Mazarunia mazarunii, a species only tentatively known through a handful of specimens and described by Kullander back in 1991. Since then, very few fish have been collected from the area, and those were destined for museum collections.

In Hernan’s words, "These ancient highlands have been isolated from the rest of South America for so long that almost everything that lives up here is unknown anywhere else on the continent."

During the research trip, an assortment of other fishes — some named, some not — turned up through the explorers’ nets, including Skitiocharax, Derhamia pencilfish, Paulasquama, Moenkhausia and Neblinichthys catfish. Almost twenty other previously unrecognised species were hauled from what was a surprisingly scant collection.

Notably absent from the finds were any large species. Hernan was quick to observe a lack of any of the South American favourites such as Piranha, big catfish, or stingrays.

True to its Gymnotid ancestry, the new fish retains an electricity producing capability, and although it has no aggressive electrical means to stun prey, it uses its electrodetection to navigate and find prey, as well as communicate with other faintly electric fish.

Akawaio penak was found in the main channels and tributaries of the Mazaruni River. One population was caught at night only, found on artificially formed beaches created from sand and pebbles, a natural scar of the prolific gold mining in the area. This population inhabited water up to 1m in depth, and were presumed to have been feeding at the time.

Another population was found during daylight, hidden away on the banks of a shallow blackwater pool. Both regions were scattered with vegetation and some sunken wood. The water from each location was largely acidic, stained black or red-black (as opposed to murky, as some reports have claimed), with pH ranges between 4.4 to 4.8pH, and a slightly lower tropical temperature of between 22-23.5°C. Water was unsurprisingly soft, with a conductivity of under 10us.

Further investigation is required to understand the full extent of Akawaio’s natural range, and currently it is only confirmed from the main channel of the upper Mazaruni River, the mouth of the Kamarang River, and Waruma Creek.

However, even as the fish is discovered, we already find that it could be imperilled. The area where it is found is slowly choking and degrading as a consequence of regional gold mining operations. Even thirty million years of evolutionary fine-tuning will struggle to cope with the rapid, onset environmental decline brought about by big industry, it would seem.

Mining barges that can process up to 130 tones of sediment, treating it with mercury before returning it to the river are bringing havoc to the area, alongside the many mining camps and projects that line the river’s banks.

Results of the fish discovery can be found in the recent edition of the Zoologica Scripta journal, titled: 'Akawaio penak, a new genus and species of Neotropical electric fish (Gynotiformes, Hypopomidae) endemic to the upper Mazaruni River in the Guiana Shield.'