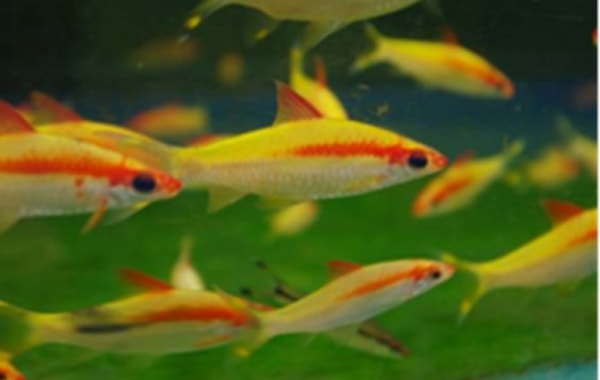 Practical Fishkeeping has learnt of an interesting tropical fish to hit the shops.

A line bred, bright golden Puntius denisonii colour variant is due to be shown to the world imminently, and we at PFK predict the fish will be massively popular.

The gold morph is the brainchild of CV Maju Aquarium in Indonesia, and came about when yellow mutant fish were noted and harvested from their existing P. denisonii commercial breeding ventures.

Since last year, these one-offs have been collected to make a breeding project, and are soon expected to be available commercially. Brood stock numbers aren’t huge yet, and so the project is being tightly managed, and turnout figures presently low.

Such fish would not be naturally occurring in the wild, due to the predation pressures that come with having a garish colour, but we expect to see further variants from this fish as commercial farming interests continue to grow.

Maidenhead Aquatics show launch
Maidenhead aquatics have managed to secure a few specimens of this attractive looking variant, and are preparing to showcase them at this weekend’s Aquatics Live event at London Olympia.

The pictures seen here were provided by Maidenhead, and were taken from a recent buying trip by the company to the breeder.

These fish are not expected to be available for a few more months yet, and we suspect that the initial prices will be high, although there is no indication of cost at this time.

If interested in these fish, it would be worth considering getting hold of some sooner rather than later, as traditionally we have seen fish like this becoming duller and less colourful as breeders try to optimize production at the expense of a little quality.

When released, Maidenhead Aquatics are expecting a period of UK exclusivity on the species, due to longstanding relationships with the supplier.

Not hybrids
Close inspection of the fish reveals that they are indeed P. denisonii, and not the closely related P. chalakkudiensis, which can be told apart by the presence of an inferior mouth, as well as black markings in the dorsal fin, and a shorter red stripe. The stripe in these golden fish runs well into the middle of the body below the dorsal fin, where chalakkudiensis stops shorter of this.

We also feel safe that this is not a hybrid of species, and speaking to the breeder we are content that this is not the case. Previously, unions have occurred between P. denisonii and either Dawkinsia filamentosa or Puntius everetti, with not wholly pleasant results.

Puntius denisonii is sold under many common names including Rose line shark, Red line torpedo barb, Bleeding eye barb or even Miss Kerala. The new gold variant may itself generate many new common names as times go on.

What they need
Keeping these fish should be no different from keeping their wild counterparts from Kerala, India. Keepers should aim to recreate a faster flowing stream with plenty of open spaces and some foliage cover at the edges.

Though wild Denison barbs can be solitary, the aquarium kept specimen is very gregarious, enjoying the company of its own, and a shoal of five or more should be aimed for as a minimum.

These are not small fish, and we have no reason to suspect the gold variants will grow any less than the standard 15cm, and so a tank of 120cm or more is highly recommended for a small shoal. They are fast, torpedo shaped fish that can dash themselves against the glass in too small a set up.

Like all Denison’s, we expect these to be skittish, and are likely to jump or dash at the first instance of fright.

Like the wild fish, it is probable that these will fare best at a pH of around 6.5 to 7.8, and a hardness level of up to 25°dH. We are unable to find exactly the conditions that the fish are currently kept in.

Denison’s temperature tolerance is usually very good, with fish often found at readings as low as 15°C. We expect that these farmed versions are being kept much higher, if for fecundity reasons, and a Maidenhead representative should be able to advise the optimal temperature range for this variant.

Expect oxygen requirement to be high with these fish. P. denisonii inhabits regions with high turbulence, and in absence of oxygen the fish will quickly begin to suffer.

A similar intolerance is found with water quality. With little ability to cope with ammonia or nitrite, P. denisonii will always need to be kept in water of impeccable quality.

Retaining the colours may be a challenge, and so we’d advise a diet high in carotenoids. Many dry brands carry this as a matter of course, but also think of frozen foods like Calanus, which are high in this ingredient. Frozen meals offered frequently will keep them in good check.

Where to buy them
As of early November 2012, the fish aren’t yet available for sale, but if after more information, or to discuss reserving a fish in advance, contact your local Maidenhead Aquatics branch who will be able to advise further.

Pictures are scarce at this time but if you want to see them live and swimming, visit the Maidenhead Aquatics stand 607 at Aquatics Live.

For young fishkeepers the chain is also featuring a kids colouring-in competition and a kids quiz, as well as two free to enter competitions to win a Seashell Phoenix aquarium worth £564 plus a trip to the Aquafleur nursery in Holland for two, to hand pick plants for your new aquarium.

The other competition is to win an AquaReef 195 complete systemised marine aquarium worth £849.99.

Practical Fishkeeping predict a veritable gold rush from both commercial and hobbyist breeders who will be keen to breed and sell on what is sure to be a sought after species variant.