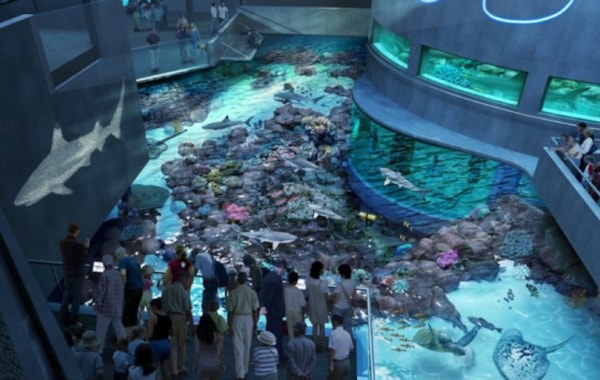 A new exhibit based on the Indo-Pacific has opened at the National Aquarium in Baltimore.

Twelve of the 20 Blacktip reef sharks destined for the new exhibit were added on Monday, joining hundreds of fish, along with the aquarium's 500-pound Green sea turtle, Calypso.

Over the next few weeks, many other species — including Zebra sharks, Wobbegong sharks, a Blotched fantail ray, a Reticulate whipray and a Napoleon wrasse — will be introduced.

The idea behind the new exhibit is to replicate a section of the Great Barrier Reef as closely as possible. Blacktip Reef doesn't feature live coral, but thousands of replica pieces, painstakingly modelled and painted.

Visitors can look down on the reef from above and also watch the inhabitants at different heights through 10cm/4"-thick acrylic windows.

Blacktip Reef has been open to the public for several weeks, but gets its official grand opening next month.