This strange-looking beast is the Bearded worm goby, Taenioides cirratus. Ben Lee tells us a bit about it.

Taenioides cirratus, also known as the Bearded worm goby, belongs to the Gobiidae family and has the typical goby characteristic of a pair of fused pelvic fins with disc-shaped suction. However this is where the similarity ends with this bizarre-looking fish. 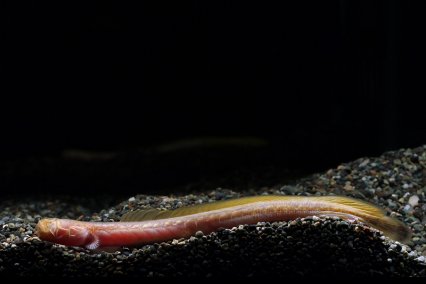 At first glance, Taenioides cirratus looks like a contradiction. This fish is bathed in a pinkish-golden tinge along its body but it appears to be without scales. Yet attached to this beautiful and lithe body is a fully wrinkled skull-like head. The yellowish-translucence of the face makes it look like a skinless skull. Complete with a row of spiky teeth on the outside of its mouth, a pair of tiny dotted eyes, and a stubby short beard, its extra-terrestrial look is worth a mention here. 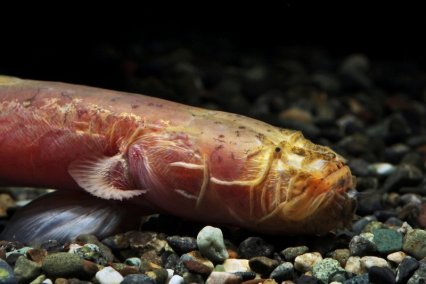 This goby species inhabits coastal waters, estuaries and rivers of many parts of Indo-Pacific such as India, Bangladesh, Thailand, Indonesia and Papua New Guinea. It lives in burrows in the muddy substrate of the coast and it is capable of digging networks of tunnels in the mud. As it spends most of its life in darkness under the mud, it is no surprise that the eyes are reduced to tiny dots and they rely more on their sense of smell than sight while foraging for food. In the wild, this fish feeds on crustaceans and small fish.

As it is capable of taking in gulps of air directly from the surface, it is able to survive out of the water for a considerable period of time.