Is this an ancient sea monster? The Dusky grouper (Epinephelus marginatus) used to be so large that the Romans depicted it as a sea monster capable of swallowing humans.

The Dusky grouper is a large, long-lived predatory species that grows slowly. It can be found mainly in the Mediterranean, the west coast of Africa and along the coast of Brazil. Because intense fishing pressure (especially in the Mediterranean Sea) has decimated this species, it has been listed as Endangered by the IUCN.

In a study published in the most recent issue of the journal Frontiers in Ecology and the Environment, based on survey results in the Mediterranean Sea, authors Paolo Guidetti and Fiorenza Micheli found that the Dusky grouper is presently more common in deeper waters than in shallow (by a factor of six), and that large individuals are very rare in shallow waters.

They also noted that the average size of the Dusky grouper was a lot larger when humans began fishing for them about 100,000 years ago: based on the bones from ancient human settlements, the dusky groupers that had been caught were greater than 70cm/28" on average, with many specimens measuring at about 90cm/36".

The authors examined hundreds of Etruscan, Greek, and Roman paintings and mosaics representing fishing scenes and fish, focusing on 23 Roman mosaics dating from the first to fifth centuries AD that clearly depict the Dusky grouper. Of these, ten of them rendered the fish as being very large (approximately similar in size to the archaeozoological data given above), in one case large enough to engulf a man.

The fish were also depicted as being caught in shallow water by fishermen on boats using poles and harpoons, a technique that the authors say would surely be unsuccessful for groupers today.

Although the interpretations of the mosaics should not be taken literally (for example, Dusky groupers are not known to attack humans), the authors contend that much useful information can still be gleaned. 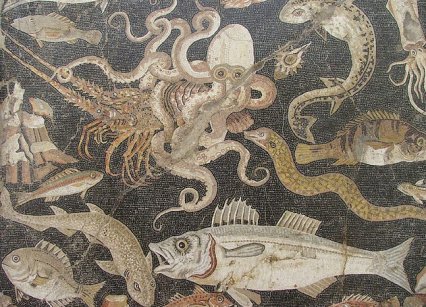 The depictions of the Dusky groupers in the Roman mosaics suggest that they were, in ancient times, so large as to be portrayed as 'sea monsters" and that their habitat use and depth distribution have shifted in historical times; this species apparently lived in shallow waters, where it is now rare if not completely absent.

This study highlights the importance of using historical evidence such as ancient art in understanding the baseline conditions of species, and can help set appropriate conservation goals.

Given enough time and protection, this problem can be partially redressed, as the authors quote evidence that Dusky groupers in long-standing no-take reserves move from deep to shallow waters. However, complete recovery is no longer possible. "One extreme suggestion would be to place a moratorium on grouper fishing, because they're not recovering outside of a few small marine reserves," said Micheli. But she added that this would be an unpopular measure, as the grouper is a favoured target of sport fishing in the Mediterranean.