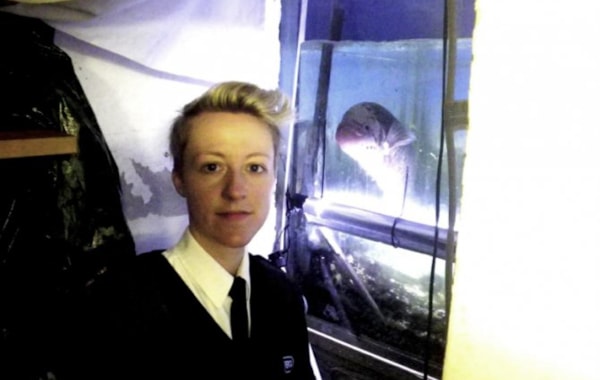 A Giant gourami can now spread his fins after being removed from a tiny underground tank in the middle of a restaurant floor, and moved to a more spacious new home at SEA LIFE London Aquarium.

The RSPCA was called after concerns about Bob the gourami, who was being kept in a restaurant in Lingfield, Surrey. The fish is thought to be around 12–14 years old and has grown to 60cm/2ft long — far too large for the small hole in the middle of the restaurant floor where he was being kept. This tank is about 3 x 4.5ft and 4–5ft deep.

Bob’s owners agreed that it was in his best interests to be moved elsewhere, and so with the help of the Aquarium staff he was transported to London last Tuesday.

RSPCA inspector Kerry Gabriel said: "Poor Bob could barely turn around in the tiny space he was squashed into in the restaurant — he had just grown too big for it.

"It may have been more roomy when the owners first got him as a young, smaller, fish — and seemed a quirky idea to have a fish swimming in the middle of a restaurant — but there was no doubt that Bob’s welfare was being compromised and his needs not being met so we were pleased that the owners were happy for him to be moved.

"We are very grateful to the SEA LIFE London Aquarium for agreeing to take him in.

"The journey to get him there was very slow and tricky. We had take great care with balancing the oxygen and pH levels in the tank to make sure he was acclimatised and would survive the change.

"But it's all worth it to see him swimming happily about in his big new tank."

Kerry added: "Unfortunately this is something we see far too often, with people taking on unusual pets because of their quirky appeal, without realising how big they may grow or how difficult their needs might be to provide for."

Tom Pockert, from the SEA LIFE London Aquarium, said: "We are delighted to welcome Bob to his new pad which we hope suits his needs a lot better.

"It's common cases like this that not only put stress on the health of the fish being rehomed, but also on the aquariums that accommodate them. We simply don't have enough space to rehome every animal that outgrows its tank, which is why it's so important that hobbyists do their research before they buy tankbusters such as Bob."