A new cryo-bank concept means endangered fish could be preserved and then restored to life in years to come. Nicolette Craig finds out more.

The University of Bedfordshire’s LIRANS Research Institute houses a project almost space age in its concept. It holds more than 140 species of fish, including 12 extinct in the wild — but there are few tanks.

Professor David Rawson, who set up the unit, is dedicated to ‘cryo-conservation’: the freezing of the complete genome of threatened species so we may be able to bring them back from extinction.

This has already been done for economically important stocks such as sea bass to maintain genetic diversity of captive-breds in fisheries and also for scientifically important fish such as zebrafish used as model systems.

Professor Bill Holt at the Institute of Zoology told PFK: “Other groups are focused on cryobanking for fish species and places. However, their activities are based on food fishes and aquaculture, while ours are focused on threatened species not generally of economic interest.”

“Other scientists working with particular groups of fishes may already have samples stored, but David Rawson is collecting viable cells that can be kept for posterity — or until future scientists want to study the genetics of species.”

With Brian Zimmerman at ZSL London the institute has been preserving fish tissue and gametes and so far complete cell lines have been obtained from ten species, including Blackfin tilapia, butterfly goodeid and polka-dot splitfin.

It’s hoped that these and other species will eventually be reared to adults and reintroduced.

Professor Rawson said: “The difficulty in cryo-preserving fish eggs and embryos is linked to several features not seen or less of an issue in mammals.

“They are large with low surface area to volume ratios; their membrane systems appear less permeable, making removal of water and addition of cryo-protectants (anti-freeze) difficult. They have a large yolk mass and are chilling sensitive. This is seen at temperatures reached earlier in cooling and before ice formation.

“One approach is to explore the cryo-preservation of very early oocytes while they are still small and relatively yolk free.”

In the meantime, scientists freeze tissue samples such as fin clippings and muscle tissue to preserve the cell lines.

LIRANS is a resource bank of UK freshwater and marine fish species, preserves genetic material, and cryobanks tissue material for genomic sequencing for Genome 10K —a project aiming to map the entire genome of 10,000 vertebrate species.

Professor Rawson is co-ordinating the collection of samples for the project at the University of Nottingham and project director Olivier Hannotte told PFK: “I think the problem with conservation is that people don’t want to admit defeat, so they resist the idea of a biobank, as they see it as just that.

“But why? We already have a seed bank and preserve the genetics of livestock.

“The Frozen Ark will not solve all our problems, but is more of a complementary measure and part of the solution. Ultimately other measures such as protecting habitats have to come first.”

“We are not working on bringing any species back just yet. I don’t feel the world is ready for this leap of technology and we don’t yet have a suitable protocol for artificial insemination.

“However, hopefully, in 50 years time we will be ready to bring back species or even clone species. ”

You can find out more and donate to the project by visiting the Frozen Ark website. 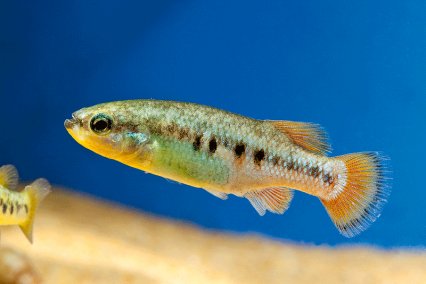 Olivier Hanotte is professor of population genetics and director of Frozen Ark project at the University of Nottingham.

What is the Frozen Ark?
It was a conservation project started in 2002 by a group led by Professor Bryan Clarke and Dr Ann Clarke.

Even with all necessary measures, we can’t save all the endangered species, but we can slow the tide.

Frozen Ark tries to offer a part solution, collecting material and cells of species endangered or likely to become extinct soon. This is particularly pertinent with fishes as they are extremely vulnerable to climate change and overfishing.

Each time we lose a species we lose information and potential. By storing cell lines we conserve this information and contribute to the conservation effort. Maybe we may be able to rejuvenate these species.

Is Frozen Ark restricted to the University of Nottingham?
A single storage facility would have to be enormous to fit everything in, so we set up a consortium of partners which are institutes such as universities, zoos and museums.

These include Twycross Zoo, the Natural History Museum, San Diego, Chester Zoo and the University of Bedfordshire. Each provides samples and a storage facility.

The project acts as a co-ordinator and database for what is stored.

Are there problems involved in the storage of fish material?
Selection pressure on wild populations may be very different to those in captivity. Fish in the wild produce many eggs, most of which are eaten/destroyed or disappear. Captive-bred fish have none of these pressures, so the genetic stock is much reduced.

While able to collect a lot of fish from captivity, they will be genetically identical. This makes them vulnerable if reintroduced to the wild. It is not enough to conserve material from a single specimen as we need to store a full complement for breeding.

How do you identify the species to conserve?
We use the IUCN red list as our basis. Experts on each taxa also recommend the species perhaps under-represented on the list, such as invertebrates and coral.