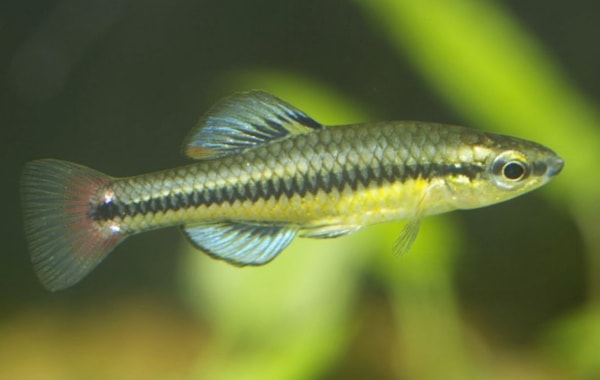 Male Bluefin killifish communicate with other members of the species using their fins, a new study has found.

University of Illinois animal biology professor Rebecca Fuller noticed this when snorkelling in a stream in Florida.

Fuller decided to try and find out what caused this variation in colour.

"Melanin is a signal to other males: 'I’ve been winning in the past and I'm doing well and get out of my way,'" Fuller says.

Carotenoids are known antioxidants; they gobble up highly reactive ions or molecules that can damage cells and tissues. Because killifish obtain carotenoids only by eating, researchers hypothesise that a display of colour derived from carotenoids signals to potential mates that the male in question is robust and well-fed.

In the new study, Fuller and Johnson discovered that richer carotenoid colouration on the caudal fin was associated with better body condition, lower parasite infection and good spawning success, suggesting that females respond positively to the brightly pigmented tail fins of potential mates.

Much less is known about pterins, Fuller says. They are associated with immune function and also have antioxidant characteristics, and so also may be a badge of health.

"We are finding that communication is complicated in nature and that animals have evolved ways to send different messages to different receivers," Fuller explains. "In the case of Bluefin killifish, multiple messages are being provided by three distinct pigments that are in three different areas of the body. Both females and males are getting these messages. Males are paying attention to the melanin, most likely, and females are paying attention to these more-colourful fins."

The results of the study are published in the journal Behavioral Ecology.