Fish get smaller when it gets really cold. In fact scientists based in Norway and Finland have discovered that harsh winters may actually cause them to 'shrink' by as much as 10%.

Research into the effects of cold on salmonid fish, led by Ari Huusko from the Finnish Game and Fisheries Research Institute in Paltamo, simulated the conditions faced in a typical winter on hatchery raised fish in specially constructed experimental pools.

Water temperature and flow were controlled and a cover was added to replicate ice on the water's surface.

The result was startling, as juvenile Brown trout,(Salmo trutta fario) shortened by as much as 1cm through a process described by the scientists as "over-winter anorexia", whereby the young fish conserve energy by a decrease in appetite over the transitional period as temperatures drop in autumn when food is in short supply. 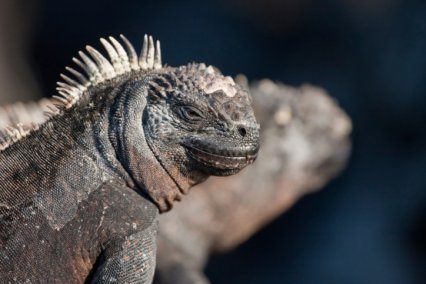 Similar shrinkages in size have been recorded in shrews and some lizard species, particularly the Marine iguana,(Amblyrhynchus cristatus) pictured above, of the Galapagos Islands which has been found to shorten in length by up to 20% during periods of low food supply caused by the El Nino event.

In these cases it was found that the drop in body length was caused by a reduction of volume of the nucleus pulposus, a jelly-like substance found within each vertebral disc which led to a flattening of the discs and subsequent shortening of the spinal column.

Although the cause of the shrinking in fish is still unknown, it seems likely to be caused by similar processes triggered by food and feeding stress in connection with environmental conditions generally poor for growth and survival.