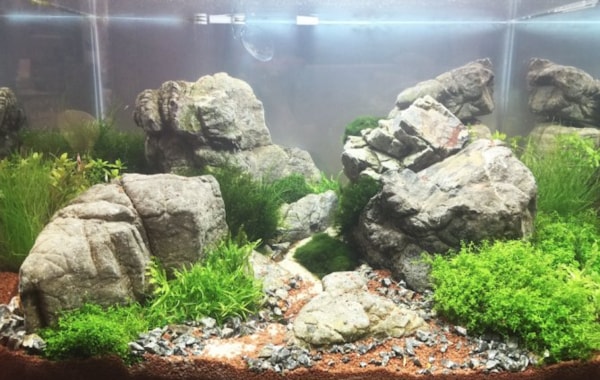 The finalists who were the top three ’scapers from round one — Antoni Dimitrov, Stephen Rhodes and Manuel Arias, ’scaped from 10am-5pm during the first day of AQUA. Spectators were able to vote for the best ’scape in the ballot boxes below the tanks from 1pm on the Wednesday and until 3pm on the Thursday. Antoni had already scooped first place in the first round and went on to produce the winning ‘scape in the final.
The competition was sponsored by Dennerle, Arcadia, Tetra, Eheim and J&K Aquatics. In the first round, Antoni won £500 cash, an Arcadia OTL LED (ce100f), Eheim Ecco Pro 3 2075 and Tetra goodies, trophy and certificate by coming first. Stephen Rhodes came second to win £350, Arcadia OTL LED (ce60f), Eheim Ecco Pro 300 and Tetra goodies and certificate and Manuel Arias came third to win £200, an Eheim Ecco Pro 200, Tetra goodies and a certificate.
The round one ’scapes were judged by Paul James (J&K Aquatics), Chris Lukhaup (Dennerle GmBH), Stefan Hummel (Dennerle GmBH), Serkan Cetinkol and Alastair Treymaine. 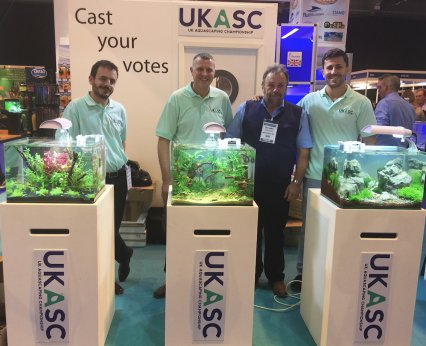 The three finalists are pictured above, from left: Manuel, Stephen, Paul James (J&K MD) and Champion Antoni.
All three finalists got to keep their creations including the 50 l/11 gal Dennerle ‘Scapers tank and Antoni won a £150 cash prize. The contest was a resounding success and the source of much interest at AQUA.
Want to enter next year’s contest?
The UK Aquascaping Championship will take place during autumn next year and entries will open on February 1, 2016. For further details on how to enter visit the UK Aquascaping Championship website.
Why not take out a subscription to Practical Fishkeeping magazine? See our latest subscription offer.
Don't forget PFK is also available in digital format.
Click here for more information on the iPad or iPhone version.
Alternatively, click here for details of the Android version.