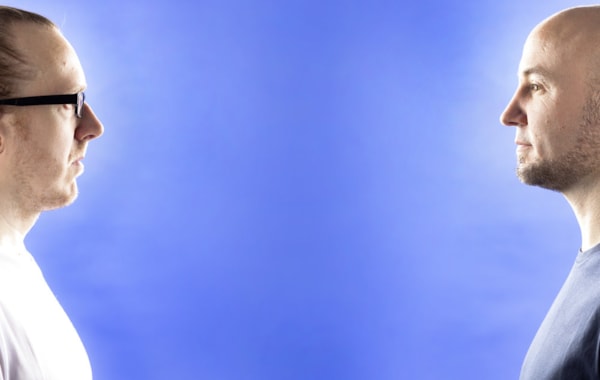 PFK associate editor Nathan Hill and staff writer Steve Baker go head to head in a short discussion about the ethics of hybrids.

NH: Let’s go straight in for the jugular and see how the conversation evolves from there. So, starting with the strongest sentiment, what’s the single worst thing about Parrot cichlids?

SB: It’s what the fish represents and what an acceptance of messing around with cross-breeding leads to. Accepting a man-made hybrid paves the way to not caring about bloodlines, survival of the fittest or the animal’s long-term health or ability to survive stress free. We already see low regard for the Parrot cichlid in areas such as tattooing and tail mutilation (albeit not in the UK) but this doesn’t seem to extend to natural fish.

NH: Is cross breeding always bad? Humans have hybridised many animals, and not always to bad effect. Mules, for example, have longer lifespans than the horses that sire them and are smarter than their donkey mothers. As for not caring about bloodlines, I wonder if this represents a broader trend of changing ethical opinions – I would argue that the Parrot cichlid is a symptom rather than a cause here. If that’s the case, I’d be wary of holding the fish to account for a cultural shift.

Tattooing and mutilation are illegal in the UK, and for the best part frowned upon by the majority. I’d add that folks who own Parrots often love them more like ‘higher’ pets such as dogs, while many ‘natural’ fish like tetras are the ones seen as disposable commodities.

SB: I agree; small, shoaling fish are often seen as a number and not an individual. There are many natural fish with higher pet-like qualities such as Oscars, puffers, eels and more, which recognise an owner and demand interaction. What’s the need to make another?

Tattooing and tail removal may well be banned here, but I worry about how long it will be banned for – the more manipulation of animals that becomes accepted, the more ethical boundaries will be pushed.

Is cross breeding always a bad thing? No. If two species meet, mate and produce viable offspring which survive, then I think it’s fine, natural. But I think bringing two (or more) species together that would never meet, don’t produce fertile offspring and carry deformities that would rule them out for survival in the wild is a poor choice. And what for? Because humans want to. Some hybrids will get the best of both parents, like the mule, but mules are infertile, which is genetics telling us they’re still an unsuitable mix.

Do we even know what they are? The flippancy toward genetics worries me when Parrot cichlid owners don’t even know their fishes’ lineage.

NH: I’m not sure that viability is an issue. Many pampered animals we keep are sterile (dogs, for example) so the ability to breed isn’t prerequisite. The deformity thing is indeed an problem, but Parrot cichlids don’t seem greatly inconvenienced with their deformities. And I don’t know how many Parrot cichlid fry are culled, but I’d wager it’d be around the same percentage as other mass-farmed fish.

SB: I don’t buy in to this idea that because we’ve messed about with some animals, then it’s fine to mess about with others to the same point too.

Plus, I see a big distinction here, as domestic dogs are all one species, and line-bred rather than hybrids. I still don’t like it, just as I don’t like line breeding in fish. Dogs have many ailments and develop ageing problems prematurely and, again, just because humans want them –  greed over welfare.

Deformity wise, I don’t see the Parrots in tanks at a disadvantage. In an aquarium they can look comfortable, but I’d be surprised if the culling wasn’t much higher than a natural ‘pureblood’ fish. We know the head is deformed in Parrots and some are likely going to be too deformed
and culled. The fact they can’t close their mouths completely means some have breathing issues and therefore more would be culled or succumb to problems during transport.

I agree that some other, natural species are less suited to aquaria. We have them because we want them, not necessarily because we can house them well. But there are many natural fish that are more suited to aquarium life than both Clown loach or Parrots.

NH: People vote with their wallets. If they truly disliked Parrots because of welfare issues, then there’d be no market. Breeders are only filling a void that the public supports.

I’m flying blind on mortality rates and long-term health issues. All we have is conjecture. We can say that the fish ‘should’ have problems courtesy of deformities, but the fish themselves seem (this is anecdotal, as I can only vouch from those I’ve seen) oblivious to their ‘defects’. They strike me as resistant to disease and water quality issues that would hammer other fish.

To stick my neck on a chopping block, Parrots almost seem a better choice for, say, a 120cm boisterous community than a generic wild-caught, high-stress South American cichlid that would rather be in a river. Given the options, surely there’s a case to be made that Parrots can be the ‘least worst’ option.

From my experiences, I think the issue with Parrots boils down to two points. Firstly, they’re seen as diluting interest in ‘real’ fish, which threatens the hardcore aquarist – there’s a dread at seeing the hobby become nothing more than a collection of chimeras.

The second point is part of a wider argument, and depends on which side of the GM/hybrid fence your prejudices put you. If you’re anti-GM and against tinkering with organisms, Parrots are a no. If you’re on the side where tinkering is just progress, then I doubt you’ll have a problem with them. I think that many people’s minds are made up on this issue before they even know what the issue is.

SB: Absolutely, there are different camps out there and I know mine is a hard-lined attitude where I give much more respect to nature than I do to the human position.

My view of GM is that if we were sustainable with our breeding rates as a species and responsible with our demands on the planet, we wouldn’t need to mess with genetics of anything, plus nature wouldn’t be so pressured by habitat loss and pollution.

I don’t hate Parrotfish, but I do hate the idea of people messing about with genetics and hybridising purely for profit and for the enjoyment of other people. For me it would be far more righteous to spend our time and energy exploring ways that we can lower our detrimental impacts.

This feature was first published in the Spring 2018 edition of Practical Fishkeeping.