Nicolette Craig balances the scientific studies and sharply divided opinions of both schools of thought. The conclusion however isâ€¦ inconclusive!

If a tree falls in the woods when no one is near enough to hear it, does that tree make a noise associated with that pain? Equally, if a fish is injured does it feel pain, even if it can’t tell us if it is suffering?

Earlier this year PFK summarised a study conducted in the USA which pointed to the fact that fish do in fact feel pain. It raised many comments from our readers, so clearly this is a subject we care about and discuss often.

The study exposed goldfish (Carassius auratus) to high temperatures to see if they reacted adversely and if morphine had any affect on their reaction. Scientists found that the fish displayed an escape reaction to the heat once it had reached a certain temperature. This suggested that around 38°C/100°F their sensation changed from that of heat to one of a more ‘noxious’ variety — and then the fish were most likely perceiving pain.

Morphine effect
However, the study found the morphine had little effect on the fish, which could possibly mean that the fish were not feeling any pain at all.

Janicke Nordgreen, the key scientist of this study, is keen to point out that she does not believe this is the case and told PFK: "We know very little about how morphine works in fish, but we do know that they need a lot more — up to 1,000 times the doses used in mammals — to have an effect.

"However, because we know so little it does not make sense to argue that a lack of effect of morphine means no reaction — and no pain. There is much exciting and important work waiting to be done on fish analgesia and we hope that our equipment, which is experimental, can be used for that. Finding painkillers that work in fish is central to ensuring their welfare."

Controversial as it may seem, one school of thought believes that fish do not perceive pain at all. This is based on an argument that centres on whether fish are actually perceiving pain or simply reacting to a noxious stimulus known in the scientific world as nociception.

James Rose, Professor Emeritus at the department of zoology and physiology at Wyoming University, is a key supporter of this argument and since the 1990s has been pointing out that fish lack some of the 'basic equipment' to actually feel pain.

He told PFK: "I believe that a large amount of evidence leads to the necessary conclusion that fish are not aware of the sensory stimuli that their nervous systems process.  So, they probably don’t experience sensations with awareness.

"Since conscious experience requires a large neocortical region of the brain, something that fish don’t have (and don’t have a substitute for) they probably have no awareness of sensory stimuli, in spite of the fact that they can respond well to these stimuli."

Dr Lynne Sneddon works extensively in this field, conducting key studies as to whether fish feel pain. She disagrees with Professor Rose and told us: "The argument that only humans and other primates with a highly developed neocortex are able to suffer from pain, and that fish cannot because their cortex is smaller and has fewer neurons, defies the laws of evolution.

"It also means that cats, dogs, birds, and other vertebrates are unable to experience pain.

"Rather than suggesting that animal pain has to be identical to human pain it seems reasonable to view animal pain as a more rudimentary experience — meaning that humans will have the most advanced, complicated experience of pain and fish have a more primitive form of the perception of pain.

"Fish have all the necessary receptors and neural anatomy to perceive harmful stimuli, and their behaviour includes many of those aspects you would expect to see in mammals experiencing pain.

"The key question is, can they actually suffer as a result of harmful stimuli? This may be a question to which there is no answer because we can never know what it is like to be a fish. Since it is impossible to definitively know if fish suffer from pain we have two options — give them, or not give them, the benefit of the doubt."

Professor Robert Elwood from Queens University, Belfast, agrees. He has studied pain in crustacea for several years, ever since a well-known fish chef met him in a local pub and posed the question of whether lobster suffered when cooked. 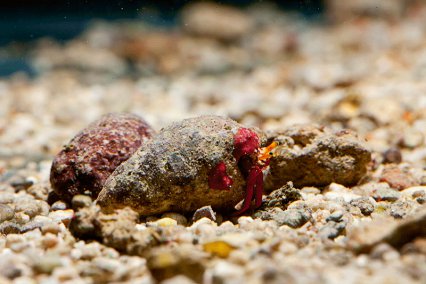 Crabs remember!
His studies on hermit crabs not only found it highly likely that they feel pain but also that they can remember this experience for a relatively long time.

"Although we can never say with 100% certainty that fish are experiencing pain it would be morally wrong not to protect these animals."

Bearing in mind that a study this year found that fish can remember for up to four or five months, and not three seconds, as previously thought, it seems only right that UK and EU law assumes that fish can feel pain and affords their welfare the same protection as other animals.

So do fish feel pain? Supporters of both sides of the argument can make some very persuasive cases.

It certainly seems that fish are not the simple creatures that many perceive them to be. They can remember, learn and most probably do feel pain.

Most fish typically have small brains relative to their body size, often only one-fifteenth the mass of a similar-sized bird or mammal.

As with the human brain the fish brain is divided into several regions.

This nervous system means that fish are able to hear, see and smell, often up to and beyond the abilities of humans, and sharks can detect even a single drop of blood in 100 l/22 gal of water.

Fish have pain, heat and pressure receptors, just like other vertebrates, and also have the lateral line system which enables them to detect changes in water currents and pressure.