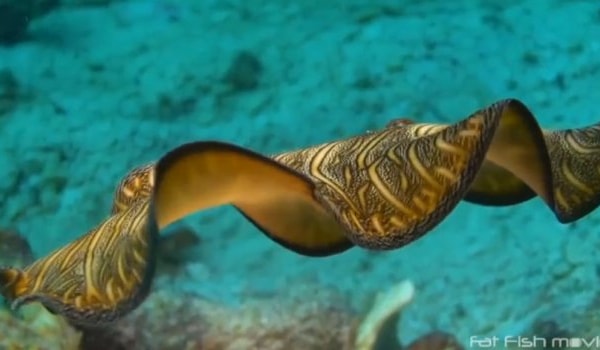 The beautiful Persian carpet flatworm pictured above and the more familiar Black ghost knifefish may look nothing alike - their last common ancestor was 550 million years ago - but a new study reports that both creatures have evolved to swim with elongated fins using the same mechanical motion that optimises their speed.

The two animals are part of a very diverse group of aquatic animals, both vertebrate and invertebrate, that independently arrived at the same solution of how to use their fins to maximise speed (scroll down for a video of the Persian carpet flatworm in motion).

Remarkably, this so-called 'convergent' evolution happened at least eight times across three different animal groups, supporting the belief that necessity played a larger role than chance in developing this trait.

The findings could help scientists better understand evolution as well as help pave the way for highly agile underwater vehicles.

Using computer simulations, a robotic fish and videos of real fish, the researchers from Northwestern University studied 22 animals called median/paired fin swimmers, in a wide variety of shapes and sizes. Their elongated fins both undulate, or ripple, lengthwise and oscillate from side to side. For all these animals’ fins, the team found that the length of one undulation during swimming divided by the mean amplitude of the sideways movement is always a ratio of around 20.

"Why do you see the same traits, such as the camera-lens eye or wings, in animals that are so different and have no common ancestor with that trait?" asked Malcolm MacIver, a senior author of the study. "It is because there is a finite number of ways to really do something well. In our study, we have quantified how an unusual group of swimming animals optimises force and, therefore, speed.

"Technically, it’s chance versus physics," said Neelesh A. Patankar, the study’s other senior author. "Chance offers many possibilities as to how a fish can swim, but physics and the animal’s environment puts constraints on these possibilities."

The researchers call the recurring ratio of undulation length to sideways movement that maximizes speed — 20 — the "optimal specific wavelength" (OSW). In their study, they did not find a single exception, and they expect that the additional 1,000 species that swim in this way (median/paired fin swimmers) but that have not yet been measured also will adhere to the OSW.

"Chance does play a role in these animals — they don’t all adhere exactly to the optimal number 20 — but there is a point where variability can become deadly, that swimming with the wrong mechanics means you waste energy and won’t survive," MacIver said. "The ratio of 20 is best."

The study was published in PLOS Biology.