I’m going to toss this one out there like a word grenade guaranteed to blow up in my hands and scatter us all with shrapnel, says Nathan Hill. Designer fish. Let me expand that. Morphs, crossbreeds, enhanced — man made fish.

Right now, you’re either in a big pile of ‘meh’ or you’re tearing my picture off the page and burning it. Let me put my own thoughts out there, because I can. We don’t need them. There, I said it.

‘Fake’ fish are a tawdry stand-in for real ones, as though the industry is pulling the teeth out of the entry-level hobbyist, and expecting them to be grateful for the chintzy dentures they’re replaced with. I’m not buying in to it. Naturally occurring fish are great as they are, stop messing them up.

Hold your horses, because that’s not the devastating, punch-in-the-face knock down argument you might expect it to be. I work for a publication that’s impartial about fancy goldfish. But it doesn’t follow that I’m indifferent to fancy goldfish. In the past I’ve rallied to their defence. I’ve kept them. I liked them. It doesn’t mean that I still do now. My views have changed and now I can’t really stand the things. Do we need them? Nope. Do the fish suffer because of their shapes? Sometimes. Would I rather be in a world without fancy goldfish? Probably.

Anyway, back to the matter at hand. When I visit many shops now, it’s foregone that there’ll be some monstrous beacon of unnatural colour slathering at me from somewhere behind a glass screen. Whether it’s a fresh strain of platy, a guppy with a technicolour tail longer than a millionaire bride’s wedding train, or some newly concocted African cichlid, I can be sure that somewhere in the tanks will be a fish so far removed from its ancestors that early taxonomists would have given it a new genus, let alone species name. 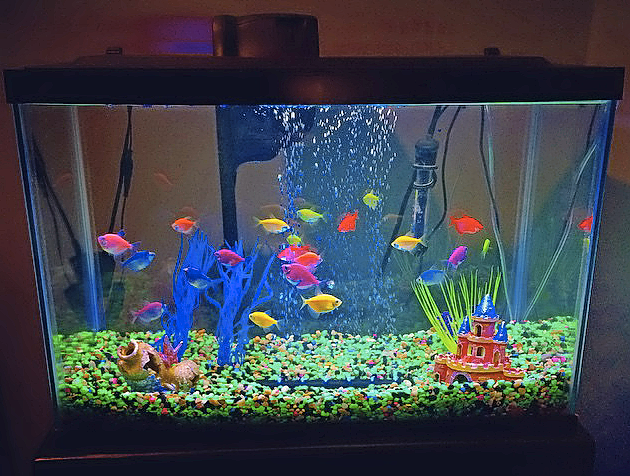 Will we eventually see Glofish here in the UK? Image by Matt, Creative Commons.

Here’s a thought. We don’t have Glofish in the UK. Yet. For the trade, that’s a mixed blessing. In the short term, the revenue they would generate would be like Easter and Christmas combined for shops, all day every day. On the flipside, making space for those bundles of fluorescent vomit would involve shoving out some of the slower selling stuff. So, that’ll be goodbye to all the interesting bits, then. Who needs a Corydoras guapore when you can have a glowing fandango albino instead, with electric blue eyes and a designer anus? While chasing the easy buck, the needs of the old guard could quite easily be neglected, ignored, or outright dropped.

The fact remains that we screwed up somewhat with the fancy goldfish, and we should learn from it. Instead of digging heels in and saying enough was enough, the world acquiesced until it was too damned late. Can we ‘undo’ the Celestial goldfish and fix it? Probably not, no, and as for whether they should be continued as a genetic line, I’m not getting involved. There are certain designer dogs facing similar kinds of welfare woes, with their snort-nosed asthmatic huffs and pelvic bones that shatter at a moment’s notice, and people still defend them as though sacrosanct.

We can, however, stop the same mistakes happening again. I doubt we will, but that’s representative of a wider societal woe. As we wax lyrical about our ‘rights’ to do whatever we please, we seem to forget that we also need to consider how our actions might affect everything else around us.

Bright, manufactured fish seem an inevitability of a consumerist society, where consumerism really just involves finding the next thing to satiate the ten-second whims of the buyer, until another shiny fancy comes along. It’s just a shame that our own hobby has also come to reflect this desire for gimmickry.

There was a time when we were still on the fringe that we were left alone in our curious desires to put fish into tanks. But now there are (big) pound signs attached, and where’s money to be made, it can be easiest to chase the least discerning market. We can all think of examples where something trashy outsells something of quality, I am sure.

So anyway, the point I’m trying to make. Love them, hate them, whatever; it’ll change nothing. Fish so artificial that you’ll puke at first sight are increasingly likely. Some are already here. The people that love them have already devised terrible arguments and absurd logical backflips to defend them, and they won’t be budged. Just get used to it, because they’re going nowhere fast.

Either way, if you’re a true fish fan, then my advice is to get involved with a club asap.

Although they might not be fighting some desperate rear guard action, chances are that they — and a tiny handful of stores across the land — will be the only ones to have the fish you’ll want when the Glofish (or worse — what new chimera is waiting in the wings?) eventually arrive and take over every bank of tanks this side of Singapore.