The decision on whether to close Exploris - Northern Ireland's only aquarium - has been deferred for two months.

The aquarium in Portaferry, County Down, is run by Ards Borough Council but now faces closure after a take-over deal with a private firm collapsed last week. Supporters of Exploris waited outside the council offices last night, where councillors were expected to vote on a recommendation to close the aquarium and sell it — but the decision has been postponed.

A statement from the council said: "Ards Borough Council has agreed unanimously to defer the closure of Exploris, the aquarium and seal sanctuary in Portaferry.

"It was agreed that the closure would be stayed for two months, to allow for firm proposals for alternative funding to come from central government departments - Culture, Arts and Leisure (DCAL), Environment (DoE) and Education (DE)."

Councillor Philip Smith, Deputy Mayor of Ards, said: "While there has never been any indication of a subvention for Exploris from central government, there does now appear to be a possibility that funding could be made available.

"Our decision allows time for that option to be explored. However, we do have to emphasise that the decision to close still stands if external funding is not forthcoming".

If the aquarium closes, Exploris has been unable to rule out the possibility that thousands of marine animals may have to be slaughtered, according to the Belfast Telegraph. A recent stock take at the aquarium revealed 3,307 animals are currently in the aquarium's care. 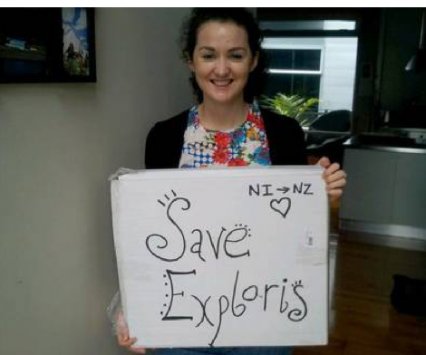 Meanwhile thousands of protesters have signed an online petition to keep the aquarium open and have also launched a Facebook and a global Twitter campaign, posting images of themselves holding signs that say 'Save Exploris'. Supporters from the US, Canada, New Zealand, Argentina, Israel and Taiwan are among those across the world who have joined the Twitter campaign at #explorisgoneglobal.