I'd been concerned for a while that the club scene was on its last legs, but I was wrong. The UK, indeed international, club scene is more alive than ever. It's just migrating, says Nathan Hill.

Out go chilly halls and wooden chairs, and in come the luxuries of being sat in your own home, tapping in to the digital interactions of forums and social media.

But of course, that’s all lacking on the hands-on front, surely? There’s something to be said for meeting other aquarists face to face, seeing fish first hand, or even just chewing the fat over a cake and a coffee. One wiley aquarist has managed to innovatively fuse the best of all worlds into one venue.

Craig Whitehead, an affable and perpetually smiling hobbyist himself, is the brains behind the 'Pleco Sales or Swap' group, a Facebook phenomenon that currently boasts in excess of 3,000 members.

The intention of the group was exactly as the name describes it. Craig was tired of not having access to the kinds of fishes he sought, and local retailers in his northern home county rarely if ever stocked those delights that he craved.

The group was set up to allow for a trading platform between equally minded enthusiasts, and it soon gained momentum. A closed group that anyone can request to join, it started life in October 2011, and has since evolved to be more than just a source of keyboard interaction, or clandestine meets that involve swapping fish. 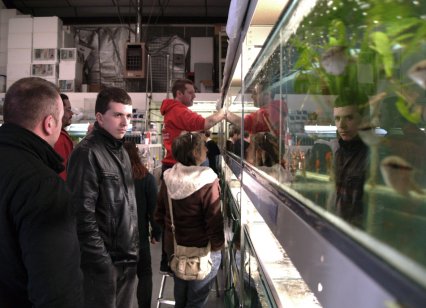 February 17 saw the third organised meet, based at Rare Aquatics in Crewe, Cheshire. Ultra-cynics may have images of a tiny handful of hardcore aquarists turning up to heckle discounts, but nothing could be further from the truth.

The event I attended was the third hosted so far, but the second that I managed to reach myself. Last time I got to witness a seminar given by none other than catfish hero Julian Dignall, who had travelled from Scotland for the day.

This time saw an equally massive turnout of catfish enthusiasts as former events. Not a dozen or so, but a steady, day-long stream of fishkeepers that packed in so tightly it was actually hard at times to navigate.

What did the day offer? Well, aside the chance to converse with likeminded aquarists, there were the private sales and swapping of fish. Enthusiasts were turning up with home grown L46 to trade for newer projects.

Rare Aquatics went out of its way to put on a glorious spread. It had primed for the meet in advance with the importation of 55 boxes of Colombian fish. Putting that into context, a large chain store may get through three or four boxes of tropical fish in sales per week. 55 boxes are a big commitment, and one that takes some effort to sort.

Rare Aquatics owner Jo Crane informed me in the brief break she could snatch between serving catfish-hungry customers that the shipment arrived at around 2pm one afternoon. They eventually got away from work just past midnight after unpacking and acclimating.

Aquarists on the day spent money as though the world was about to end. As I watched fish being piled into a box for one attendee who had travelled up from Brighton for the event, I ran a quick mental tally up that hinted at a one-off spend sat between £1000 and £1500. Even Craig had eyes on a brace of L397 cats at £100 a head.

I got to make many contacts on the day, and to put voices to names I knew. I got to covet fish and plan future projects. But more than that, I got to have a fun time with the most open and friendly crowd of aquarists there are.

Yes, the club scene is alive and well, but as I said, it’s just migrated. Welcome to the future of aquatic meets…