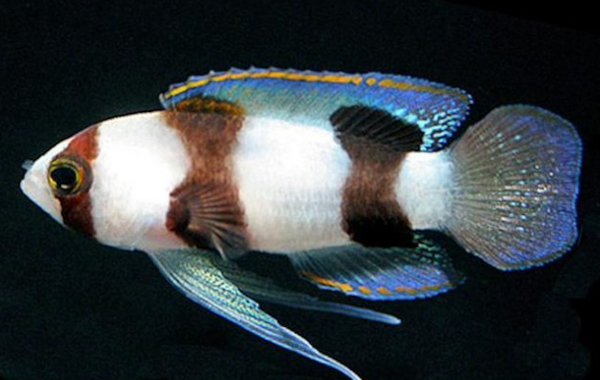 A new species of basslet has been described from the deep reefs of the Atlantic Ocean after previously being thought to be a juvenile form of the Banded basslet, Lipogramma evides.

A new species of basslet has been described from the deep reefs of the Atlantic Ocean after previously being thought to be a juvenile form of the Banded basslet, Lipogramma evides.

The new species, Lipogramma levinsoni, was discovered in the Caribbean off the southern coast of Curaçao and is characterised by predominantly white to tan coloured body with three vertical blackish bands, one running across its head, and two along the body. The latter often appear hourglass-shaped, with their middles being narrower and lighter. Due to this resemblance, the new species has been given the common name of Hourglass basslet. Its species name of ‘levisoni’ is in recognition of the generous and continuing support of research on neotropical biology at the Smithsonian Tropical Research Institute (Panamá) made by Frank Levinson.

A second new species was also discovered from Curaçao and can be distinguished by the three dusky bars likewise running across its head and body. Its ground colour is yellow to white, with the bar at the rear being much lighter than the rest. It has been named Lipogramma haberi and given the common name of Yellow-banded basslet. Its species name is in recognition of Spencer and Tomoko Haber, who funded and participated in one of the submersible dives that resulted in the collection of a paratype of the new species.