Takashi Amano, photographer, author, and founder of Aqua Design Amano, died of pneumonia on Tuesday, August 4 in Niigata Japan. He was 61 years of age.

Amano was universally recognised as the father of modern aquascaping, redefining the parameters and expectations of aquarium care and aesthetics. His loss has left a hobby and industry stunned.

Takashi Amano was born on July 18, 1954 in Maki town, Niigata, and it was during his childhood that he developed a keen interest in both plants and animals. Whilst still at school, he was noted for his studies involving Macropodus chinensis, the Chinese paradise fish.

In 1971, during his teenage years, he embarked on his first aquarium project, building and photographing planted tanks.

For many years Amano's aquarium aspirations had to coexist with his career as a professional cyclist, a sport that he began in 1974 and would later retire from in 1990. The cycling years were a strenuous but lucrative period for Amano, and through 1,078 races he earned in excess of £1,000,000 - much of which he poured back in to his joint loves of aquaria and photography.

It was in 1977 that Amano made one of his greatest breakthroughs, and one that would change the face of aquarium plant keeping irrevocably: carbon dioxide injection.

His epiphany came when he decided to take a more serious approach to plant growth, as he had been perplexed as to why older tanks would thrive, while newer set ups would struggle.

After experimenting with dry ice, he noticed carbonated water on sale while at a bar drinking with a friend. He returned home with five bottles which he added to a 2.4m/7.9’ planted aquarium, and was delighted to see the formation of bubbles on his leaves. With this cavalier, avante-garde approach, Amano had ushered in the new age of carbon dioxide injection to planted tanks.

The following 15 years of his life were spent refining his aquascaping techniques, concentrating on layouts and photography. Some of the later works from this period can be found in his earliest books. 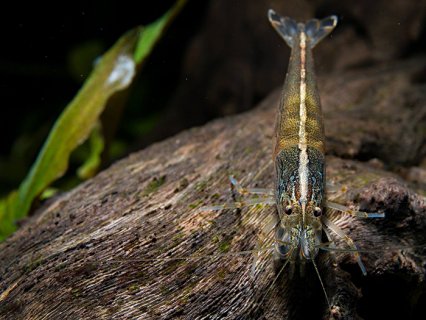 It was in the early 80s that he started algae-control experiments with various shrimp species. During numerous trials, one marked as 'yamato-numaebi' ranked much higher than its competitors, and Amano asked his supplier to collect several thousand for him.

The supplier initially baulked at the request, insisting that he'd struggled greatly to move his previous batches, but Amano was adamant. It wasn't until some years later in 2006 that the shrimp was formally identified. By then, it had already established itself as an aquascape staple, and graced planted tanks all across the globe. To this day, it remains a major seller within the industry.

In 1991, Takashi Amano entered and won the JPS photographic contest, and had an image later chosen for public exhibition. A year later, his photo 'Oniodori' - a submersed image of an Asian wrasse - won the Fuji film nature photo contest.

Amano specialised in large format photography, using equipment such as Deardoff and Wisner technical field cameras. So unique were his requirements for precise film that he would have his own specialist sheets made by Fuji - some of these sheets could be as large as 8 x 20 inches. Amano eschewed many modern photography techniques, preferring the colours and texture provided by film.

His works have been extensively shown across Japan, but also in Qatar and India, and in 2008 he displayed his nature images at the G8 summit in Tokyo, attended by the world's most important political and economic leaders.

His photography work took him to destinations all around the world, including the Amazon, Western Africa and Borneo, among others. 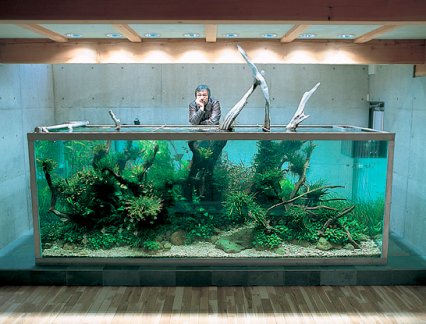 In 1992, Dr. Herbert R. Axelrod said that Amano 'is a portrait painter who uses an aquarium as his canvas and aquatic plants as his plants.'

Any modern aquascaper would agree. Amano completely revised the way that aquarists view their layouts. He introduced concepts such as Zen rock arrangement and Wabi-sabi to the aquarium format, using the rocks, wood and substrate as the lead characters in a diorama of some natural setting, while the fish, in his own words, were the 'supporting cast'. It was a contentious view that divided many in the industry between camps of fish lovers and layout lovers, with many aquarists seemingly unaware that they could be both simultaneously.

Concepts such as 'iwagumi' - a carpet-like, minimalist covering of low plants - and 'wabi-kusa' would likely still not exist were it not for Amano's influence. It was Amano who coined the phrase 'nature aquarium' to describe a layout that represents a wilderness scene.

Many aquarium plants we now consider to be aquarium staples would likely have never taken off without his guidance. Riccia, Glossostigma, Hemianthus and dozens of others could conceivably still be background curiosities without the popularisation that Amano brought to them.

It was in 1992 that he founded Aqua Design Amano (ADA), now the worlds most recognisable manufacturer and supplier of premium aquascaping tanks and accessories.

In the same year Amano published his first book - 'Glass no Naka no Daishizen' in Japan, a seminal work on aquascaping.

Numerous books followed, including 'Nature Aquarium World' in 1994. To this day, this publication is considered by many within the aquascaping fraternity to mark the birth date of the Western aquascaping phenomenon. Through it, Amano brought to a curious audience the concepts of carpeting plants and shrimps as cleaners, as well as carbon dioxide use. An entire generation of aquarists were immediately hooked.

In 1996 he published volumes two and three of 'Nature Aquarium World', cementing his position in public perception as the foremost aquascaping pioneer. Where found, these books still command exorbitant prices and continue to inspire aquarists.

In 2001, Takashi Amano founded the International Aquatic Plants Layout Contest (IAPLC), universally recognised as the largest and most prestigious aquascaping contest in the world, with cash prizes for winners and runners up. The competition revealed a global population of thousands of competitive aquascapers, and continues to do so to this day.

Takashi Amano kept working to the end of his life. This year, after an invite from the aquarium Oceanario de Lisboa (Lisbon) in Portugal back in 2013, he oversaw the design and installation of the world's largest nature aquarium, a 40m long, 160,000 litre 'U' shaped tank, which was completed in April. Containing 4 tonnes of sand, 25 tonnes of volcanic rock, 8 tonnes of aquasoil, 2 tonnes of wooden branches, and over 46 species of plant, plus 40 different fish species, it stands apart as by far the most impressive work of a long and devoted career.

The aquascaping world is united in mourning the passing of Amano, with commenters reverentially addressing him as 'master' or 'sensei'.

UK aquascaper George Farmer writes: "Takashi Amano is almost single-handedly the reason I dearly love my work and hobby so much. I vividly remember the first moment I saw his work in Nature Aquarium World Book One and it was like an epiphany for me. I knew that's what I wanted to achieve and it triggered my incredible journey into the world of aquascaping.

He changed my perception on aquariums, from glass boxes that keep fish, to works of art. I cannot thank him enough for the inspiration and joy he has helped bring into my life. I am so very sad that I never got to meet him and thank him in person.

The world has lost a brilliant artist but his work lives on through the countless aquascapers he has inspired. Rest in peace, Mr Amano. Thank you for everything."

Dates and details of Takashi Amano's funeral have yet to be released.