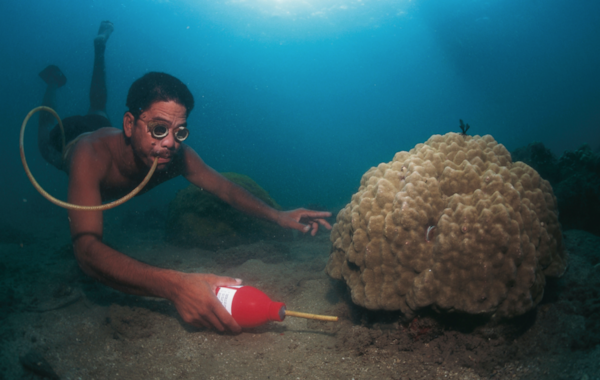 Scientists are a step closer to ending the deadly and destructive practice of illegal cyanide fishing, thanks to new research.

The use of cyanide to stun and capture fish for both the ornamental and food trades is still a problem in tropical seas, particularly in the Coral Triangle region, despite governments introducing laws against it.

It involves cyanide being dissolved in either bottles or drums and used to stun fish living within the coral reefs, making them easier to catch. But it has detrimental effects on the fish, coral reefs and the fishers involved.

Now two separate reports commissioned by the Ornamental Aquatic Trade Association (OATA) and the company behind the global chain of Sea Life aquariums have helped bring the likelihood of finding a validated test a step closer.

A robust detection test will help law enforcement pursue people through the courts by accurately showing the targeted use of cyanide rather than possible background levels already in the environment from other sources, like mining or agriculture. This will also then hopefully act as a deterrent to the practice.

Ben Spinks, of the Sea Life network’s Marine Animal Welfare and Development office in Weymouth, Dorset, said he and his colleagues were keen to find a way of ensuring no cyanide-caught fish ended up in Sea Life displays.

“This is an aspiration we share with OATA, which wishes to prevent cyanide-caught fish reaching high-street aquatic suppliers and their customers,” he added.

“This illegal practise tarnishes our industry’s reputation. Like Sea Life, we want to see it ended and to trade only in legal and sustainably caught fish,” said Dominic Whitmee, Chief Executive of OATA.

So, the two bodies have collaborated, with Sea Life owners’ Merlin commissioning a detailed analysis of the various detection methods and OATA funding a study on how cyanide is metabolised in fish to try to find the best indicator of exposure to test for.

Both reports were carried out by executive agency Cefas (Centre for Environment, Fisheries and Aquaculture Science), with the Fish Health Inspectorate acting as independent co-ordinators.

“It was important to have this independent assessment and the results give us a clear path towards the goal of safe, reliable tests robust enough to stand up in court that can help us to end illegal cyanide fishing permanently,” said Dominic Whitmee. “They tell us what is now necessary to establish ‘baseline’ background cyanide levels in each region, what is the best ‘indicator’ to test for and recommendations as to which test methods offer the most promise for laboratory or field tests.”

OATA and the Sea Life chain will be delivering both reports to industry colleagues and calling for their support, as well as that of key research centres, to get the necessary research done.

“These reports represent the best currently available science in the field which we hope will provide a catalyst for all those already engaged in the development of tests,” said Dominic Whitmee. “OATA continues to do what we can to help find a solution to this problem but we need everyone with an interest to come together and collaborate in a determined effort to find a solution.”

“The livelihoods of many thousands of families are at stake,” Ben Spinks added. “There are 370 million people living in the Coral Triangle – stretching from Malaysia and the Philippines to Indonesia and the Solomon Islands – and most rely on the ocean. “It is important for their futures, as well as for the reputations of the aquarium and hobbyist trades, that we move as quickly as we can to eradicate illegal cyanide fishing and help safeguard the health of the marine environment in the region.”