Anemones found living upside down in an ice shelf! Sea anemones have been discovered living in an ice shelf in Antarctica.

Thousands of the small anemones were found hanging upside down, burrowed into the underside of the Ross Ice Shelf by scientists and engineers with the Antarctic Geological Drilling (ANDRILL) Program, using a camera-equipped robot. They appeared to glow in the camera's light.

The new species, discovered in late December 2010, was publicly identified for the first time in a recent article in the journal PLoS ONE.

Though other sea anemones have been found in Antarctica, the newly discovered species is the first known to live in ice. They also live upside down, hanging from the ice, compared to other sea anemones that live on or in the sea floor.

The white anemones have been named Edwardsiella andrillae, in honour of the ANDRILL program. The discovery was "total serendipity," said Frank Rack, executive director of the ANDRILL Science Management Office at the University of Nebraska-Lincoln and associate professor of Earth and atmospheric sciences at UNL.

"When we looked up at the bottom of the ice shelf, there they were," he said.

The mission, financed by the National Science Foundation in the U.S. and the New Zealand Foundation for Research, was to learn more about the ocean currents beneath the ice shelf and provide environmental data for modelling the behaviour of the ANDRILL drill string, Rack said. They didn't expect to discover any organisms living in the ice, and surely not an entirely new species.

"Just how the sea anemones create and maintain burrows in the bottom of the ice shelf, while that surface is actively melting, remains an intriguing mystery," said Scott Borg, head of the Antarctic Sciences Section in the NSF's Division of Polar Programs. "This goes to show how much more we have to learn about the Antarctic and how life there has adapted."

More mysteries remain. Though some sea anemones burrow into sand with tentacles or by expanding and deflating the base of their bodies, those strategies don't seem feasible for ice. It is also unclear how they survive without freezing and how they reproduce. There is no evidence of what they eat, although they likely feed on plankton in the water flowing beneath the ice shelf, Daly said. 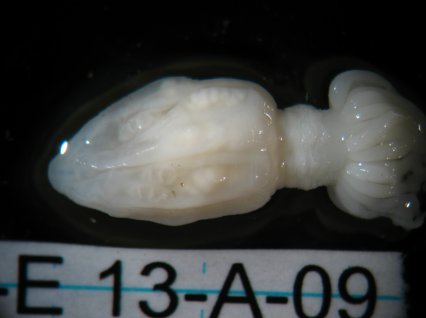 The anemones measured less than an 2.5cm/1" long in their contracted state — though they get three to four times longer in their relaxed state. Each features 20 to 24 tentacles, an inner ring of eight longer tentacles and an outer ring of 12 to 16 tentacles.

In addition to the anemones, the scientists saw fish that routinely swam upside down, the ice shelf serving as the floor of their undersea world. They also saw polychaete worms, amphipods and a creature they dubbed "the eggroll": a 10cm/4"-long, 2.5cm/1"-diameter, neutrally buoyant cylinder that seemed to swim using appendages at both ends of its body. It was observed bumping along the field of sea anemones under the ice and hanging on to them at times.