Why won't this cloudy water clear? 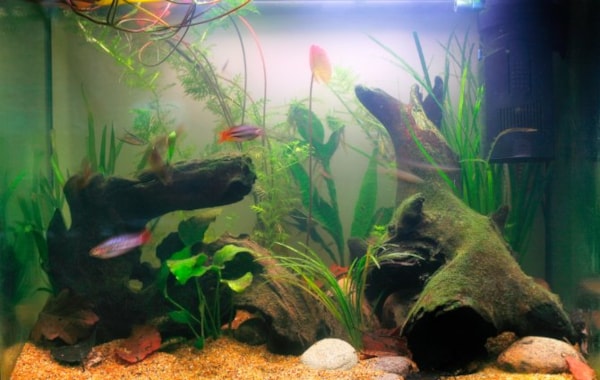 Bob Mehen has some advice for a PFK reader with a cloudy aquarium.

Q) I have a six-month-old 130 l/29 gal tank with a few fish: mollies, platies, Neons and two bottom feeders.

For the first two months it looked lovely, but now the water is a white cloud. I’ve tried every treatment recommended, done many water changes — even 75%.

My local store tested the water and the results were good. I stripped the filter and gave it a good clean. I’ve spent a lot but now I’m starting to lose faith.

A) BOB MEHEN REPLIES: Cloudy water is common, particularly in newer set-ups, but don’t give up just yet!

It’s usually caused by one of three things: microscopic debris in the water that the filter can’t remove, minerals leaching from décor and substrate in acidic water conditions or a bacterial bloom.

Adding a layer of filter wool to the filter should remove debris too small for standard media to deal with, while 'aquarium safe' rocks, sand and gravel shouldn’t affect water chemistry.

A bacterial bloom seems the most likely cause as they often occur in newer tanks as the microscopic bacterial ecosystem that marks a truly 'mature' aquarium takes time to establish, usually considerably longer than six months! However, they usually clear themselves within a few days.

The biological and chemical balance of an aquarium can be upset by many factors, including overfeeding, an unnoticed dead fish, lack of regular changes and fluctuations in water chemistry.

To monitor for these and many other factors get a quality water test kit for the basic water parameters: pH, KH, ammonia, nitrite and nitrate. While many shops will offer a free water test, it’s often hard to see what the result is and ideas of 'very good' can differ wildly.

Something has tipped the balance in favour of the bloom bacteria and some measures may, in fact, be contributing to its continued presence. Over-cleaning of filters can knock back the bacterial populations inside, making them less able to cope with your fishes’ waste and allowing the bloom bacteria to fill the gap.

Check the ammonia and nitrite readings to see if the tank is undergoing a 'mini-cycle' which may be feeding the bloom.

Those large-scale water changes can affect the chemistry of the tank, further retarding filter bacteria, and pH and KH readings in aquariums drop over time due to the bacterial processes within, which is why we recommend weekly changes between 10-25% to help replace lost minerals.

Leave the tank alone. Stop feeding the fish for a week, as healthy fish will be fine, and don’t clean the filter or carry out any more changes for at least a week.

The combination of a drop in fish waste, alongside more stable water chemistry, should allow the bacteria you want to encourage inside the filter to outcompete those floating in the tank, making the tank clear itself.

Check the water chemistry daily during this period for stability. A mature tank should have zero readings for ammonia and nitrite, with the only noticeable change being a gentle rise in nitrate — the end product of the filters’ actions — and a slow drop in pH and KH, especially in soft water areas.