Why has my moray eel stopped eating? 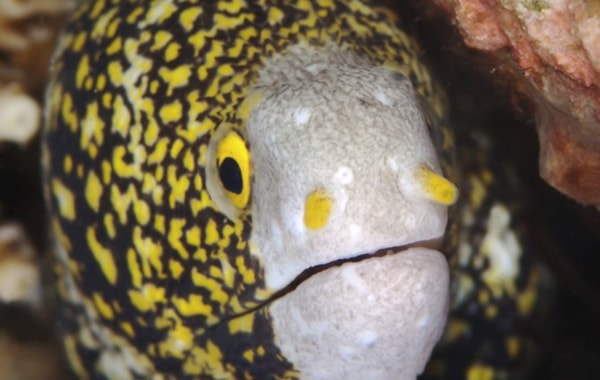 Dave Wolfenden offers a helping hand to a reader whose Snowflake moray has gone on hunger strike.

Q. I have a Juwel 240 l/53 gal tank with a Snowflake moray eel, Porcupine pufferfish and a French angelfish. The tank has been set up for 16 months. Recently my Snowflake eel has stopped eating. When I bought it, it didn't eat for five weeks — this coincided with an article you ran on moray eels where you suggested that when introduced to a new tank they may not eat for a while. So at the time I didn't worry. Both the other fish continue to eat as normal. I have tested the water and the ammonia and nitrite are 0ppm and nitrate is very low (15ppm).

The eel has also become much more active and is swimming quickly around the tank at night as well as digging in the gravel and piling the gravel up at the sides of the tank. I have tried feeding it prawns, lancefish, cockles, mussels and even plaice, but he refuses to take it. I am very attached to it and don't want to lose it. Please could you help?

It is normal for a newly-introduced moray to go on hunger strike for a little while, and these fish can last a surprisingly long time without feeding when first introduced. However, there does appear to be an issue here, and you’re right to take note of the change in the eel’s behaviour — it’s a warning sign that something’s not right. Once a moray starts feeding, it’s pretty rare to see them go off their food for a long time.

One of the most common causes of morays stopping feeding is aggression from unsuitable tank mates, and I think you’ve got a problem here. In fact, I’d suggest that you’re going to have to have a think about the long-term viability of this aquarium.

The first issue is tank size. 240 l/53 gal is just way too small for these fish. Bear in mind that a French angel will grow to at least 30cm/12in in captivity, and whichever species of porcupinefish (Diodon spp.) you’ve got, then you can expect it to reach at least the same size — maybe even a lot more! Secondly, Porcupines and French angels are pretty aggressive, and even smaller specimens can bully and harass tank mates, especially where territory size is limited.

In contrast, Snowflakes have a peaceful demeanour with most fish. I’d put money on the more laid-back moray being the subject of some belligerent behaviour from one or both of its tank mates. The change in behaviour could be a result of this — it seems natural that a stressed, intimidated fish such as this would try to escape from the attention it’s getting, and the digging and gravel rearrangement sounds like an evasive strategy on the part of the eel.

The eel needs to be separated from its tank mates, but you’ll have to plan for the long-term care of the porcupine and angel. I’d suggest that the best option for these two is to be placed in a much larger system. Ideally, you’re looking at 750 l/166 gal minimum for adult specimens of these fish.

The eel will quite happily live in your existing aquarium, and bear in mind that you can keep several in the same tank.