What can I do about this aggressive Angel? 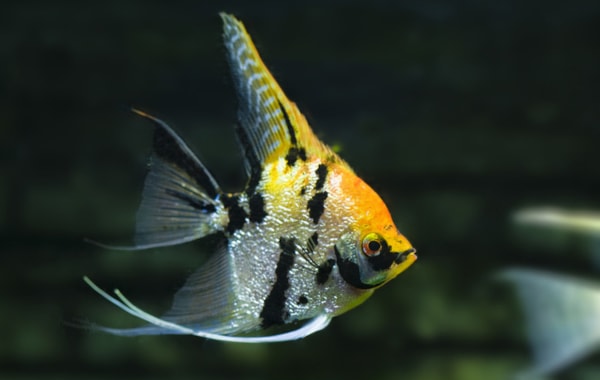 A reader asks for advice on what to do about a bullying Angelfish. Neale Monks advises.

Q: I have an Angelfish in my 90cm long community tank which is about 8cm in size and has suddenly started to bully all the other fish. He chases them mercilessly, especially at feeding time and the Rummynoses don’t even come out now. He was a gift from my daughter so I don’t really want to take him back to the shop unless I have to. Any advice please?

A: Neale says: Angelfish are cichlids in good standing, and the idea that they’re peaceful community fish is not entirely true. Rummynose tetras are notably sensitive to their environment, and in the presence of a territorial Angel, I’m not surprised that yours have ‘gone to ground’, so to speak.

But like any cichlid, Angelfish behaviour is generally consistent, provided you know a little bit about them. In the wild, they are gregarious when young, but when sexually mature, mated pairs will vigorously defend their territories against their own kind. The size of the territory varies, but extends something like 30cm in all directions from a suitable spawning site, such as a piece of submerged wood. Outside of spawning they may form loose aggregations once more, but their behaviour in the wild is not well studied, and it’s unknown to me how much time adult fish spend in groups compared with the time spend as breeding pairs.

In any case, farmed Angels are known to be somewhat different to wild Angels in behaviour. They’re less nervous and skittish, as well as notoriously unreliable parents.

So, how much can we transpose from their natural behaviour to the aquarium? Hard to say, but the flip between peaceful schooling and territorial aggression is something many aquarists have seen once their Angels reach maturity, and at 8cm, your specimen is certainly sexually mature, farmed Angels being quite a bit smaller than wild Pterophyllum scalare, maxing out at around 10cm in length. This likely reflects the fact our farmed Angels are not just a hybrid between two or three wild Angelfish species, but have also been selected for traits other than size over the decades.

One approach here might be to determine where the Angel has laid down its roots, and rearrange the tank so that its territory is in one corner of the tank. Since Angelfish territories rarely extend more than 30cm from their spawning site, it’s possible to free up the rest of the tank if you can get the Angel staying in its own corner. Sometimes, just the simple act of rearranging a tank and then reintroducing the fish is enough to reset everyone’s social behaviour. With the fish cooped up in a bucket while you move the rocks and plants around, they have their territories taken away from them. You rebuild the tank, and then put the peaceful fish in first, like the tetras. They swim about and settle in, preferably with the lights out. After another half hour or so, you can add the Angel. So far as it knows, it’s in an entirely new bit of the river, with no idea who or what lives here. It’ll take a while for it to become confident enough to claim a territory, and if the Rummynoses are part of the scenery, rather than a threat, it’s less likely to act aggressively towards them.

You could also try placing a mirror in one corner of the tank for an hour or two a day. Cichlids will sometimes respond to reflections of themselves as if these were another fish of their own kind, and this can distract them sufficiently well enough that they ignore dissimilar tankmates. This worked for me with a Red devil cichlid in a mixed Central American community, but bear in mind that constant displaying to another fish can be exhausting, so take the mirror down if your Angelfish looks like it’s had enough!

The one thing I won’t recommend here is adding more Angels. Groups of at least six specimens (and preferably eight or more) can settle down peacefully, but your tank would be too small for that many Angelfish.