What can I add for algae control? A reader is looking for a clean-up crew to help with algae.

Q) We have a lovely 260-litre Juwel Vision aquarium that houses a selection of coldwater fish and, if my calculations are right, is stocked correctly — but please let me know if I’m wrong. It houses one Oranda, three Moors, three Calico fancies, eight Zebra Danios and a Hillstream Loach. All the fish are juveniles. I’m looking for a bit of a clean-up crew and something to help with the algae. The single Hillstream Loach does its best — there were others, but they didn’t last. We’ve also had Nerite snails in the past, but their eggs were difficult to remove from the wood, and Cherry Shrimp were an expensive snack for my Oranda. Is there anything else we could consider?

A) Jeremy advises: Coldwater algae eaters are always a contentious subject, but they’re something that aquatic stores are asked for a lot. I find hillstream loaches to be good algae eaters to the point where I need to farm more algae on wood and rocks outside before bringing it in for them to graze on. If yours isn’t making much of a dent in it, try adding more, so long as the tank is big enough. Hillstream loaches do prefer very strong water flow, however — which your fancies definitely don’t.

Some stores place Common Plecs in pond vats in summertime and they do an amazing job, but even at 260 l, they will outgrow your tank. Chinese Algae Eaters, Gyrinocheilus aymonieri, are good and cool water-tolerant, although they become territorial, and hungry ones may ‘graze’ off the sides of your goldfish. The same is true of Garra species. South American Bulldog or Rubber-lipped Plecos may be an option though, as they don’t exceed 10cm in length and will stay out of the way. It’s worth mentioning though that if your algae is, in fact, cyanobacteria (blue-green algae), nothing will eat it. 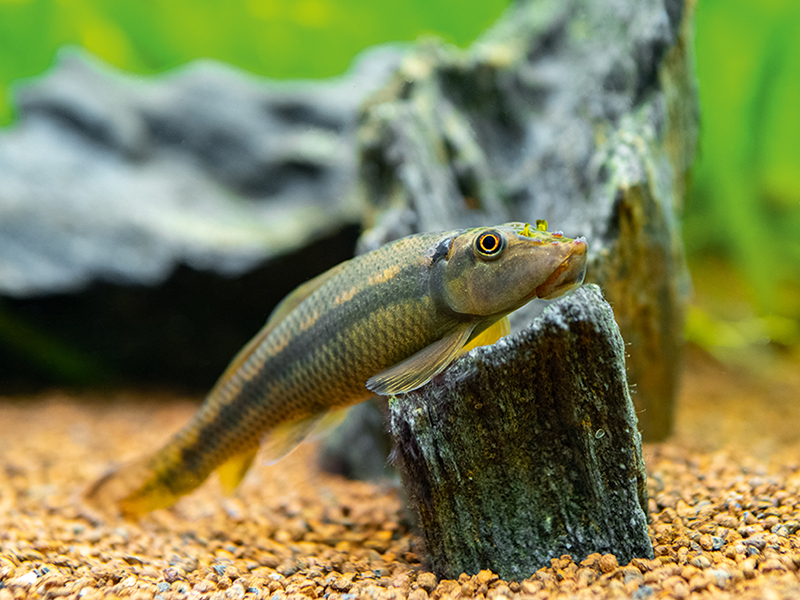 To be honest, the real issue isn’t about adding the temperate algae eaters, so much as the mixing of any wild type fish with such heavily domesticated fancy goldfish, which are best kept with their own kind. Algae could be controlled in other ways, such as lessening the light levels by turning the light off when you aren’t viewing the fish, and just more maintenance to keep it at bay.

You could also have a lovely temperate tank without the goldfish, and could create an unheated stream-style tank with lots of temperate Asian species like loaches, barbs and danios — then you could include Garra and give the Hillstream Loach a more natural habitat tank, where they could really thrive as well as keeping the algae in check.