How do I keep this puffer? 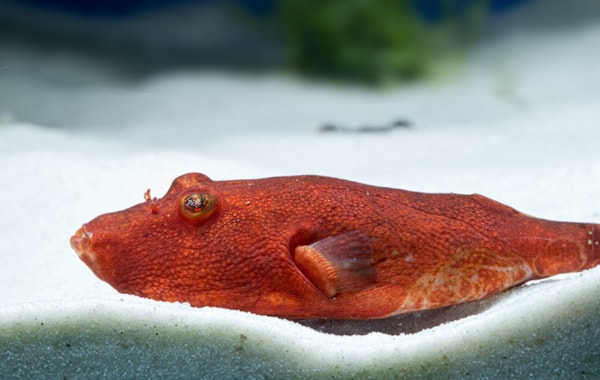 Q: Please would you be able to identify this puffer for me? It was just labelled as a Red puffer at the shop and I didn’t buy it in case it wasn’t suitable. Please could you give me some information on keeping it, as I’d like to go back and buy it if I can supply the fish with what it needs.

A: Neale says: From the picture you sent, this would appear to be a Red Congo puffer, Tetraodon miurus. This is a medium-sized species (up to 15cm long) and native to the Congo basin of Africa, where it occupies quite a specific ecological niche. Whereas most puffers swim about constantly searching for snails, crabs, and other crunchy prey, the Congo puffer digs into the sand where it waits for small fish to swim into range. When they do, it launches itself upwards, snatching at them from below. It’s largely found in fast-flowing streams and rivers, and to some extent its peculiar shape must be an adaptation to this, helping to reduce drag.

Given these habits, the species does need a quite particular sort of tank. Obviously it isn’t going to do well with other fish, and indeed the species is notably intolerant of its own kind, so usually ends up being kept on its own. A sandy substrate gives it something to dig into without damaging its skin. Being a rheophilic species, a brisk water current is needed; I’d suggest a water turnover rate of at least 8-10 times the volume of the tank per hour.
If your filter isn’t quite up to this, adding a powerhead or even a few airstones will do the trick nicely. As with most rheophilic species, you’ll find this species does well if the water is well-oxygenated and low in nitrate, so alongside decent filtration, regular water changes will help keep your pet in tip-top condition.

While the wild fish are piscivorous, aquarium specimens are rarely fussy. Once settled, they’ll take earthworms, mussels, squid, lancefish, and all the other meaty foods you’d offer to a medium-sized puffer. Being rather inactive, daily feeding isn’t necessary, and adults probably only need to be fed a couple of times a week. On the other hand, their all but sedentary nature means they don’t need a huge amount of space — 80 to100 litres is ample. You aren’t going to be keeping this puffer with tankmates, but there’s nothing to stop you decorating the tank with bogwood, rocks, and plants as you see fit. Just be sure to keep some open areas for the fish to dig into, deep enough to cover itself almost to its eyes.

Overall then, this species may be demanding in terms of its quite specific environmental requirements, but being fairly small, very inactive, and basically easy to keep, it’s a good fish for the moderately advanced aquarist with space for a single-species tank.