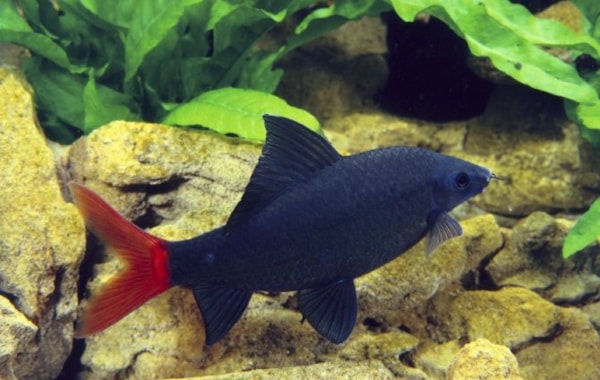 Just how aggressive are these gorgeous fish - and is there any chance of keeping them successfully in a community tank? Bob Mehen has some advice for a reader who'd like to know if their reputation is based on fact or fiction.

Q. When I was a kid my uncle had a great community tank filled with barbs, tetras and catfish but the undoubted star was a Red-tailed Black Shark.

I’ve recently been given a 4ft tank and inspired by these childhood memories I’d love to have a Red-tailed Black Shark as a part of its stock but all you hear is how they are aggressive and shouldn’t be considered for community tanks.

My uncle never had any problems with his and they’re always available in my local shops so what’s the truth with these fish?

A. Red-tailed black sharks (Epalzeorhynchos bicolor) are certainly one of the most striking looking fish commonly seen in the hobby with adults displaying gorgeous velvet–black body colouration set off by that lovely deep red tail. You are right though, they do have a sometimes deserved reputation for aggression and this needs to be taken into careful consideration if you’re planning to stock one.

The first thing to consider is the shape and colour of any fish sharing the tank with them. Obviously you should avoid other freshwater ‘shark’ species such as the Red-finned shark, (Epalzeorhynchos frenatus) or fish of similar shape such as Red-line torpedo barbs (Sahyadria denisonii).

Other bottom dwellers such as Corydoras, plecs and cichlids may also be on the receiving end of a RTBS’s attention so are best avoided.

Fish with tempting trailing fins such as guppies, particularly if they have red colouration are best left out as well.

However robust, active species of barbs and tetra that spend their time in the upper levels of the tank should be fine, especially if stocked in larger shoals where a single specimen is unlikely to be picked out for attention.

Likewise the well-known tank trouble makers the Three-spot gourami (Trichopodus trichopterus) which spend much of their time near the surface are likely to be ignored.

Make sure the tank has plenty of décor in the form of wood, rocks and caves and lush planting if possible to help break up lines of sight and provide hiding places. All this should calm your RTBS and allow it to establish a territory but not at the expense of its tank mates.

Another tip is to add the RTBS last so it’s less likely to consider the other fish as imposters in its territory.

Finally, as with all fish these are individuals and while there are some that seem hell-bent on tank domination others are peaceful, easy going members of the community. Just be prepared to act should you fish turn out to be one of the former not the latter!