What’s the best number of firefish to keep in a group? I have a 400 l/88 gal set-up which has been running now for three months. Will it be mature enough to add a group of these? The tank also houses a pair of Black percula clowns and I aim to add a Yellow tang, a Flame angel and possibly a Royal gramma later on.
CHARLIE NOAKES, EMAIL

Firefish (Nemateleotris spp.) can actually be very tricky to keep in groups — although they are often seen in groups on the reef (making them appear social), they can be aggressive with each other in the confines of the aquarium, and weaker individuals can be harassed to the point of death by one or two dominant fish. Don’t be fooled by the groups of them you may see in the shop’s holding tanks — the fish don’t spend enough time in the tanks, or have sufficient territory to defend, to show their true behaviour. This is a shame, as groups of firefish look stunning in the wild, but it’s hit-or-miss trying to replicate this in the aquarium. It can be done (and having plenty of room makes things easier) but the best way to keep them is one individual fish or an established pair (if you’re lucky enough to get one). 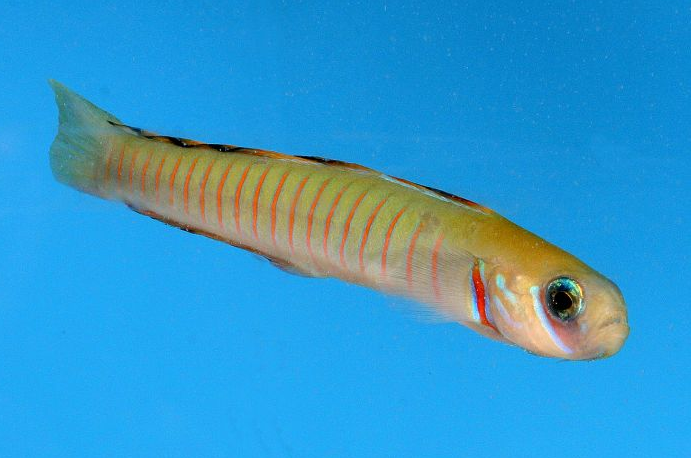 The Zebra dartfish is a closely related species to the firefish, and it can be kept in groups in the aquarium.

Why not consider the closely-related dartfish (Ptereleotris spp.) if you’re looking for a more social species? These fish have similar behaviours, and some species can be kept in social groups, which can look amazing. I’m going to plug the Zebra dartfish, P. zebra, (up to 10cm/4in) here, a lovely-looking and readily-available fish which does very well in groups of several individuals; in a 400 l/88 gal system, you should be looking to keep five or more of these fish, added all at the same time. Their feeding requirements are the same as for firefish — frequent feeds of small items are needed for these planktivores.

Bear in mind that all firefish and dartfish are superb jumpers, so a covered aquarium is recommended, and they require a sandy area and plenty of hiding places.
DAVE WOLFENDEN