Can I breed these gobies? A reader would like to set up a Biotope-type aquarium for Stiphodon Gobies. Neale Monks advises.

I’ve been keeping and breeding fish for about 10 years. I have a tank going spare which holds approximately 120 l and I’d like to set it up as a biotope-type aquarium for Stiphodon gobies with a view to potentially breeding them. I can’t find any information about whether this has been done successfully before, so I wondered if you would be able to give me any pointers at all, please?

Neale replies: To answer your question, the ecology of Stiphodon needs to be understood. Stiphodon come from oceanic islands and coastal streams fringing the Indian and Pacific oceans. The species seen in the aquarium trade typically come from places like Japan, Hong Kong, Malaysia, and the Philippines.

The adults inhabit freshwater streams, yes, but rarely more than a few miles inland. These habitats are otherwise lacking in freshwater fish faunas because to get there, such fish would need to pass through the sea first. So, instead of the usual cyprinids, loaches, and other classic freshwater fish families, these streams are populated with invaders from the sea, such as eels, flatfish, and of course, gobies. All of these have adaptions that allow them to move between freshwater streams and the sea at different points in their life cycle. In the case of Stiphodon, the adults don’t move around much, but the fry do.

When Stiphodon spawn, they produce large numbers of eggs – as many as 10,000 in some cases. These are protected by the father, as is common among gobies.

When they hatch, tiny fry emerge, around 1.5mm in length, which are only partially developed. Being so small, they are quickly washed away in the current, drifting downstream until they reach the sea. During this time they develop some more, and they only have functional mouths three days after hatching! Once in the sea, they join the rest of the marine plankton, presumably feeding on algae and smaller planktonic animals. 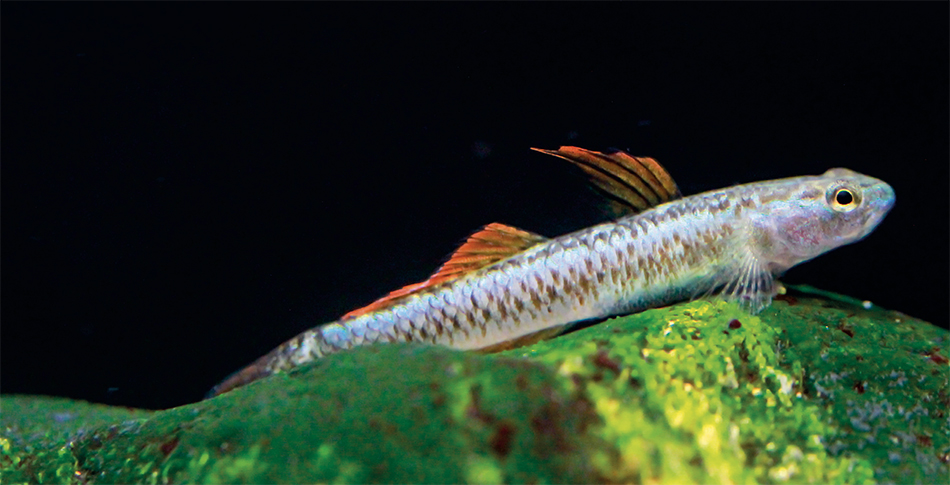 A male stakes his claim to a rock.

Over the weeks they grow and develop, finally metamorphosing into small but recognisable juvenile gobies. What happens now isn’t too clear, but they presumably detect changes in salinity that indicate freshwater discharges into the sea, and using those as navigational cues, slowly make their way into estuaries and eventually upwards into the rivers and streams they will occupy for the rest of their lives.

While Stiphodon will spawn quite readily in captivity, rearing the fry has, so far, proven to be very difficult. Two challenges are immediately apparent. The first is adjusting the ambient salinity around the fry at the right rate. While lab-work has demonstrated that newly hatched Stiphodon percnopterygionus larvae take three days to develop functional mouths, it’s by no means certain that this number holds true for all species. Furthermore, identifying Stiphodon species can be difficult, so even if data is acquired for a variety of species, how well these apply to the fish in front of you is hard to know. Some experimentation is needed here, even assuming that the time between hatching and when the larvae are capable of feeding indicates the time span required to adapt the larvae from freshwater to saltwater conditions.

The second big challenge will be feeding the fry. Even when they have mouths that work, these fry are barely 2mm long. Marine infusoria will be needed, and again, some sort of experimentation will be needed to find the right variety of foods, as well as the correct feeding frequency.

Stiphodon are attractive fish very well suited to hillstream biotope tanks with cobblestones, sandy substrates, a few bits of bogwood, and plenty of bright light to stimulate the growth of the green algae and aufwuchs they prefer to eat. Social behaviour is complex, with territoriality between males obviously apparent, but at the same time, a certain degree of gregariousness among the females that makes the species extremely interesting to watch. But their reproductive biology is so complex that we’re not even close to having a reliable protocol that works for even a single species.