Can I add a Firemouth or two? 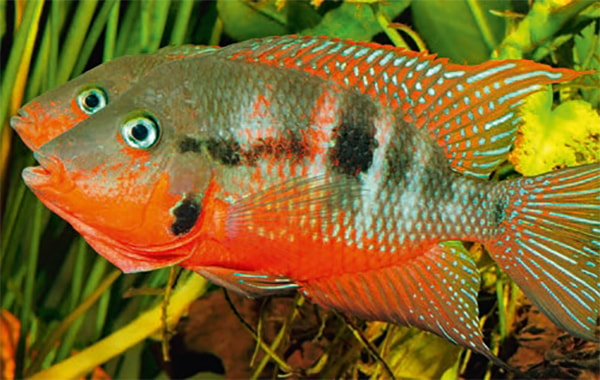 Jermey Gay gives his advice to a reader who would like to add a couple of cichlids to her tank.

Q) I have a tank of approximately 400 l with six Praecox and five Boesemani rainbows and a shoal of eight Ruby barbs. There are also two Yo-yo loaches in the tank and a juvenile Bristlenose. I’d like to add a couple of cichlids to this tank and I was thinking possibly Thorichthys, either the standard meeki or T. ellioti if this would be better. The tank is well planted with lots of bogwood but I could easily add a flowerpot or coconut shell or two. Is this feasible or would I be asking for trouble?

A) JEREMY GAY ADVISES: Either Thorichthys meeki or ellioti (now renamed maculipinnis) would do well in a tank of that size, and with those robust tankmates. I fi nd Firemouths to be very nervous fish at fi rst, so the barbs and rainbows should help them to relax, settle in and realise that it’s fi ne to be out in the open. Add four juveniles of one of these species (not both) with the aim being that two sexed pairs will form. Males are larger. Have pairs form and you’ll get that brilliant gill flaring and red throat that Firemouths are famous for, and the pairs two and fro at each other, which makes for a great visual display.

Both species will spawn with or without flowerpots and coconut shells, but it’s when they spawn that the trouble will start. In a tank of that size, if lines of sight are broken and territories divided up by the bogwood, you may get away with a pair guarding eggs and fry without killing everything. But try to create potential spawning sites at one end of the tank, instead of in the middle. That will also make it easier to put a divider in if you need to, as they will see the barbs, rainbows, loaches, and members of their own species, as potential egg and fry eaters.

Both species improve with age, and most Firemouths look very washed out in the shops. Both are substrate dwellers and sifters, feed and behave in the same way, and grow to a similar size. They aren’t fussy about water chemistry, and I’ve bred them in both hard and soft water. I’d say that of the two, T. maculipinnis are easier to breed, but also more aggressive, but the choice is yours.