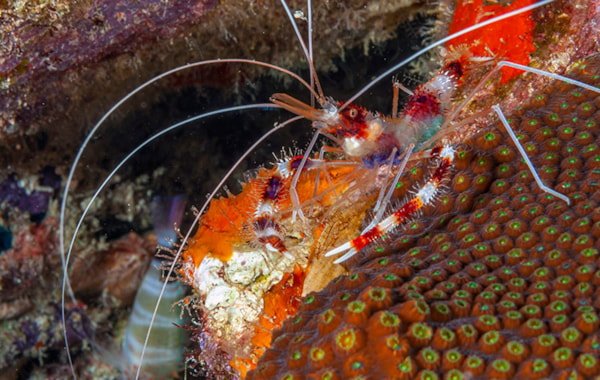 Jeremy Gay offers his advice to a PFK reader who found his Boxing shrimp eating one of his blennies, and is worried his other fish might be at risk.

Q) I have a 120 l reef tank which contains a two Scooter blennies, two Common clowns and a Pyjama wrasse. The corals are mainly LPS. I also have a Boxing shrimp which is quite large. The tank has been set up for about five months. Yesterday I was horrified to find the shrimp eating one of the blennies. I didn’t realise they were predatory. Is this type of thing common with Boxing shrimp?

If so, I’m concerned that my other fish might also be at risk. Is it possible that the shrimp is not getting enough to eat? I don’t feed it directly although there are usually plenty of leftovers. Should I remove the shrimp?

A) JEREMY GAY REPLIES: Boxing shrimp are borderline reef safe inverts. Although showy and interesting, they do grow, become more reclusive, often hiding around the back of the rocks in the daytime, and have been known to bully other shrimp. There are reports of some eating fish, although I would like to think that the Scooter died, and the shrimp was caught eating the corpse. All Scooter blennies, Mandarins (and dragonets,) are really difficult to keep long term, so the blenny may itself have run out of food and died of starvation. Daily feeds of live copepods is recommended with these fish, although even then the Pyjama wrasse will outcompete them, so make sure that the wrasse has filled up on frozen Mysis shrimp first, before adding the copepods.

If all was well with the blennies, then, yes, the Boxing shrimp may have been hungry. Try to target feed it with Mysis and Krill, which it will catch in its claws. Although wonderful things in their own right, not many successful, long term reef tanks contain Boxing shrimp, so I’d probably look at taking it back to the shop at some stage.