Nathan Hill sings the praises of the Zebra danio - a fish that has survived practically everything that's been thrown at it!

The danio has encouraged many into the hobby, graced community tanks the world over, saved human lives and even been sent into space by NASA to see how it swims in zero gravity.

Yet through it all, this fish has managed to remain dapper.

Not only are there websites dedicated to tracking their wild strains, they’re the sole subjects of a peer-reviewed journal entitled Zebrafish. You can subscribe to it for $499/ £318 a year!

They’ve also been abused. Placed into the wrong aquariums, plunged alongside goldfish or genetically altered to make them more aesthetically pleasing. Most unanimously agree that such tailored variants are the tackiest of gimmicks – myself included.

Zebra danios are astonishingly tolerant of a wide range of conditions, which is why it’s all the more remarkable that some people still manage to kill them.

We know more about laboratory Danio rerio than wild strains. We know captivity has altered their selective pressures, so that farmed Zebras will have a higher fecundity (ability to produce offspring) than wild fish, while the latter exhibit a far greater degree of predator avoidance and restlessness than captive ones.

Restlessness is how wild danios evade being eaten and a trait often mistranslated as a requirement for fast water. It seems to make sense to give a highly active fish plenty of current to swim against…

Seasonally they make their way to temporary streams called nalas, the result of monsoon weather, to spawn. For a long time they were considered lowland inhabitants, but recent expeditions have found them at 1,800m/5,900’.

They prefer turbid waters with limited visibility and lab tests have shown that they repeatedly favour areas in dark conditions, even when there’s food involved.

D. rerio are predated in the wild but fish don’t seem to be the dominant consumers. Considering that they are close to snakeheads (Channa sp.), Needlefish (Xenetodon), Knifefish (Notopterus) and Mystus bleekeri, it seems odd that so many end up inside kingfishers and herons and not so much in other fish.

There are some population controllers, mainly Spiny eels (Mastacembelus armatus) in particular, spending much time mopping up eggs and larval danios. Other fry predators include dragonfly larvae.

Commonly found alongside D. rerio is the Indian flying barb (Esomus danricus) which can compete for resources, as both species make their living by feeding on mosquito larvae and other aquatic insects.

With this in mind, biotope aficionados should be rubbing their hands with delight… 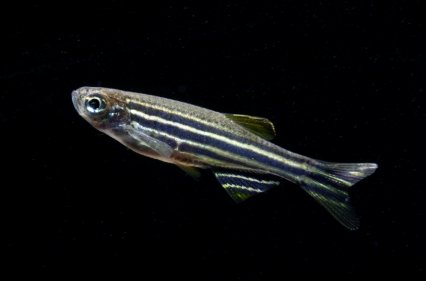 The Zebra danio thrives because of its incredible tolerance of conditions and temperature.

They are the living equivalent of asbestos, adapting to temperatures that would frazzle a weaker individual. In their native range they have been found up to 39°C/102°F and lab tests suggest they can exist briefly when the water is even hotter.

That fireproof skin also doubles as a duvet, with Zebras found down at 6°C/42°F.

This ability ensures that D. rerio not only graces tropical tanks but also unheated, temperate tanks. Unfortunately this is mistranslated as ‘goldfish compatible’ and young danios have been eaten by goldies. Even larger ones can appear terrified of these unknown fish when in their presence.

Water chemistry variations are also shrugged off. In the wild, habitats can vary anywhere from a pH of 5.1 with little hardness, to a much chalkier and more alkaline 8.2pH.

These are versatile fish, for sure, and a real reward for the aquarist prepared to go the extra mile and give them a biotope set-up. 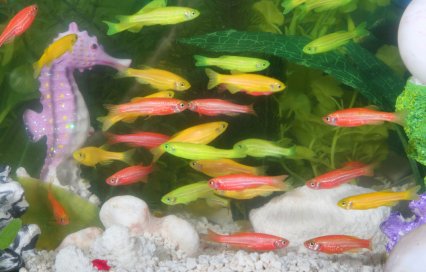 The glowing mechanism is an important tool in understanding just what goes on inside a danio.

Fluorescing history had started in 1962 when Osamu Shimomura isolated glowing proteins in jellyfish.

In 1992 the genes of this protein were sequenced and understood and further fluorescing genes were sought in organisms other then jellyfish.

Eventually, it was possible to enhance the brightness and colours produced.

Jellyfish genes can be injected into a danio ebryo, and ‘plugged in’ to a part of the fish’s own DNA sequence. Wherever the fluorescing gene has been introduced, glowing proteins are created, be that the heart, blood, brain, eye — anywhere.

Fluorescing genes are even used as timers. These start green, but turn red when protein production stops, allowing researchers to record what’s happening inside the fish.

Glowing is just the tip of a huge GM iceberg, with thousands of genetic variants now being available to researchers, from alterations in colour to changes in organ structures.

Even 'wild type' strains in laboratories have been genetically cleaned up to remove any undesirable attributes — such as high infant mutations. 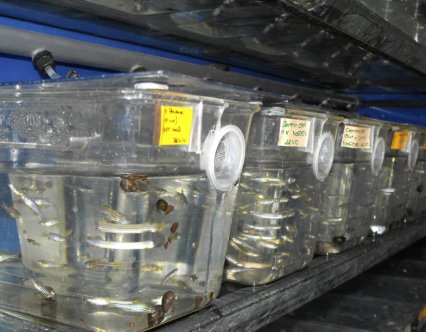 Laboratory interest in Danio rerio is attributed to George Streisinger, the first man to clone one — making danios the first cloned vertebrates.

However, they have been used in laboratory research since the 1930s.

Their contribution to science is huge. They are small, easy to spawn, very robust and develop quickly. In fact, in 36 hours they’re at a stage of development that would take a mouse 21 days. They’re also easier than mice to manipulate at a genetic level.

Embryo transparency is a huge advantage, as is the accessibility to larval fish compared to other organisms. Instructions even exist  on how to remove young danios from the chorion (egg shell) and rear them in petri dishes.

Their transparency and quick development mean that experimental results are fast and, given that in lab conditions they can spawn every two to three days, there’s a plentiful supply.

Danio rerio are now so big in science that there are more than 5,000 committed danio researchers spread over more than 450 labs. If you ever fall ill, it might just be a Zebra danio that fixes you… 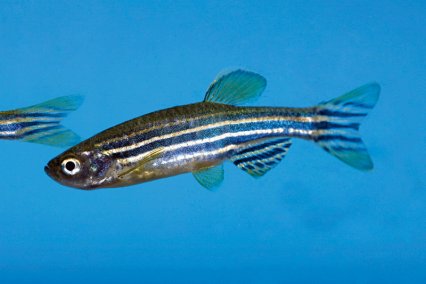 There are easily available farmed varieties and then there are wild-caught individuals. The third avenue is closed to us in the UK and Europe — genetically enhanced Glofish.

GM livestock is illegal to import here, so any seen in retailers’ aquariums shouldn’t be there – unless the law changes. Let’s hope not.

Some commercial producers have felt the need to increase this fish’s desirability by 'tweaking' them. Expect to see long-finned Zebras (and Leopards), as well as albino strains, ‘golden’ strains, and even a fledgling balloon variant. It goes without saying that such a purchase is a matter of taste — or lack of.

Chances are that lay fishkeepers haven’t seen a wild D. rerio, but if they do they’ll be converts for life. No farmed danio can come close.

The gold markings are more golden, the blues deeper, and the behaviour more erratic, more wild, more natural. To look at one is sensing that you’re looking at something ‘clean’. They’re my hands-down choice every time.