Nathan Hill visits a man so consumed by cichlids he's often called MalawiMikey. Meet Mike Bonnick, a man who will sell what he raises to help fund his fishkeeping passion.

Many aquarists like to find a niche. There are catfish buffs, tetra fans and loach lovers. London-based Mike Bonnick’s journey has been with cichlids — to the point where his collection has a house all of its own.

Mike is a well-known face in cichlid circles and rightly so. He sources some of the finest fish you’ll find and what he doesn’t keep he sells on, making his addiction self-supporting. Funds from private sales go towards running costs and further purchases. Going under the pseudonym of MalawiMikey, his name gets about…

Home to Mike’s passion is a 6 x 3m/20' x 10' fish house in his garden and just a walking catfish’s stroll from his back door. This isn’t entry level we’re talking either. This insulated shed house is Mike’s pride and joy, for, as he says, he wanted to do this project once only so wanted to do it right. Step inside and you know he succeeded.

It all came about after Mike’s redundancy from a former career. The idea of a fish house had lingered for a while and he’d sized up a garage conversion. In the event, when the time came and the opportunity presented, he scratch-built his own facilities.

Over the course of just beyond a year and also doing odd jobs at the time, Mike constructed his own cichlid den — splashing out on blocks and roofing.

He opted to use the type of insulation you might find within the walls of saunas to retain that precious heat. With a little professional help, he hard-plumbed everything together and installed his own electrics.

The aquariums were a fortunate find. He’d not been looking, but when an opportunity to buy old glassware from a retailer having a refit presented itself he snapped up the tanks on the spot. Then he combined them with old Woolworths racking he’d acquired.

Together, and with piping and electrics in place, he just needed to finish the room off, which he did with a layer of waterproof tiles on the walls and frames.

The journey to completion hadn’t always been smooth. In the early days Mike had some issues with electrics, especially combined with the intense humidity of the house.

Heating had been a problem, too. Mike would originally heat the whole room, making a controlled temperature environment. The reality, though, was of a room unbearable to work in for any length of time. Now the tanks are individually warmed.

The cost of a venture like this is far more than pocket money! Mike estimates that to build something similar from scratch, at full retail prices, you’d be lucky to walk away with change from £20,000. Considering his lucky buys and resolve to self-build, Mike thinks he did it all for around £5,000.

Of that, his most expensive outlay was the roofing. A satisfactory, insulated and rugged one set him back £1,000 alone.

Does Mike have any regrets about embarking on this project? Only slight reservations. Holiday opportunity is one, as he’s now unable to take any length of time away. Electricity bills feature too, and although reluctant to be specific Mike hints that four-figure sums are now the norm.

He advises anyone thinking of taking the same route to consider the timescales involved, too.

You need to be pretty devoted to get into this level of fishkeeping and Mike racks up an average of two to three hours a day completing all the necessary chores in the fish house. 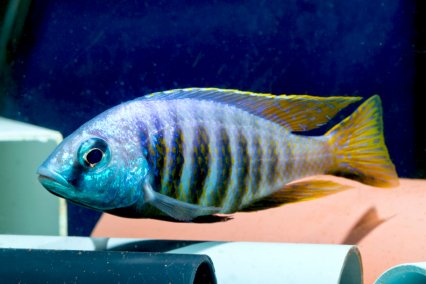 You don’t get a name like MalawiMikey by being into Asian loaches and once you step into the fish house it’s obvious how Mike picked up his moniker.

Throughout the 49 tanks there’s little but cichlid, aside the occasional catfish. Moreover, the vast majority is from the Rift Valleys of Africa — some directly so as Mike is known to import from Malawi itself. 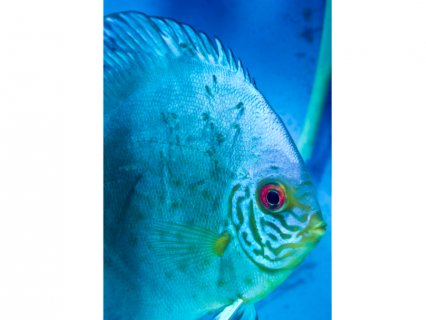 Mike’s been a Malawi and Rift fan for 35 years, formerly having a thing for New World fish like Discus. He still has a hook on that former love and a quick nose about reveals immaculate Symphysodon, not just sat as collectables but rampantly spawning, the adults still as the young graze nutritious mucous from their flanks.

However, Africans dominate Mike’s collection of fish; bright, bold and breeding cichlids that would make anyone who isn’t into the genre think about taking the plunge. Even the staunchest catfish supporter might walk away converted by this spectacle.

What’s really striking is the volume of wild-caught fish as opposed to the usual more drab or undersized fare often churned out by mass-producing farms in the Far East and Czech Republic.

Mike appreciates that wild fish are different beasts to farmed fish and ranks them somewhere closer to marines.

These fish have never been exposed to levels of nitrates or phosphates, let alone ammonia or nitrite, and their sensitivity is a world apart from farmed variants.

That’s why Mike runs a nitrate filter on all water coming in to his house. Aside that, he doesn’t feel the need to tinker with his water. If anything he revels in stability.

Given his location many parameters aren’t an issue. The water coming in is already nicely alkaline and with a hardness of 18°GH and 12°KH there’s little need for buffers. Regular water changes keep on top of replenishing levels.

When it comes to water changes, all those hard-plumbed pipes make things a lot easier and Mike usually opts for a 30-50% change of tank at a time.

Many tanks have ingenious home-made dividers to keep aggressors separate or to isolate fry.

These are simply constructed from electrical conduit, combined with blocks of pond filter foam, creating a barrier that only water can penetrate.

The filters are self-made too. Large pond block foams, slid over pipes glued on to flat acrylic, and with air line poked down the top, work a dream. 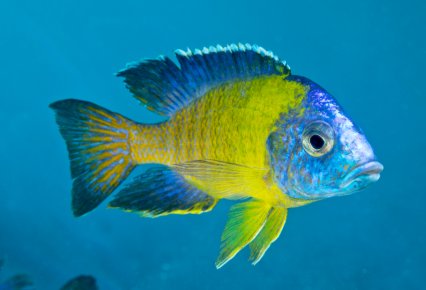 What Mike’s doing to keep these fish happy is certainly having the desired effect. The colours are well up there with, and maybe even beyond, many marine species and he’s even been accused of photoshopping to enhance images of fish posted online.

Feeding all of his fish takes time and involves a few ingredients. New Era’s cichlid/herbivore diet ranks highly, as does Spirulina flake and New Life spectrum in bulk-sized buckets.

For the copious fry, he uses a mixture of Spirulina from a health food shop, artificial rotifers and flake food powdered in a pestle and mortar.

Mike Bonnick is the daytime alter ego of MalawiMikey —  a man retired from a life in advertising and now devoted to fish.

He’s always been a fan and when young was transfixed by his grandfather and father’s fishkeeping projects. On one visit to his grandfather 55 years ago he found a galvanised frame in the garden and asked if he could have it.

After a little botching with it, Mike had constructed his first set-up.

He doesn’t profess to be in fishkeeping for money or fame, he just enjoys what he does. Along the way he hopes that at least a couple of his regular visitors will have been inspired to try a fish house of their own... 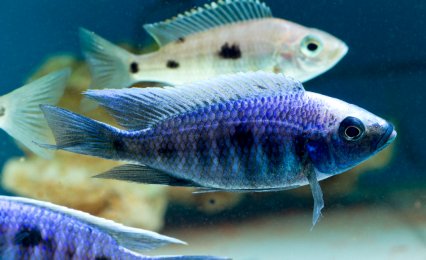 Mike is first and foremost a hobbyist, and a seller second. In fact he advises anyone thinking of following his example not to do so purely for the money!

Although sales of fish help fund his venture, there’s not enough revenue to consider Mike’s activities profitable. At best it buys an occasional meal out for himself and his wife after a particularly lucrative few months.

That’s not to say his fish aren’t worth buying. Mike has a broad customer base, with buyers travelling from Birmingham, Devon, Portsmouth and Leicester — and once even a viewer from Scotland.

However, you’ll need to ask in advance if you want to visit, for Mike’s not a high street touter of trade.

When new fish arrive he’s as fussy with that stock as the most stringent retailers. Any fresh delivery will see him up until the small hours, tending to their acclimatisation and care, and even after that he’s forever using his microscope.

Mike doesn’t have many issues with wild fish but notes the occasional sign of an eye fluke or intestinal worms.

He’s particularly vigilant for columnaris bacterial infections and only too aware of the havoc an outbreak could cause.

When I visited Mike he had many species on view. Some are available to buy, others are part of his personal collections or as breeding projects. Here’s a taster of what I saw: 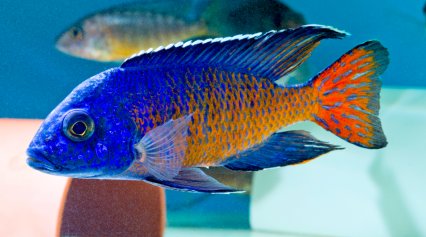 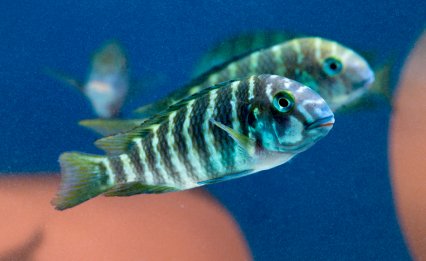 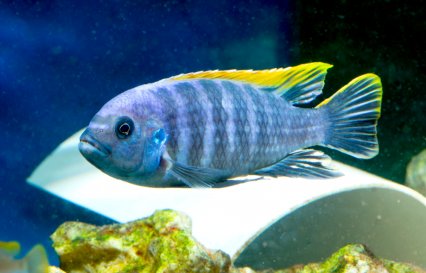 Even this list omits Mike’s oldest fish — a one pectoral-finned Synodontis that lost its limb in a fight with a Frontosa. Mike’s had him for more than six years.

Check out some of our other readers' fish houses: