John Robertson is baffled as to why killifish are not universally popular. His reasoning seems pretty strong...

There are hundreds of species of small, bold killifish displaying brilliant colours and flamboyant fins. Most are peaceful and many easy to keep and breed.

Killifish are egg-layers of Cyprinodontidae and distantly related to common livebearers such as platies and swordtails. They are widely distributed in shallow waters of tropical and sub-tropical regions on every continent except Australasia.

Yet they are rarely found in your average dealer’s tank. Maybe it's because most don’t carry a recognised common name.

Almost all are known only by their scientific name, perhaps discouraging the ordinary hobbyist just wanting something pretty for the living room community tank.

Although many are easy to breed they reproduce in small numbers, which discourages commercial fish farms and keeps prices high. Many prefer soft water and don’t do well in harder tapwater. Many also require live or frozen foods too.

Because they are not seen often and have such special requirements they are usually kept apart in small species tanks.

However, none of these reasons should deter you. You can find them at good prices, there are killies for all conditions and some will greedily eat flake food. Many are also fine with other quiet fishes — so why not think killie? 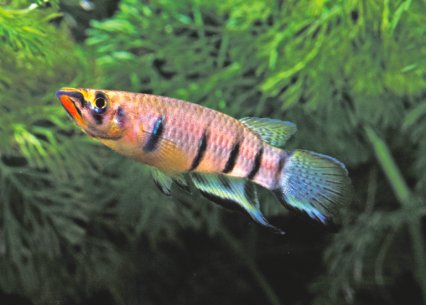 The Red-throated panchax (Epiplatys dageti) pictured above comes from West Africa and is a lovely fish of about 5cm/2” that’s well suited to community tanks.

Other African species that would behave with small fishes and suitable for beginners are Fundulopanchax gardneri, Aphyosemion australe, A. striatum, A. bivittatum and A. congicum (pictured below by Hristo Hristov). 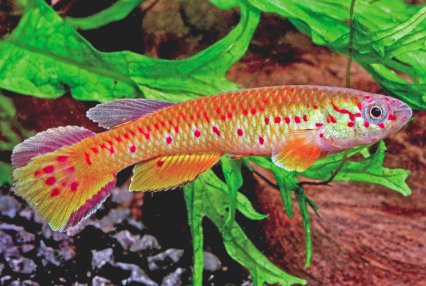 All have stunning colours, are active, bold and enchanting as they dart about and flirt with females. They are also easy to breed.

Most killies prefer soft water. My tanks are heavily planted with Java moss and Indian fern with a layer of oak leaf litter on a bare base. A gravel base is OK for many, though not for the bottom spawners.

Most killies don’t like it too hot and I keep mine at 21-24°C/70-75°F. Although hardy and OK in small tanks without filters or aeration, killies appreciate regular water changes. I change at least one-third each week.

While many species can be accommodated in community tanks with similar-sized fishes, quiet tank mates are appreciated, unlike fin nippers like Tiger barbs or aggressive cichlids.

All killie tanks should be covered, as all are skilled jumpers. That flat topped head and upturned mouth is perfect for top feeding and live and frozen foods are preferred. I feed mine newly hatched brineshrimp or Grindalworm most mornings and frozen bloodworms or mosquito larvae in the evenings. 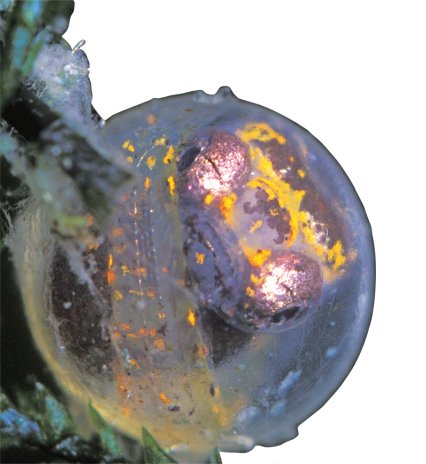 Most are either top or bottom spawners. The former include the panchax of Africa and Asia, Aphyosemion and most related genera of West Africa and the Rivulus of South and Central America. In nature they inhabit streams and pools shaded by rainforest and, amply supplied by equatorial rainfall, their environment rarely dries out.

They lay eggs in the upper reaches of aquatic plants or in fronds of overhanging vegetation.

Many top spawners are particularly easy to breed and would make excellent projects for the less experienced aquarist.

Smaller species can be kept and bred in small tanks and 30 x 20 x 20cm/12 x 8 x 8” is popular for a pair or trio of Aphyosemion. Males are ardent suitors and females can be harassed, so get more females than males. If healthy, the fish will lay eggs almost continuously, a few each day. Instead of plants many breeders use mops of natural wool for the eggs.

Some young will survive and grow alongside the adults, though serious breeders search the mops for eggs. These can be handled without fear of damage and are easily transferred to a plastic hatching tray (margarine container) filled with a couple of inches of water from the parent’s tank.

In a warm fish room, or floated in the parents’ aquarium, newborns can be spotted easily when the eggs hatch in 14-21 days. Most fry eat baby brineshrimp without any difficulty and after a few days can then be transferred to a larger rearing tank.

The young grow fast and can be sexed at 12 weeks.

This category is less easy to breed than top spawners.

In less wooded areas, such as the African savanna or South American pampas, the sun beats down on their natural habitat ponds and streams and they evaporate, disappearing for months.

The lineage has therefore evolved only by burying eggs in the substrate, remaining moist as the homes diminish and adults perish.

The hatching period varies from six to eight weeks for some species of Fundulopanchax, four months or so for Austrolebias and up to six months for Nothobranchius rachovi and Callopanchax occidentalis.

The eggs develop spasmodically with periods when the embryo growth is halted, yet remain programmed to hatch with seasonal rainfall when the pools refill. The fry are large and ravenous and in some species are themselves breeding at only six weeks.

They have to make the most of the rainy season and complete their life cycle in only a few precious months. 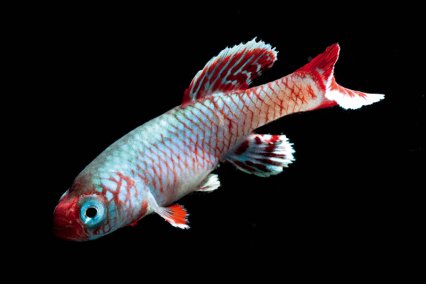 Bottom spawners are more complicated to breed, but include Nothobranchius — some stunning freshwater fishes. N. eggersi (above) is the easiest I’ve tried and the eggs hatched six weeks after drying.

Most bottom spawners are best kept in species tanks. Feisty even among themselves, they should have more room and more dense cover than top spawners. I use tanks of 60-75cm/24-30” 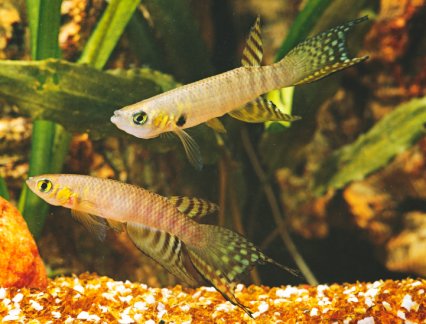 Some South Americans, such as Pterolebias (pictured above) and Austrolebias, only spawn when the male drives the female into the soil. Replicate this scenario by putting peat fibre into a jar to a depth of several inches and placing it in their tank.

The eggs can be handled and removed, but I drain the fibres through a net every week or two and allow to dry, leaving the medium just moist. I then store in a sealed polythene bag in the dark a couple of degrees cooler than the parents’ tank.

I mark the bag with dates of collection and expected hatching. When hatch date comes I submerse the medium in clean tank water in a container and watch for fry. In some species of Nothobranchius the young hatch within an hour. With the Argentine pearl (Austrolebias nigripinnis) fry appeared over a couple of days.

If your eggs don’t hatch immediately, dry them again and wet later.

Another group of spawners

In between top and bottom spawners there’s a third intermediate category called switch spawners and several Fundulopanchax, such as Blue gularis, fall into this group.

These are flexible in breeding strategy, with some populations laying eggs in the substrate which await a dry period before hatching, while others of the same species lay eggs among plants that never dry out.

Hatching periods for this group tend be from six to 12 weeks.

I prefer my killies in bigger tanks as I like to see groups interacting, males displaying to rivals, flirting with females and chasing energetically. I leave the eggs in the parent’s well-planted tank and, in most cases, enough fry survive to create a species colony.

Recently I created a colony of Chromaphyosemion volcanum by adding two pairs to the 1.5m/5’ tank they shared with some Vietnamese white clouds and a collection of Centromochlus schultzi catfish. These were up to 15cm/6” long and swift when emerging from driftwood dens to feast in the evening. Nevertheless, they posed no threat to even the smallest killie fry.

C. volcanum, growing to 5cm/2”, is from swift streams and happier in gently flowing water. Half my tank was heavily planted and in the flow of the power filter the volcanum danced and displayed to each other.  Every day they spawned, laying single eggs among plants. This tank was almost entirely rainwater and the killies grew well on bloodworms and glassworms. Temperature was 26-29°C/78-80°F.

A month or so later I spotted the first fry. They were camouflaged and kept to the dense surface Indian fern, and every day I added baby brineshrimp to the planted areas. At four weeks the young were 15mm/0.6” and started showing the dark stripes typical of the Chromaphyosemion group. From that point they grow fast.

Soon I had about 20 and in a few months it was hard to tell young from parent. At 2.5cm /1” all the youngsters moved to deeper water. As they approached 5cm/2” males formed display groups of three or four, stretched fins and reflected a variety of colours, seemingly in recognition of their hierarchy level.

Females watched from the shadows. Every few minutes a male would break from its rivals to chase and pose in front of potential mates. At times these killies chased with all the energy of danios, but to see this behaviour properly you need a fairly big tank. 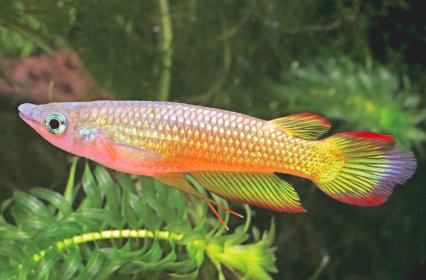 The only common killies are Asian panchax, such as the Golden wonder (a form of Aplocheilus lineatus) and A. panchax. These are excellent for medium-sized communities but not your typical killies.

These are hardy, robust and eat all foods. They are also easy to breed by placing a pair in a separate, well-planted tank.

Yet they are attractive rather than stunning, grow larger than most killies and are reputed to eat smaller fish.

They could be a risk if not well fed and would relish baby guppies or platies born in your tank!

Soften hard tapwater with RO or peat filtration — or collect rainwater in a plastic butt. Some killies, however, can be kept in harder water, particularly Nothobranchius, though soft water is best for breeding.

The Aphanius from Mediterranean Europe, North Africa and Middle East are beautiful fish, living and breeding in cooler, brackish water. They are among many killies with a limited range and therefore vulnerable to pollution or habitat destruction. 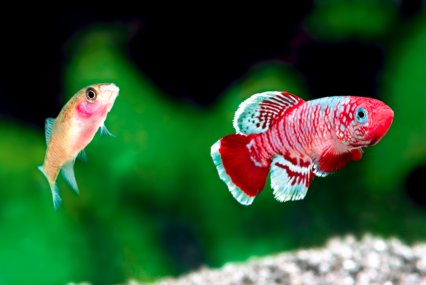 You’ll rarely find them in shops, so go to a British Killifish Association auction. Last year I visited one at Wigginton, near York, and saw many good fish for sale, mostly under £10 per pair.

Similar BKA auctions are held regularly around the country, so visit the BKA website for more details.