Weather loaches and how to keep them Emma Turner spotlights a remarkable air-breathing loach that can survive for several hours out of water and, by its body actions, also predict storms.

The Weather loach may not be the most flamboyant of fish, but its fascinating behaviour and endearing personality more than make up for such a shortcoming.

Few others can survive in little, or stagnant water — and surely fewer still are thought to be able to predict bad weather. This is truly a remarkable fish.

Native to Myanmar, much of North-eastern Asia and down towards central China, Misgurnus anguillicaudatus is found in many systems — from flowing rivers and streams to quieter waters of swamps, ponds, and rice fields.

These intriguing eel-shaped loaches, which are members of the family Cobitidae, find sanctuary in the silt or mud-rich substrates, meandering through leaf litter and resting with heads protruding from often dense cover. 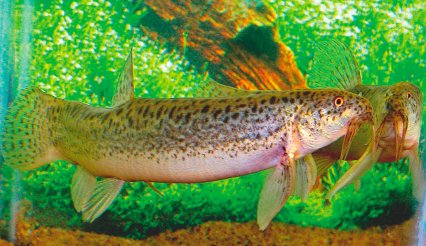 Being peaceful and hardy, this species is ideal for the aquarium. Specimens are easy to care for and should be maintained in small groups so they can interact socially and you can watch their antics.

In the wild, Weather loaches live within a surprisingly large temperature range, dependent on location. In the aquarium they should be kept at a steady sub-tropical temperature within 15-25°C/59-77°F. They have been known to tolerate lower and higher extremes, but are most comfortable within this range.

Adults can reach 25cm/10", but slightly larger wild specimens have been reported. This size dictates the proportions of the aquarium: 36" long being minimum for a juvenile and at least 48" when adult.

It should also be as wide as possible, so the fish have a large footprint to explore, and be well covered to prevent these expert jumpers escaping. 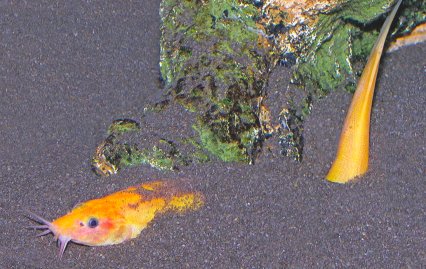 Weather loaches enjoy travelling through the substrate, so it should be smooth and soft like aquatic sand. If you must have gravel buy a very fine smooth grade, as anything sharp could easily damage their 'scale-less' skin and those delicate barbels.

Although this species is often considered relatively forgiving of less than ideal water conditions, you can’t let things slip. As with all loaches, good filtration and a frequent partial water change regime will be key to your fish’s well-being.

Plants tolerant of temperate conditions can be grown in the Weather loach aquarium, but these fish tend to mischievously dig and uproot them.

Small rock piles or pieces of bogwood placed around the stems can help prevent this happening.

Instead invest in species such as Anubias, Java fern and Java moss, which can be tied on to and trained to grow on bogwood.

Weather loaches will accept many foods, but offer a good variety. Some specimens will even eat small snails, searching them out with their five pairs of sensory barbels. Sinking pellets and frozen foods such as mosquito larvae and Daphnia will be eagerly taken.

The fish may feed from your hand as this species seems to enjoy human contact. They will often actively seek out the fishkeeper’s hands when he or she is carrying out maintenance.

In their opinion these are worthy of curious investigation!

Provide your Weather loaches with several hiding places, as although they can be very active they tend to rest for the best part of the day and come to life in the evening and during the night.

They can be safely kept with most temperate community fishes, but avoid species which could be spooked by a loach’s sudden, unpredictable darts around the aquarium. Anything aggressive should also be avoided, as should any really tiny fish or fry.

Standard coloration is highly variable, but usually a yellowy-brown body, mottled with dark green-grey to dark brown speckles and with a lighter coloured belly.

A small and often indistinct dark blotch is present on the upper end of the body at the junction with the caudal fin.

A rarer golden variety is much sought after. These range from an overall yellow to orange or pinkish colour and sometimes sport blotches of dark brown/black pigment. Most are not true albinos, as they have dark eyes, although the occasional one occasionally turns up in batches of the golden variety. These variants of the same species mix well together in the aquarium. 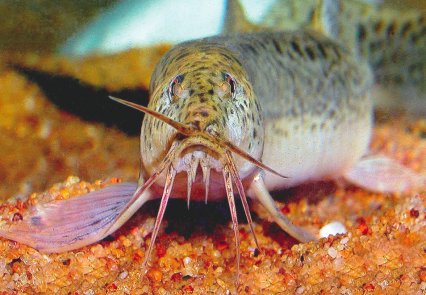 Weather loaches have evolved to live in many ‘temporary’ locations, such as ponds, streams, and man-made rice fields where water often becomes stagnant and therefore low in oxygen. In some areas the water may even dry up.

These loaches have developed ways to cope with such extremes — most noteworthy the ability to breathe air. Their modified intestinal tract can extract oxygen from gulps of air taken from above the water surface. At the same time air is expelled from the vent, giving the impression that the fish is experiencing a wind problem.

This means the species can survive harsh aquatic environments — so leave a gap of air between the surface of your aquarium water and the cover slides.

Their ability to produce a layer of mucus to keep themselves moist also comes in useful when out of water – for instance, in a temporary pool which dries up, or if they successfully escape from an uncovered aquarium.

Couple this with that ability to breathe air and many a panicking aquarist has been mightily relieved when, after finding their Weather loach on the floor — where it may have been for several hours — they have returned it to the aquarium to make a miraculous recovery.

These remarkable creatures have also been known to negotiate some short stretches of land between waterways in damp or wet weather.

The common names Weather loaches or ‘weather fish’ came about because of this fish’s apparent sensitivity to changes in barometric pressure.

It’s said that these ‘living barometers’ become far more active if a storm is approaching.

Many fishkeepers, particularly in countries with more volatile weather, maintain that as pressure drops the loaches become restless, frantically swimming around, sometimes jumping and splashing. 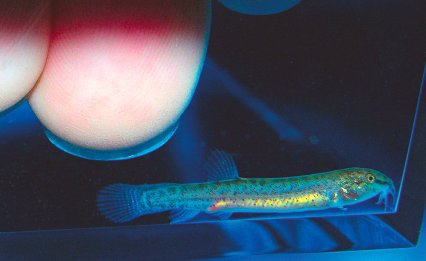 Breeding is a rare success

Reports of captive spawning are few and far between. In the wild they spawn annually after going through extreme seasonal changes. Aquarium spawnings are said to occur when mature pairs have been conditioned with live or frozen foods, subjected to higher than normal temperature and then given frequent cooler water changes.

The final trigger seems to be a sudden dramatic increase in flow. Large batches of small adhesive eggs were reportedly then laid near to the outlets of the filters and powerheads.

I documented a successful chance breeding at a Maidenhead Aquatics store in Lincoln several years ago and not long after the store had opened. Prior to official opening to the public, the systems were already maturing and certain hardier species had been housed in some tanks — including a batch of good-sized Weather loaches.

While the act of spawning went unseen, eagle-eyed staff spotted the tiniest movement in the gravel in a sump tank and a thorough search revealed three fry. These were just over 2cm/0.8” long, so presumably were just a couple of weeks old.

The adults in the system above had not been in the store that long and, as it was new, extra water changes were being carried out to limit nitrogenous wastes while the system was still becoming fully mature.

A pair must have formed and found the different water, large slightly cooler water changes and more current enough to get in the mood. I took the fry home to nurture over the next months and they took most foods with gusto and rapidly grew. 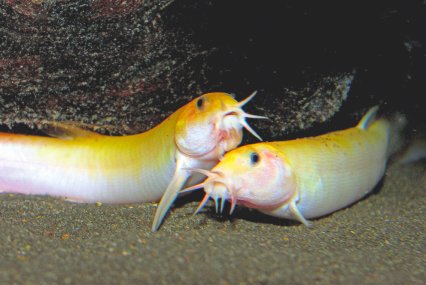 If sexing your weather loaches, look at their pectoral fins. Mature males (as pictured above left) have a thicker and longer second ray, giving them an almost triangular appearance. In the female (pictured right) the pectoral fins are smaller and rounder and she is often fuller in the belly.

Many loaches are difficult to breed and a lot of alleged spawnings have never been backed up with proof. If you have had any degree of breeding success, please take photographs and as many notes as possible, as these will be invaluable to other loach enthusiasts.

The impact of careless introductions

Misgurnus anguillicaudatus have been carelessly introduced into waterways of non-native countries, where they have firmly established themselves. Australia is one country reporting adverse ecological impact following such introductions during the 1980s.

Weather loaches have also been released in Italy, the Philippines, parts of the USA, including Hawaii, and Germany where breeding populations are well established.

This species is not considered a threat to UK water systems because temperatures drop too low during winter, hence they are still available in our shops.

However, a similar species, Misgurnus fossilis, was banned from the UK several years ago as an accidental release was considered a threat because it can tolerate the lower temperatures of our waters.