Want to try something new in reefkeeping? Looking for the next challenge? Can we make a success of azooxanthellate coral tanks? Jeremy Gay suggests making a bold move with a future marine project.

We can do soft, LPS and even SPS corals with ease these days, so where is the next challenge for the enterprising reefer? The answer is non-photosynthetic corals.

These include more common species like Sun corals (Tubastrea spp.) but also the brightly coloured and considered near impossible Dendronephthya and Scleronephthya, and the gorgonians such as Acabaria, Acalcygorgia, Melithaea and Subergorgia.

You could be the best SPS coral propagator in the world, yet success with these creatures is far from guaranteed. With non-photosynthetic or azooxanthellate corals it isn’t about light, as you might expect. Instead it’s to do with the right type of water flow, delivered the right way over a 24-hour period, and feeding. 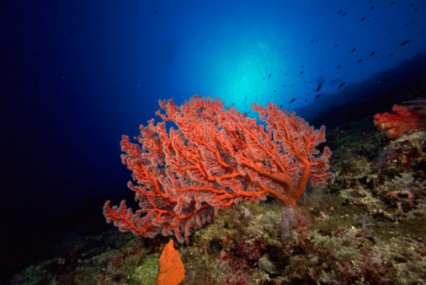 Water flow
Divers and naturalists are aware that gorgonians, or sea fans as they are also known, are usually found at depth, projecting at right angles from rock walls where their branch-like structures collect food particles from passing currents. The flow is known as laminar, moving uni-directionally, and the corals position themselves to expose maximum surface area to catch food. In strongly tidal zones the flow will also reverse over a 12-hour period.

This leaves the reefkeeper facing a most interesting conundrum, as most of us have just spent the last 15 years equipping our aquariums to replicate the brightly lit reef crest where photosynthetic corals grow in chaotic and ever changing flow conditions.

A complete rethink will be necessary to provide the right flow conditions for these plankton-eating corals and, 99 times out of 100, a completely separate tank set-up too.

Flow must be uni-directional,  and not too hard you may think, but that flow must also be capable of keeping the plankton in the water column for as long as possible to give the corals the best chances of capturing them.

Say goodbye to any mechanical filtration, as this will remove the precious food source. Initial trials, placing gorgonians in a tube as part of a closed loop, showed promise, although it will not look anything less than a science experiment if you choose to display them that way in your home. 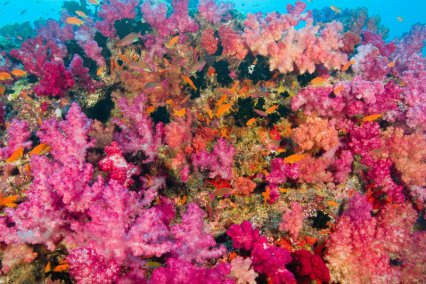 Capture possibilities
A separate sump-style arrangement with baffles arranged in a similar way to an algal refugium may work, or even the 'manifold' pump and pipework arrangement used by many freshwater loach keepers.

Replace the sponge strainers with more open plastic ones and your plankton may recirculate many times, offering excellent capture possibilities.

Install ball valves in recirc pipework or inline taps into manifolds so that you can control that flow too.

Just to make things more complicated, it’s also about tethering that flow so the polyps can open to their maximum and create an eddy that moves prey towards them. Too much flow and they can’t open or function properly. Much experimentation is needed and, to make things worse, preferred flow velocity varies from species to species!

Zooxanthellate corals derive some energy from the symbiotic zooxanthellae algae that live within their tissues, so secondary feeding of other foods like phytoplankton or zooplankton isn’t as critical as with the gorgonians, and heavy feeding of zooplankton, although benefiting many light-loving corals and other organisms, can add to the biological load and nutrient poor environment we are wanting to create.

Azooxanthellate corals rely totally on food capture for their nutritional needs so — like fish — no food, wrong food or improper diet will end in death.

It was thought that zooplankton was the main requirement for azooxanthellate corals, though smaller phytoplankton are now also believed necessary, along with many other foods like bacteria and nutrients like amino acids.

Luckily they are available, so how much food do we offer and how often?

Provide suitable foods in terms of nutritional content and capture size as and when you can. Some public aquariums even pump in natural seawater 24/7 to try to get adequate results.

A quick Internet search reveals mixed results if considering keeping what many deem impossible. Don’t bother as azooxanthellate coral tanks are too hard, say many industry experts and scientific peers — yet search on and you’ll find photographic evidence of a growing number not only working but appearing to thrive.

That leaves another conundrum: whether to invest time and resources in giving it a go and risking failure, or simply leaving well alone. No one wants dead corals and that is a huge strain on the world’s resources in terms of collection, shipping, transport, packing and energy, but without someone prepared to give it a go we wouldn’t be where we are now with SPS corals!

This item first appeared in the June 2010 issue of Practical Fishkeeping magazine. It may not be reproduced without written permission.