Jeremy Gay speaks to the creators of the world's largest planted aquarium to find out how they put the 40,000 litre system together.

Words can hardly describe this amazing aquarium— the pictures simply say it all.

We’ve reviewed an amazing range of aquariums in PFK, though this one may be the biggest and best yet. It has been created by nature exhibit design consultants Green Chapter who have also produced many of Singapore and Malaysia’s best public and private aquatic exhibits.

We first heard about Green Chapter while viewing the results of the AGA (Aquatic Gardeners Association 2005) competition — and saw that these consultants had entered a stunning 12,000 l/2,640 gal paludarium, the likes of which we had never seen before.

Years later we visited Singapore and got to see some of their work in aquatic shops, zoos and the aquascaping competition at Aquarama. We’ve been hooked on the work of the company ever since.

This was the brief given for the planted mega tank pictured here and created on an exclusive residential property in Malaysia.  We would perhaps add “dream tank” to that description, as for many this would optimise all their aquatic aspirations if size and budget were no object.

At 40,000 l/8,800 gal capacity it must also be the dream tank for the fish stocked within it — apart from the Tinfoil barbs as mentioned on the next page  — as this holds more than 200 times the volume of an average aquarium

So how would you choose which species would have what is the privilege of living in this aquatic Garden of Eden? 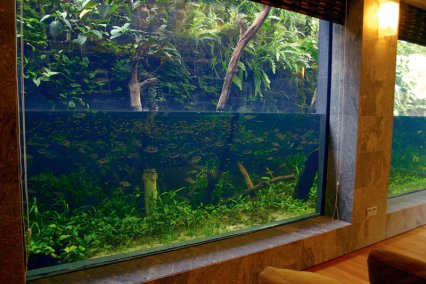 The combination of natural daylight, open air and lush terrestrial planting overhead makes this aquarium all the more special. There are Archerfish in there too, so  relaxing and watching them jump and spit for inspects must be an amazing spectacle. And oh to live in a hot country, as water temperature remains stable at 26°C/79°F all year round.

So as you sit back, satisfied after your feast this Christmas, take the time to feast your eyes on the immense spectacle and scale that is this aquarium.

Surely this is what every fishkeeper wants for that ultimate Christmas present? 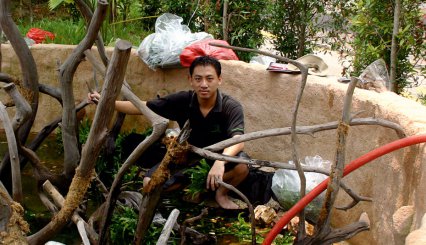 Having turned his personal passion into a lifetime’s pursuit of excellence, Roland offers a wealth of creative and practical knowledge into designing, installing and managing aquascapes.

He also has design expertise of wetlands and freshwater habitats from across the world, as well as a constantly expanding repertoire of knowledge of freshwater animals and plants and their care.

We asked him some quick questions about this tank:

Where is the tank located?

It’s at a private house in Malaysia, surrounding the basement bedroom in a L-shape. It was commissioned in late 2006 and we have been maintaining it ever since. Its volume is estimated at 40,000l/8,800 gal. and comprises 70mm/2.8” acrylic panels

How is it filtered and what is the maintenance regime?

Three pumps push water up to the filter chambers and it returns by gravity. There are five inlets spread out among the pond. The first filter chamber is a vortex, followed by a bio-brush, then ceramic rings with bio-matts.

Maintenance is done twice a month when we snorkel in to clean the acrylic panels and sometimes prune the plants or insert fertiliser root tabs. 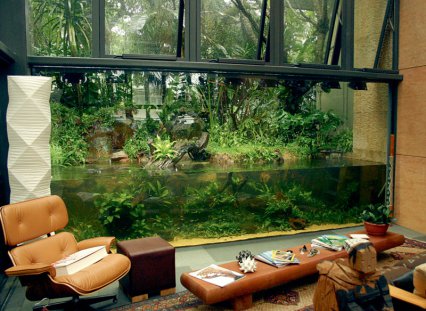 Is it lit solely by natural daylight or does it also use electrical lighting?

It uses 100% natural sunlight. The land plants and a planted tree provided some shade and, coupled with a 2m/6.5’ waterfall and frequent breeze, the water is naturally chilled at around 26C/79°F, even under full sun.

The only items of equipment using electricity are the three main pumps.

Roughly how many plants did you add and why did you choose those species?

There is no specific theme for plants and we used an assortment of them. We chose hardy species that we think can survive in this tank.

There was a problem when we were asked to add 40 small Tinfoil barbs. They ended up growing to 20cm/8” long and eating nearly all the plants. We had to fish them out and replace the plants! The fish then became a BBQ meal for the housekeeper and his friends.

What fish are in there, and how many?

Eventually the T-barbs grew too big and we suspect they started eating the small rasboras.

How many people completed the tank, and how long did it take you to finish

A gang of general workers and a crane was deployed to build up the slope system, substrate with base fertilisers and gigantic rocks that formed the waterfall. This took about two weeks.

The actual planting took four of us two full days. It was quite an experience, like planting rice!

The introduction of water took another two to three days.

Is this the largest planted tank that you have ever constructed?

It was not constructed totally by us and part of the wetwork was undertaken by the main contractor building the house. However, this is by far our largest tank and we snorkel and dive under 1m/39” of water. We even needed to wear weightbelts when planting and trimming. 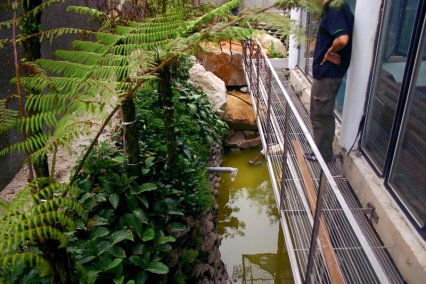 Is that a walkway constructed above the tank?

Yes, and that’s from where the owner can really appreciate the view when walking out of the living room. To access the water, we have to climb down the big rocks at the waterfall.

Have there been any problems, like algae? If so how have you overcome them?

The tank had never had algae nor green water problems, which had been an initial fear. We believe it’s been problem-free because of several factors:

There’s a large water surface with a good breeze to keep the water cool.

Shade is provided by vegetation and trees around and over the tank, providing more coolness and less direct sunlight.