Over the forty-plus years Ian Fuller has kept and bred Corydoras, he’s seen many twisted tales emerge. Here he looks at straightening a few of them back out.

Corydoras, a perennial favourite amongst aquarists and a catfish more often kept than not. With such a vast following, and over such a long period of time, it stands to reason that various myths and legends have been born around these diminutive bottom dwellers.

The catch is that some of these myths, despite being widely perpetuated on social media, could be detrimental to their care. Corydoras is a large genus, with many hundreds of species, and to say that we know everything about them would be folly. Still, there are some things we know not to be true about them. Here, Corydoras expert Ian Fuller picks out a handful of those myths still in common use… 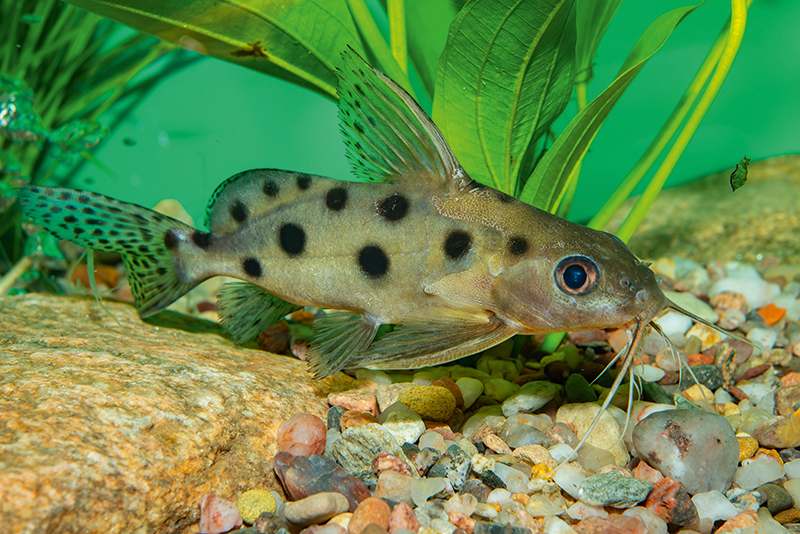 This is 100% wrong and it is my belief that the confusion was originally born from the fact that many ‘naked’ catfishes, such as those in the Bagridae and Mochokidae families (catfish that lack any kind of scutes or armour plating), are notably sensitive to salt.

Over time, such is the way of mass communication that words either get misused or left out. So instead of ‘naked catfish’ it becomes contracted to ‘catfish’ that are intolerant of salt, then that gets to encompass all species indiscriminately.

It is certainly okay to treat an ailing Corydoras with a salt bath to fix a fungal infection, or as part of quarantining wild fish. Having said that, as far as we know there are no species that naturally inhabit saline conditions in the wild, so I would not add salt to their aquarium water as a prophylactic, as I have seen advocated. Over time the salt levels will continue to increase (salt does not evaporate from water) and eventually become problematic. Most species inhabit soft acidic water with low conductivity. A pH of 5 and a TDS of 50 ppm or less is not uncommon. 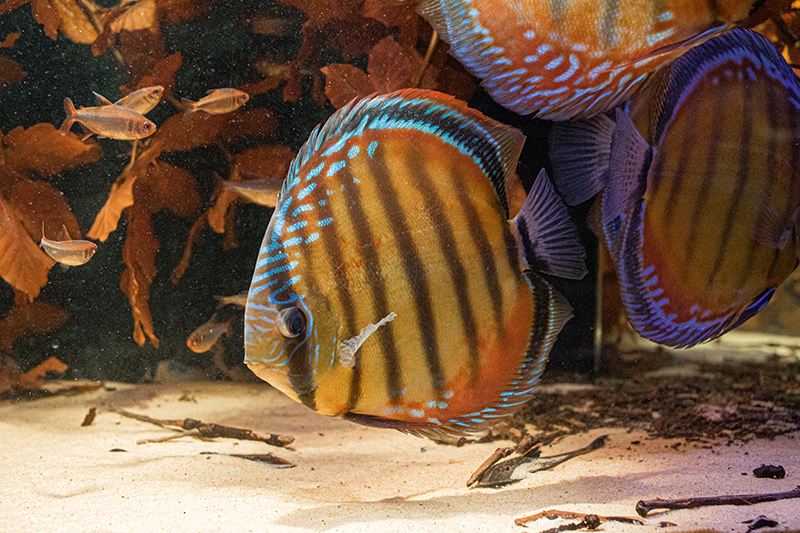 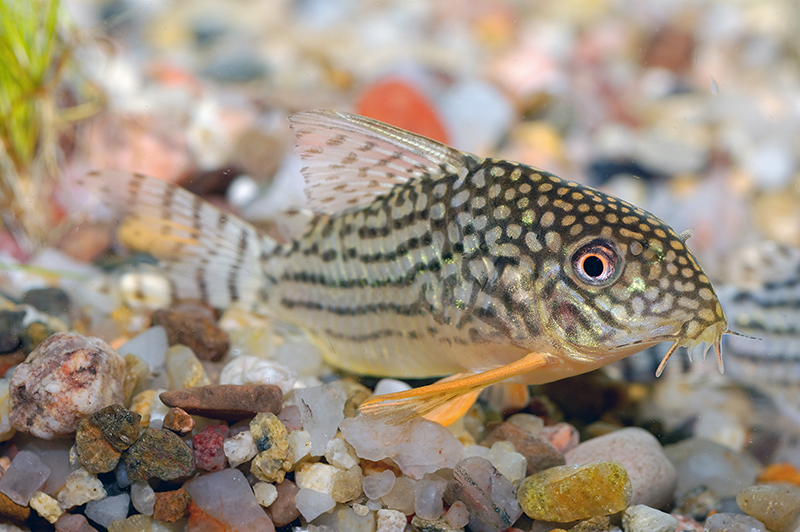 Probably the most annoying (for me at least) is when I see Corydoras advertised as the ‘cleaner crew’ for community aquaria — even worse when the warmer-tolerant species such as C. sterbai and C. gossei are expected to be a clean-up crew for a high temperature discus tank.

In this latter example, expecting an omnivorous species to clean up after a fish fed a primarily carnivorous diet (as many discus are) is bad news. The catfish will eat what’s there because they have no choice, but the high fat and protein content of commercial discus foods are unnatural to Corydoradinae and cannot be digested efficiently. In time, this can lead to a fatty build up around the catfish’s internal organs which will eventually cause failure.

There is only one ideal animal for the clean-up task and that is you, the aquarist! 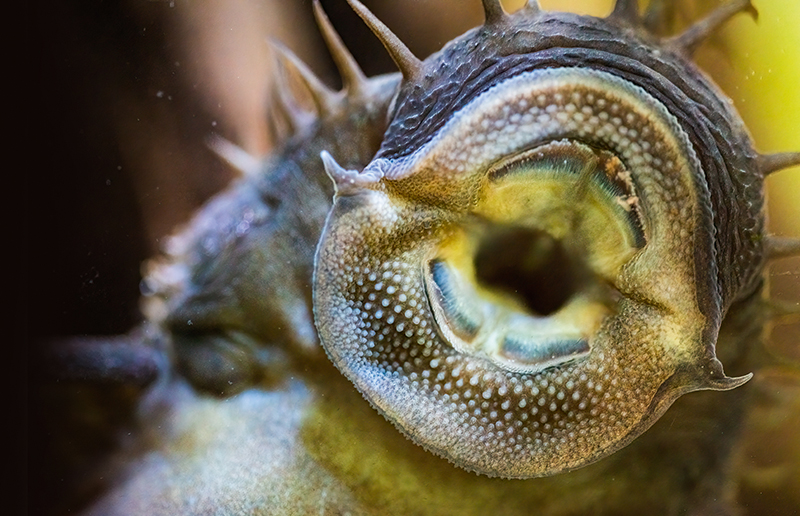 Algae eating often requires a more specialised mouth, as on this Ancistrus.

This is a fairly new misnomer, but it’s doing the rounds, and peas, courgette and cucumber can also be encompassed in this.

Corydoradinae catfishes do not have grazing or rasping teeth of a suckermouth catfish and as such they cannot easily remove algae from rocks, roots and other underwater objects. They do mouth through algae growths in search for microorganisms, crustaceans and insect larvae and will inevitably ingest some algae, but this is not considered a significant or necessary part of their natural diet.

Like the salt myth, I think that it has become a ‘catfish fits all’ belief, based on the fact that many catfishes graze on algae — think of the suckermouth Loricariid catfish, as well as some Mochokidae species, plus many other species worldwide. Many Corydoras species will be seen mouthing algae wafers and their owners are adamant they are eating the wafer, but in truth it is more likely that the binding agent holding the wafer together is the attractant, and probably has more nutrition than the vegetable material it is binding together (for example, the main ingredient of one of the most popular algae wafers on the market is white fish meal, which is meaty enough to get a Corydoras catfish’s attention). 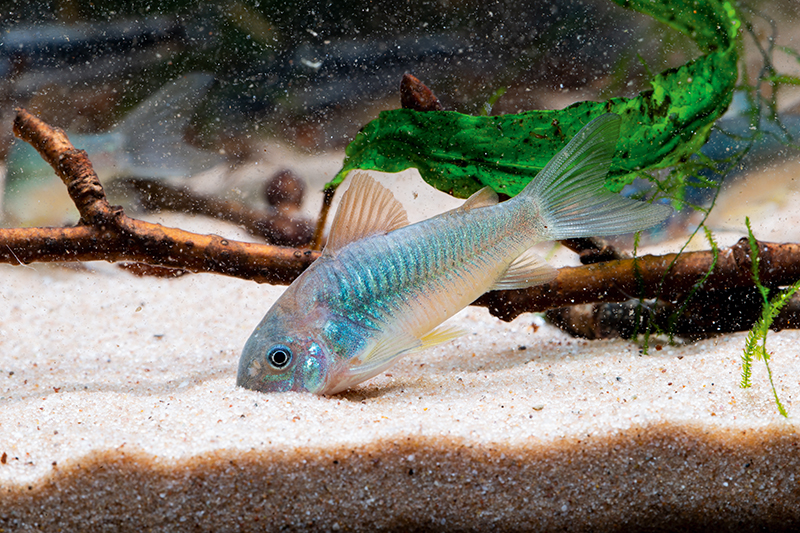 4. Corydoradinae catfish are happy over any substrate

This one is especially persistent but totally untrue. In nature, Corydoradinae catfishes are filter feeders, which is to say that they will take up mouthfuls of substrate, filter any food particles they find contained within it, and eject the unwanted substrate out through the base of their gills. They cannot do this with any substrate other than sand — or in some cases in nature with fine silt.

Many species in the wild will migrate to and from different areas during the course of a year. This pilgrimage is usually food based, as
it is with many animals. On their journeys, a number of them will invariably travel through areas where there is gravel beneath them, but unlike aquarium gravel this will not be of a uniform size and these gravelly areas will be intersected with sandy areas, such as in the margins.

The main problem with gravel in the aquarium is that food particles fall between the grains of gravel and out of reach, where they can and will rot down and pollute the water. At the very least this can cause an increase of nitrate (NO3), and can even cause a spike in nitrite (NO2). A sudden surge of nitrite is often the cause of the condition in Corydoras known as ‘red blotch’. This is a fast-acting physical condition which, if not treated at the first signs, is fatal.

Keeping Corydoradinae catfishes on plain glass-bottom tanks, while often touted as being hygienic and sterile, is unnatural and can have an adverse effect on the barbels and external mouth parts. The surface
of glass is surprisingly abrasive, especially when you are only a few centimetres long. The problem is amplified where glass is not kept clean and free from the natural bacterial slime (biofilm) that develops, and constant abrasion
will often lead to tenderising of the mouth and barbel tissue, in turn causing a loss of barbels. At its worst, mouth fungus can develop and is especially difficult to eradicate. 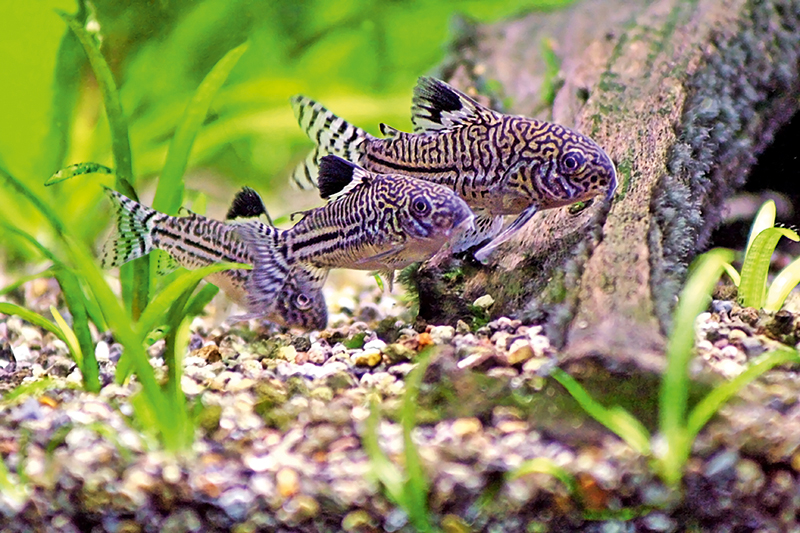 This is not strictly true. What many fishkeepers (and especially new ones) do not realise is that fish know who they are — they have a sense of self identity, all species have their own idiosyncrasies, and are recognised by their own kind.

Added to this is the fact that there are possibly twelve distinct lineages, each of which have different habits and habitat requirements. Other than the species found in lineage 1 (Corydoras) and some of lineage 3 (Scleromystax) a collection should have at least six or eight specimens of the same species.

In aquaria, the males of lineage 1 and 3 species are territorial and are best kept in pairs, but with plenty of natural cover for females to retreat into. In the wild these species will be seen in larger groups, but such a setting allows females the space needed to evade a dominant male, or sometimes even an aggressive female. 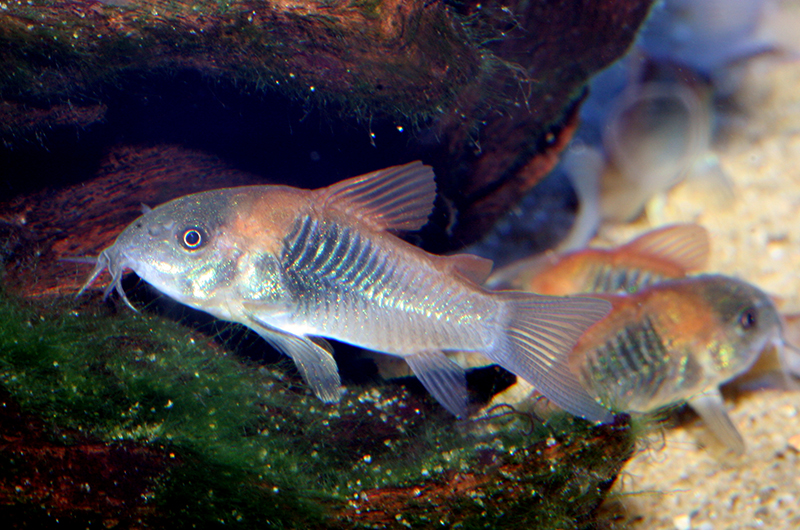 One pernicious myth concerns the identity of a species — Corydoras venezuelanus (Ihering, 1911). In the taxonomy world, this species is classed as a synonym of the common Bronze catfish, C. aeneus (Gill, 1858).

However, this doesn’t automatically invalidate the species, nor is it the final word on whether or not the species a true one. Instead, it means that although many people in the hobby who have kept and bred both of these catfish can recognise them as distinct species, science has yet to do so.

With the same species in mind there is a common misnomer that the ‘Black Corydoras’ is a variety of C. venezuelanus (and is often marked up in stores as such),
but is most definitely not. The problem here is with the aquarium trade itself perpetuating the misnomer.

The first ‘Black’ Corydoras were produced in Germany in the early 1990’s by Hartmut Eberhardt, who was breeding C. schultzei. Among the thousands of young he produced, some black juveniles appeared, and these were subsequently grown on and line bred to produce and fix the black strain. When young, the fry of these black fish look almost identical to the young of C. venezuelanus, in that the both display reddish dorsal and adipose fins.
The difference at this age is that C. venezuelanus has grey pectoral, ventral, anal and caudal fins. There is a regional form of C. venezuelanus which is very dark, but it is not black and has red dorsal and adipose fins — this form has never been imported into the hobby. 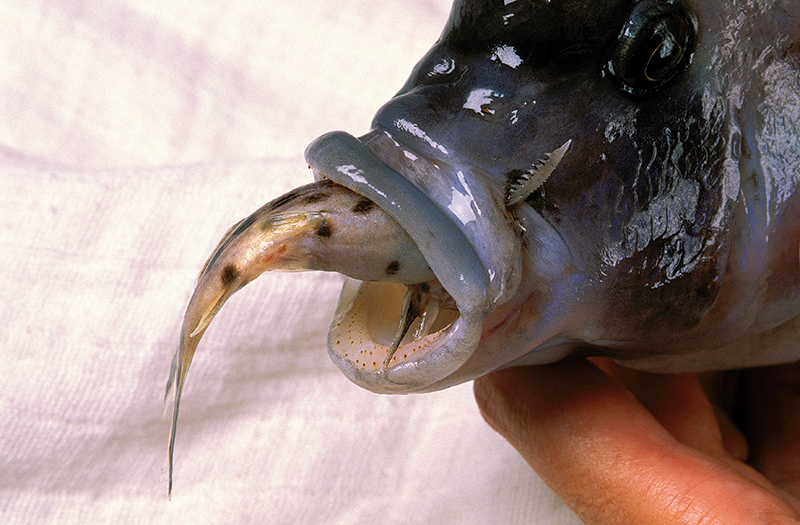 I’ve read that Corydoras have no natural defences against predation, which is a crazy statement. Their first line of defence — and many folks who have handled these little fish will attest to this — are the needle-sharp dorsal and pectoral fin spines. When threatened, a Corydoras can lock these spines into position (looking something like a caltrop) making it a prickly and unswallowable challenge for any predator — just like the Synodontis catfish pictured right.

Combined with the ability of many species to release a poisonous substance from glands behind a bone called the cleithrum, near the base of the pectoral fins, many Corydoradinae are somewhat well protected. Those species that lack (or have substantially reduced) poison glands still have a bacterial coating on their fin spines which can also cause pain, as well as being a gateway to infection.

On the same subject, it’s also incorrect that only Corydoradinae species with yellow or orange fin spines are venomous. There’s currently research into the poison glands of these catfish taking place in the USA that will put much of this to bed, but I believe that there are some lineages where poison glands are not present at all. 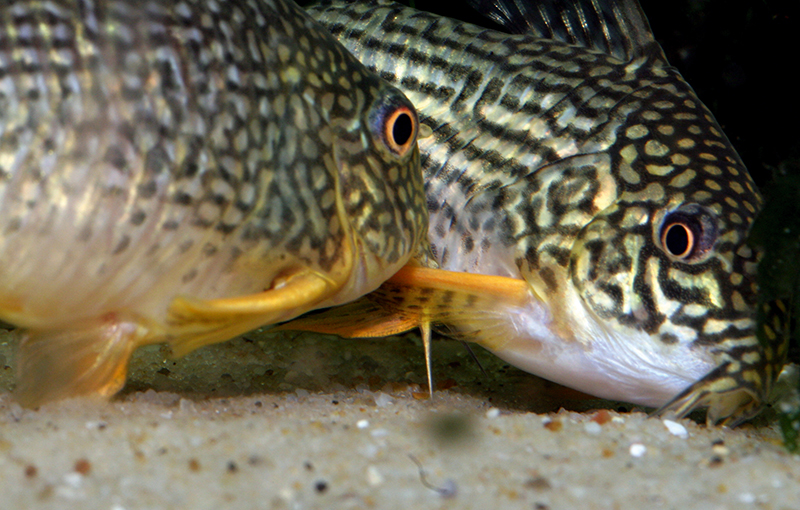 Sterbai in a spawning embrace

8. The myth of oral reproduction

Lastly, there’s a persistent belief that a female Corydoradinae will take the male’s sperm into her mouth and ingest it. The theory goes that she then passes it out through her vent and into a pouch made from her cupped ventral fins, which is where her eggs will be released during the mating process. In my opinion, this is doubtful.

I have read a research paper describing the methods used in the experiment, which included the use of a dye the track the flow through the female, but there were only sketches and no actual photographs of the process, which would have been more conclusive evidence than a simple hand drawing.

There are multiple biological hazards and obstacles in the way of such a passage for the male’s sperm and one obvious barrier is the fact that when in the mating embrace. the female invariably has her barbels clamped by the male. This would most likely restrict her breathing and ability to take in the male’s sperm.

In reality there are many possible hypotheses as to how Corydoras eggs become fertilised. Like many I have my own theories, based on many years of observing, photographing and filming these fascinating little catfishes breeding.