The Danger Of Cyanide Cyanide is harmful to the fish and the reefs where it’s used and almost impossible to detect. Tristan Lougher explores an undesirable and usually illegal practice.

Cyanide, or CN-, is a compound containing a molecule consisting of a carbon and nitrogen ion. Common examples are sodium cyanide and potassium cyanide; the latter infamous for its use as deadly suicide pills. Doses of as little as 1 milligram per kilogram of bodyweight can be lethal in humans.

From the perspective of catching fish, it’s easily administered and fast acting, and works by inhibiting an enzyme in the body that facilitates oxygen uptake. Non-lethal doses can lead to temporary paralysis and it is this property that has seen it embraced by fishermen seeking to increase their catch rates.

How and why is it used in fishing?

Cyanide is easily obtained in countries such as Indonesia and the Philippines due to its widespread use in the mining industry. Sodium cyanide (NaCN) is often the preferred form as it’s easily acquired and cheap to make, with a 500 ml solution costing around 30p.

Fishermen snorkel, free-dive or use hookah type breathing apparatus to get down to the reef floor, locate suitable fish then squirt the cyanide solution in their proximity.

It is difficult to administer a consistent dose to each fish, and results can vary between instant paralysis, slow incapacitation and death.

In the domestic setting, cyanide poisoning is chiefly associated with sudden, inexplicable deaths of an otherwise healthy looking and prized aquarium fish. The effect of cyanide on the bodies of fish is much the same as it is for humans; it can lead to blindness and inexplicable deaths of apparently vigorous fish, but onset is not always immediate.

Most of the time early symptoms may manifest themselves within a period of around six weeks — long enough for the aquarist to question their own husbandry rather than some unseen factor. Symptoms include lethargy, reclusiveness, going off food and an elevated breathing rate, all of which are easily attributed to other common diseases.

The problem is exacerbated by the fact that cyanide will kill coral larvae and prevent recruitment of the new generation of coral species on affected reefs.

A further impact occurs when paralysed fish need to be removed from crevices and holes, when the fishermen break open the substrate — usually living coral or base rock, which is home to diverse organisms. Such collateral damage is similar in nature to other illegal destructive fishing techniques such as bottom trawling over reefs and dynamite fishing.

There’s also a human cost; the collectors employing such dangerous techniques may find themselves under considerable pressure to use cyanide if their entire income is derived from the number of fish that they catch. Pressure may come from people further up the supply chain or simply from the fact that other collectors are using cyanide and therefore have an advantage.

These fishermen have little choice in who they can sell their fish to and in using cyanide they are handling deadly poisons with little or no protective equipment on a daily basis. 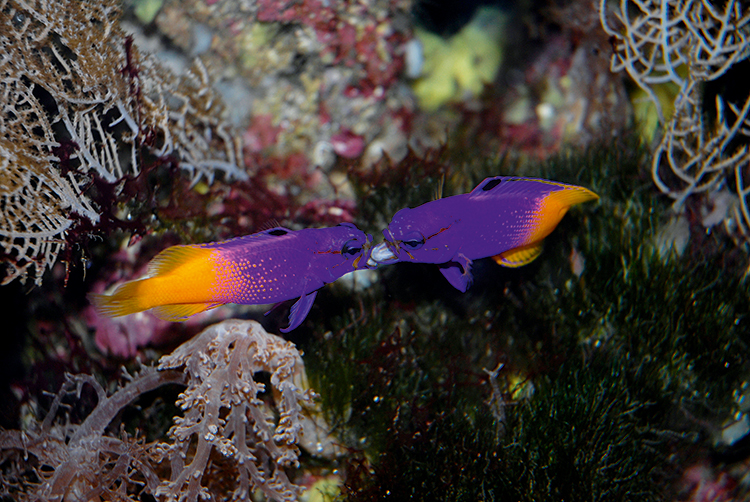 Royal gramma are a safe bet for cyanide free fish.

Use of cyanide is not just an issue in the collection of aquarium fish. In fact, only a small percentage (in terms of biomass if not numbers) of the fish that are caught for the hobby are stunned with cyanide. There is a huge market in certain parts of the world for live food fish such as groupers that can be caught with the same technique.

Here fishermen are paid per kilo rather than per fish and the earning potential is much greater than for traditional fishing for non-live food fish.  Where decent profits are available in illegal enterprises it is perhaps no surprise that organised crime becomes involved, and the officials tasked with policing such murky endeavours can be paid to turn a blind eye to proceedings. 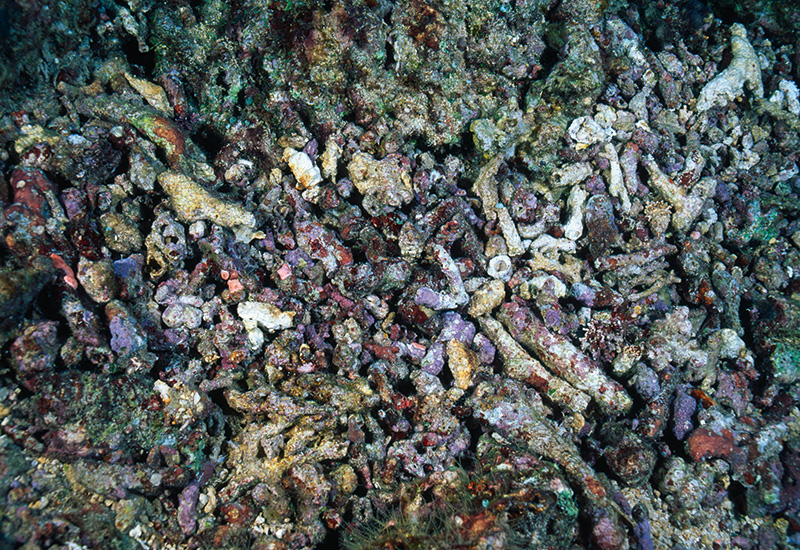 Coral damaged by cyanide use.

Prevalence of cyanide in the aquarium trade

Determining the actual percentage of aquarium fish that have been caught using cyanide-based fishing methods is very difficult. Much of the information out there is based on rather old data. The main problem with fish that have been cyanide caught is that it is virtually impossible to tell whether they have been exposed to the poison; if you observe a cyanide-caught fish next to one that has been caught using a net you would struggle to tell the difference. Indeed, as cyanide fishing is relatively ‘hands-off’ you might even find that a cyanide-caught fish looks slightly better than its net-caught equivalent.

There was some hope that testing fish for excreted thiocyanate would provide a smoking gun — thiocyanate is the result of metabolised cyanides that are lost from the body in the copious amounts of urine produced by marine fish. People that smoke tobacco have similar compounds in their urine.

One study testing for thiocyanate presence in marine fish caused widespread alarm and raised the issue of cyanide fishing to the eye of the mainstream media; the alarming statistic that at least 50% of marine aquarium fish collected in the wild test positive for cyanide. It’s a damning figure, suggesting at least half of all marine aquarium fish are caught using this illegal and highly destructive technique.

Fortunately, the reality is likely to be somewhat different. Another research group spent over three years trying to reproduce the data in the first study and couldn’t do it.

This can happen in science and is not too unusual, but it should come as little surprise that the technique for detecting thiocyanate in the original trial has not been utilised in real world scenarios.

However, the facts and figures it published have been, and still are, widely used in articles decrying the global aquarium fish trade. Economical and reliable testing is important in understanding and combating modern use of cyanide in the live aquarium fish trade. Encouraging research is being carried out into the detection of thiocyanates in blood plasma rather than in aquarium water and this, together with random sampling of fish destined for the hobby, may well provide a solution in the near future.

How do I avoid exposed fish?

This is the million-dollar question and unfortunately it doesn’t have a straightforward answer for the reasons outlined above. However, there are ways that aquarists can shift the odds into their favour.

It is widely accepted that cyanide fish is most prevalent in Indonesia and the Philippines. Thus, if your choice of species is between a Royal gramma, Gramma loreto, and a False gramma, Pictichromis paccagnellae, then the Royal gramma is the safer choice because it will have been caught in the tropical Western Atlantic where cyanide is much less likely to be used, whereas the False gramma is frequently caught around Indonesia and the Philippines.

Safer regions include the Maldives and Sri Lanka, the Red Sea and Australia amongst others, and it is entirely possible to reduce risk by simply choosing fish species collected from such locations.

But in doing so you will be limiting the diversity of choice available to you, and it’s also not entirely fair to those fishermen in the Philippines and Indonesia who undertake responsible collection without cyanide use.

Provenance tells us much when it comes to determining the chances of a fish being caught with cyanide, and it is exactly this that has informed some of the larger importers and wholesalers active in the UK and Europe. For example, UK based suppliers Tropical Marine Centre pride themselves on the fact that all of their fish are net caught. How can they be sure? By reducing the length of the supply chain and building relationships with the people who actually catch the fish, then supporting them with infrastructure such as high-quality holding systems.

Giving fishermen a reason to take care of their natural resources by paying good prices for fish and helping them to secure a good income is how sustainable fisheries are created and maintained. It’s an incentive to keep the fishery healthy in the long term. 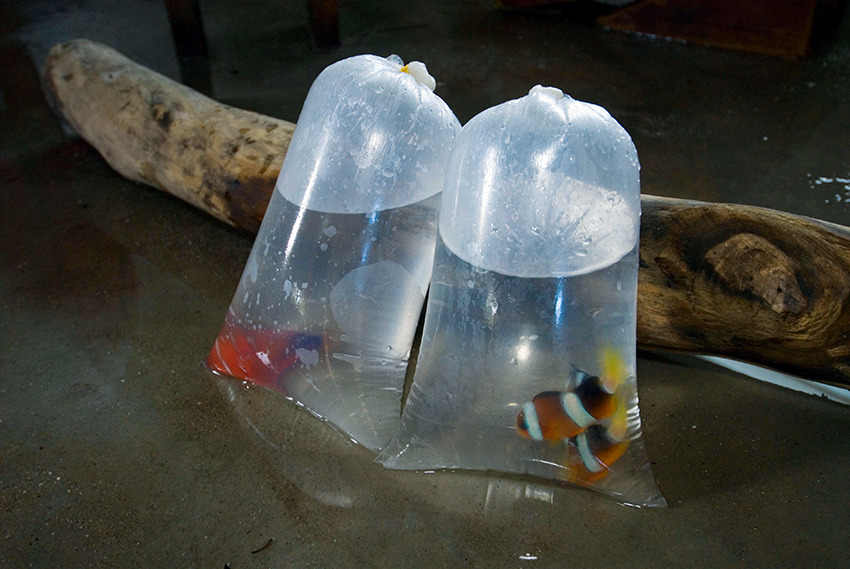 When I first began to research this article, I did so thinking that I already understood many of the issues surrounding the use of cyanide in aquarium fish collection.

What has surprised me is not the presence of new information, although advances in cyanide detection methods are being made, but rather the ability of the Internet to churn out misinformation for years; presenting outdated and potentially erroneous data again and again, particularly when the sole agenda appears to be to present the aquarium hobby in a bad light.

Cyanide fishing does occur, that much is certainly true, and yet it is not something that aquarists want to happen to their fish even if they are able to buy them more cheaply; saving a few pounds seems like false economy when the chances of survival are reduced so substantially.

It is up to us to demand happy, healthy fish and show that we will not tolerate practices that are harmful to the collectors, the fish and the reef.
It might mean that we have to pay more attention to the provenance of the fish that we buy but that’s not really too much of an ask when it comes to protecting the future of this wonderful hobby.