The African pygmy angel is usually well behaved in the reef tank. Dave Wolfenden explains more about a fish that is representing one huge breeding challenge.

A beautiful inhabitant of the Indian Ocean, Centropyge acanthops typically grows to just 8cm/3 1/2” and is arguably one of the best pygmy angelfish for  home aquaria. It is found around East Africa, to Madagascar and the Maldives, and among Acropora (staghorn coral) and the reef’s rubble zone up to 40 m/130’ deep.

Its head, dorsal and caudal fins sport a golden coloration, and the rest of the body is a deep purple-blue. A prominent cheek spine inspires this little angel’s scientific name — ‘akantha’ being the Greek for thorn. But a prickly fish it is not...

When selecting for your aquarium, examine each one in your dealer’s tanks for obvious problems. Some pygmy angels react poorly to transportation and handling, so avoid those with split or haemorrhaged fins, scale damage or evidence of parasitic or bacterial disease.

The best fish should be active and alert, and any exhibiting laboured breathing should be avoided. Quarantine all new specimens and provide a few pieces of live rock to allow them to graze and settle in smoothly.

Most Centropyge species seem sensitive to copper, so use alternatives to copper-based antiparasitic medications.

Wild diet consists of tubeworms, sponges and other invertebrates as well as algae. In captivity, they have pretty catholic tastes, however, and once settled in are fairly easy to cater for, accepting a very wide variety of foods — and variety really is the key word!

They graze and forage a lot on the aquarium’s rockwork, so tend to fare best in established tanks of at least 200 l/44 gal with plenty of live rock to replicate the reef’s rubble zone. Arranging rock into caves will give the angel plenty of valuable cover. In fact, the more it has the more the fish should be assured and visible in the aquarium.

This is fairly easy going with other distinct species, but specimens can, in smaller aquariums, become aggressive towards other pygmy angels, especially their own species and other species that look similar.

For example, attempting to keep a C. aurantonotus with one is dodgy due to the Flameback’s similarity to the African. Add C. acanthops quite late on, once the more timid species are established in their own territory first.

Due to their size it is not recommended that C. acanthops should share a tank with aggressive or predatory ‘usual suspects’ which can eye up a meal. These include triggers, lionfish, groupers, anglers, larger puffers and morays. African pygmies can be feisty, but not that feisty!

Are they invertebrate safe? Well, mostly! It can always be risky adding any Centropyge to the reef aquarium and no one can absolutely guarantee that a specimen of C. acanthops won’t attack any of your invertebrates.

The most damage they should inflict is when feeding on sponges and tubeworms from the aquarium’s rock. Every so often, however, a rogue will acquire a taste for sessile invertebrates such as corals, nipping at the polyps. Removing such an individual can be virtually impossible without a complete stripdown of the tank — so be warned!

Pygmy angels are the focus of some concerted captive breeding efforts. Many hobbyists have reported spawning in the aquarium, but completely closing the life cycle is a different story!

Pygmy angels are all believed to be protogynous — female first — hermaphrodites.  As they mature, they develop into females and become part of a harem of several, each one having only one male. Should he die, one female will undergo a sex change to replace him.

Simply keeping two or more specimens as adults can be risky, however, as individuals may be aggressive towards conspecifics, especially in smaller environments. Obtaining two small individuals and allowing them to pair naturally may be best.

Breeding successes with various Centropyge angels have revealed that simulating ‘springtime’ with raised temperatures and extended daylength elicits courtship and spawning, which reportedly occurs at sunset for C. acanthops. They do so in mid-water and the gametes are released in a characteristic ‘spawning rise’ behaviour — so a deep aquarium will help as the angels are unable to perform in shallow water. Tank volume can be small, however, and spawning has taken place in 300 l/66 gal.

The minute eggs are buoyant, due to an oil droplet in each, so collection is potentially easy. Many reef tanks, with strong flow rates and highly efficient filtration and skimming, make collection difficult, so dedicated tanks are favoured.

The eggs hatch in less than 24 hours, and the larvae initially utilise a yolk sac before beginning to feed, and this presents the greatest challenge for captive culture. Once the sacs are used up the fish will need to be fed tiny prey such as copepods which can be complicated to culture.

This species is going to be a challenge to breed – but it’s only a matter of time!

Centropyge acanthops is less likely to nip at prized sessile invertebrates such as corals if it gets enough food, so regular meals, coupled with well-seeded live rock to forage on, should help.

Several other pygmies could make good choices for your reef aquarium... 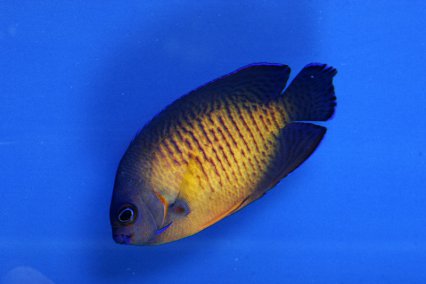 Coral beauty: C. bispinosa is an Indo-Pacific species and is highly variable in coloration depending on origin, which can be confusing. Some are almost completely blue, but the most common form sees the blue augmented with orange stripes. 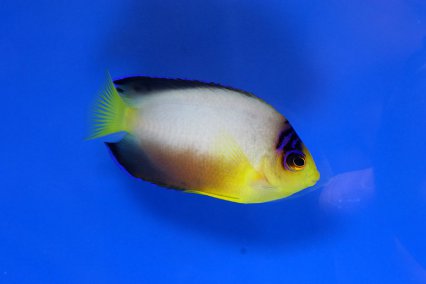 Multicolor angel: C. multicolor is one of the most striking pygmy angels. With a mish-mash of white, black, blue and yellow, this Pacific species has obvious appeal. Being a deepwater species specimens are extremely expensive but hardy and it fares well if provided with enough rocky crevices. It may find sessile invertebrates a little too tempting, however!

Individuals can be aggressive towards others of their own kind. 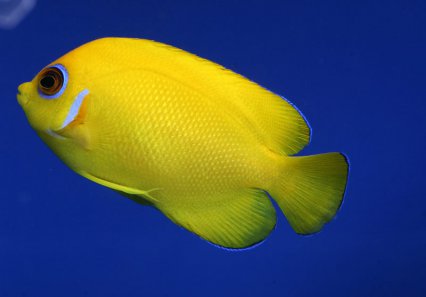 Lemonpeel angel: C. flavissima comes from the Indo-Pacific. It grows larger than many other pygmies, reaching 14cm/5.5”.

Overall coloration is bright yellow with an electric blue rim around the eye and blue edging on the fins. Juveniles have a bright blue-rimmed black eyespot or ocellus.

They fare best if provided with plenty of crevices and hiding spaces, and unless having plenty of room are generally intolerant of other Lemonpeels.

This particular species is mimicked by juveniles of the tang Acanthurus pyroferus to exploit food resources defended by the damselfish Plectroglyphidodon lacrymatus.