The 10 fish most often returned to the shop No, we're not just talking big fish here - but some of the smaller, more common species many of us have swimming around in our tanks! Jeremy Gay highlights the fish aquatic retailers are most often asked to take back.

We're all now only too aware how many tankbusters cause problems to shops and public aquariums, but a recent shoptour spurred me to ask the question of which of the smaller, even more readily available stuff is brought back to the aquatic shops the most.

I asked several stores which fish they were asked to take back on a regular basis, and the same species cropped up again and again.

Below are some of the usual suspects: 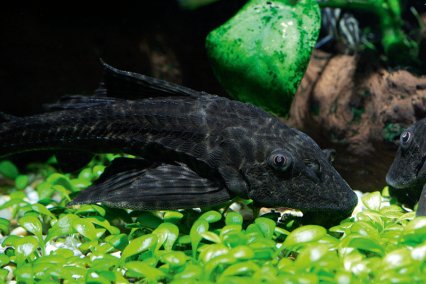 It's not their fault by any means, but the poor old Common plec is one of the most abandoned species in our hobby, firstly because of its seemingly unstoppable growth and secondly because it poos so much.

I don't think its the fault of the shops necessarily as everyone knows they grow to over a foot long, but the sad truth of it is they're just so hardy that few people kill them, and living for two decades in many circumstances they simply outlive people's passion for hobby, and their drive to maintain a large tank and change water week in week out over a 20-year period. 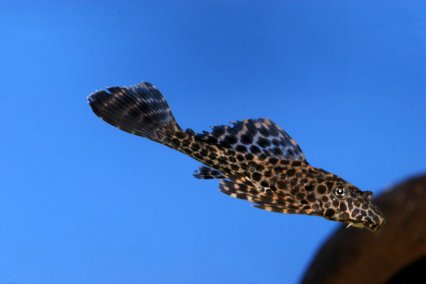 As for the Common plec, only these things grow even bigger and poo even more. Plus that very rigid, armoured body and those huge pectoral fins mean that through no fault of the fish, when it tries to cruise around an average sized aquarium it gets snarled up in plant stems and stirs everything up.

As fish go I do think it's a handsome one however, and I still maintain that if the gibbiceps had only recently been discovered, adults would be carrying price tags in the hundreds and not being given back to stores for free in their droves.

And as for the Common plec, Sailfin plecs do make suitable tank mates for all sorts of cichlids and oddballs if the tank is large enough, only global trends for smaller and smaller tanks, and the recession, means there just aren't so many big tank, big fish communities out there any more. 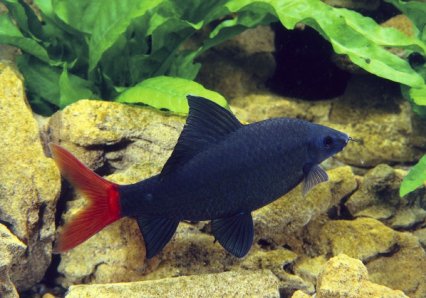 We're not talking Black tip reef here, instead we're talking Ruby sharks and Red tail black sharks. Why do so many come back? In short, aggression, as these stunning fish are known for getting more and more narked as they get older and larger.

The sharks' story is simply one of being misunderstood however, as place a single specimen into a 120cm/48" plus, heavily decorated tank with plenty of food to browse and no similar fish that will compete with it and your shark will be very much more chilled out. But place it into an overcrowded, small, bare tank with nowhere to call its own and lots of similarly shaped, similarly coloured, sharky type fish and they will soon become intolerable both for other fish in the tank and for you watching.

The worst mix is to put them with their own kind. So how do shops get away with it? By overcrowding them as you would with Malawi cichlids, though this is less than ideal and most of the sharks I see on sale have split fins when kept with their own kind, and in high number. 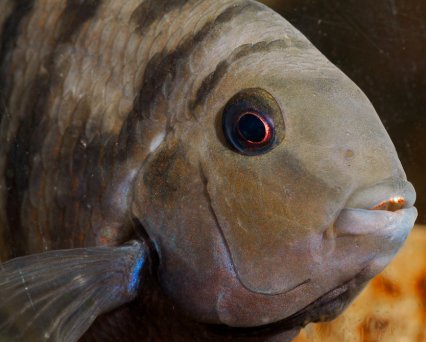 Another favourite of mine! The Convict's only crime is its success at reproducing, and the attitude that comes with it when protecting its own fry. Keep a lone male or female in a community of medium to large, robust fish and you may never have a problem.

I'll even go so far as to say that a mature female can be very beautiful, but put a male and female together, of an inch in length upwards, and that community tank will quickly turn into World War III.

So buy two Convicts and they can quickly turn into hundreds, thousands even within a short term as they will keep spawning and raising fry if you take the old fry off them. Where do you take them? Your local aquatic store of course, only the 24 Convicts they had in stock turned out to be 12 pairs and you are now one of 12 of their customers who are wanting to bring several hundred fry back on a monthly basis.

One store I spoke to refused to order in or take back any Convicts in the future, such was the problem in their local area. And they'd stopped selling Sailfin plecs too. 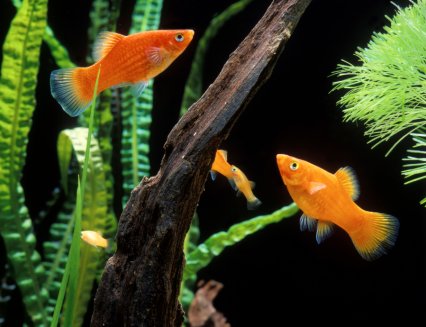 Guppies, platies, mollies and swordtails, and now endlers, are very much new fishkeeper fodder, and when you visit a store to see that they'll typically have 12 tanks of livebearers to just one tank of Neon tetras, that's a lot of livebearers being sold each week.

Of the ones that survive being dunked into high nitrite levels, or aren't carrying a disease, they will inevitably breed and inundate the average 60cm/24" starter tank with just too many fish.

I don't think that baby livebearers are a problem like, say adult Common plecs are, and there is a ready market for cheap fry, but just don't expect all shops to take them, or to offer any money for taking them off your hands. 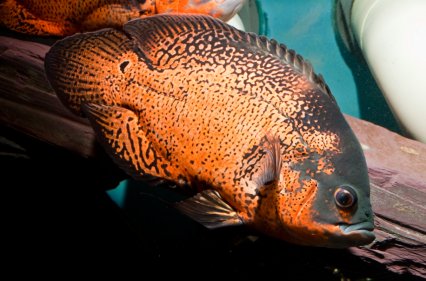 An adult Oscar is a handsome fish indeed and they have a certain grace and character about them, but thousands come back each year, probably because of the large fish, long-lived, in need of large tanks, poo-a-lot scenario, as with the Common and Sailfin plecs — and the three are often kept together, so if a tank gets shut down the shop will receive both the Oscar and the plec.

Mate them up is one thing to do, as a mated pair, or better still a "breeding pair" of large adult Oscars in good nick will have a certain amount of re-sale appeal, but being predators, most attack each other as soon as they are mixed and few staff have the time or spare tanks to sit it out and pair up fish.

The adult Oscar can be a blessing in one way however, as to import a 10-12"/25-30cm fish from abroad would end in a selling price in the hundreds of pounds. At least by importing them small, and being returned to shop when larger, those who can home them long term get a lot of fish for the money. 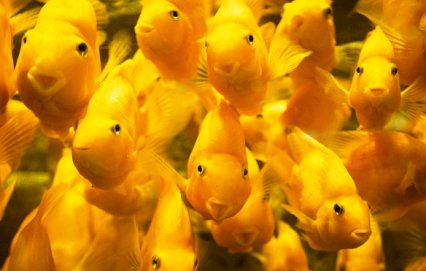 The goldfish of the tropical fish world, the stores told me they get a lot of Parrot cichlids back too. Parrots grow surprisingly large (25cm/10" or more in some cases), will eat small fish like Neons and can vary in temperament, but because of their hardiness they are hard to kill so re-homed ones do the rounds.

Many lay batch after batch of sterile eggs too, and the novelty of a cichlid spawning can quickly wear off. 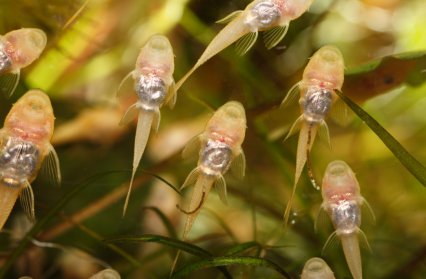 One of the few positives to come out of rehoming fish is when you receive a large amount of fish that you actually want to get in and re-sell. This is the case with Bristlenose catfish, which are surprisingly easy to breed, with the fry seemingly needing no special care from their owners whatsoever.

So being offered 50-100 4cm bristlenose by one of their customers can be a blessing, as it saves the store having to import them in from the Czech republic and a deal can usually be done where the owner is paid in fish food. 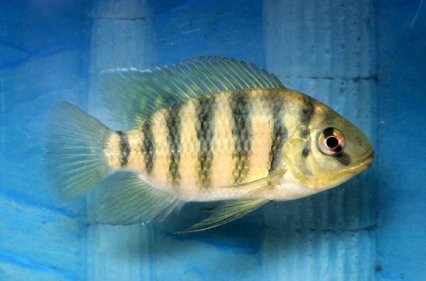 There are two main sorts of Tilapia, mouth brooders like Oreochromis and substrate spawners like the genus Tilapia proper. Both are very hardy, and very prolific, which they need to be as they share their natural waters with some of the scariest freshwater predators on earth. Put them in a predator-free aquarium though and two will quickly become many hundreds, and adult Tilapia aren't everyone cup of tea, or particularly easy to re-sell.

Tilapia mariae is a classic case of this. If you are a livestock manager and budding cichlid collector, a batch of small, striped Tilapia mariae can add a touch of the unusual to your cichlid stock offering, yet little do you know that by "infecting" your store with these little fish, you will have unwanted stocks of their fry for ever more. 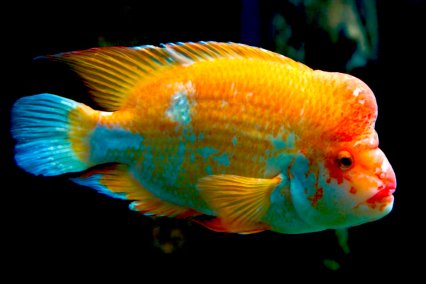 As with the Tilapia, a Midas cichlid added to a fish order may seem like a good idea, excet that breeding isn't so much of a problem this time — it's aggression! From a size of about 5cm/2" Midas cichlids start to colour up and sex out, and the horrible scenario happens all too often in shop tanks where one dominant fish terrorises all the others, who go black and try desperately not to look like the species they actually are. So eventually six Midas cichlids need six tanks.

One gets sold, does the same thing in the hobbyist's tank and becomes pretty much unhousable, before being given back to the fish store who have to sentence it to a life of solitary confinement, where its one pleasure in life is biting the person who cleans its tank!

We want to hear from you