Don't be taken in by the striking colours of nudibranchs. For many reasons the hobby isn't ready for them yet, says Nathan Hill.

Part nudist, part foot, part stomach. That’s what it is to be a nudibranch. Some of these casually termed sea slugs are brightly coloured, some drab, some camouflaged, some brightly so — but all are incredibly hard to keep.

Nudibranch literally means naked gills. The feathery growths sprouting from their back are just that. These will be paired, or in the case of aeolid nudibranchs, numerous and tubular.

In an aeolid, like the one above, these tubes are known as cerata, and come in many forms; from spindle shaped to heavily branched. Some aeolids will even fill their cerata with the zooxanthellae of their prey, using the photosynthetic algae in the same way as their former victim had to produce sugars for themselves under intense sunlight. 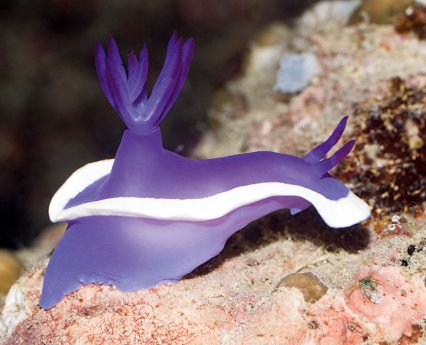 All of them belong to the class Gastropoda, a grouping that includes the humble snail, but the nudibranchs gave up their shell many millions of years ago, instead relying on stings, toxicity or foul taste to protect them.

Gastropod literally means stomach foot and never was a description more apt. There’s the foot, there’s the stomach, but not much more. ‘Sea slug’ simply refers to any gastropod without a shell that happens to live in the sea and the variations can be huge.

Unless camouflaged, nudibranchs are unmissable, and even the camouflage is garish. Their bright coloration serves as a warning to would-be predators of elaborate defence mechanisms.

Some simply taste awful, like the elegant Spanish dancer, a highly motile, free-swimming species. Some go so far as to generate their own sulphuric acid. Yet others will store up the painful nematocysts — the stinging cells of their prey — in their own bodies, making a painful arsenal of weaponry ready to fend off the curious and hungry. One species even makes a living tracking down and consuming the famed colonial hydrozoan Portuguese Man-o’-War feared for its potentially lethal sting.

The colours should also act as a warning. They can sting and bite you, especially in the wallet. You’ll be attracted, you’ll fork out good money and you’ll regret it. 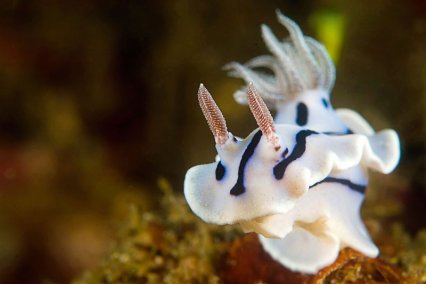 Nudibranchs are bad news for both retailer and fishkeeper. It’s bad for the retailer, as if he or she is stocking them it speaks volumes about their ethics. It’s also bad for the aquarist, as after much fruitless searching and struggling you’ll find this animal way beyond your means. Nudibranchs make poor tank inhabitants.

In part this is down to a very specific dietary requirement, varying from species to species. Some are cannibals, feasting on other nudibranchs. Some will prey on fish.

The vast majority have evolved over millions of years to feed on one particular variety of sponge, coral, anemone or hydroid. Some will simply sit and excrete enzymes, sucking in the resultant digested slurry of their unfortunate victim. 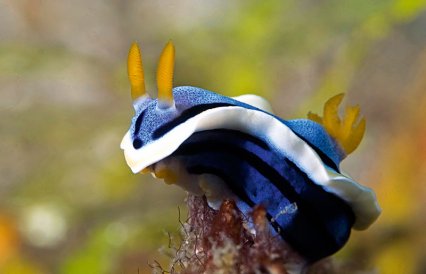 Assuming you’re lucky enough to find out what your particular species feeds on, I wish you the best of luck in tracking down a ready source. It’s not uncommon for the food species to be far more delicate than even the most expert reefkeeper could accommodate, let alone undertake as a project.

Beware the store that informs you that these animals can be ‘weaned’ on to other foods. These cannot undo millions of years of fine tuning overnight.

However, there is a notable exception: Berghia verrucicornis, which is marketed heavily as the Aiptasia-eating slug. This species does exactly what it says on the tin, munching on those pesky anemones with gusto. Yet all good things come to an end and, on gorging, clearing out the tank and breeding, these animals will then simply starve to death.

I tend to see most animals as an end in themselves, rather than just a means to an end. Why risk the starvation of these hapless helpers when Peppermint shrimps will do just as good a job — and without the unfortunate end result?

Berghia come with other problems, too. They are small, even by nudibranch standards. Pop them into a heavily stocked reef tank and a hungry bristleworm or inquisitive crab may have ideas about their future. Being aeolids, Berghia can actually shed their cerata in the same way that certain lizards may discard their tails when threatened. However, for the ravenous crab with a pincer full of nudibranch that makes little difference.

For most of us an experience with a nudibranch will be accidental, perhaps as a by-catch brought in with a piece of live rock, or hiding under a purchased coral, to emerge, bemused and hungry once safely back among familiarity.

Such cases are particularly unfortunate and fishkeepers in such situations should do all they can to find at least some constructive information about these hapless stowaways.

It’s unlikely, but if you can find what they eat, and a source for it, then you could at least make the effort for them. There are many nudibranch forums and scores of websites dedicated to them, so you may get lucky.

What’s my stance on these creatures? Don’t bother keeping them. The nudibranch is a stunning and highly specialised life form that belongs in the oceans. Perhaps one day, with advances in technology and food production techniques, we may be able to venture into nudibranch keeping, but for now they represent one of the great taboos of the industry.

Slugs of the high seas

Not all nudibranchs are true to their usual ‘slug’ behaviour. As well as throwing off the shackles of a shell, some species have even done away with a benthic, ground-dwelling existence, taking to the open waters in their search for food. 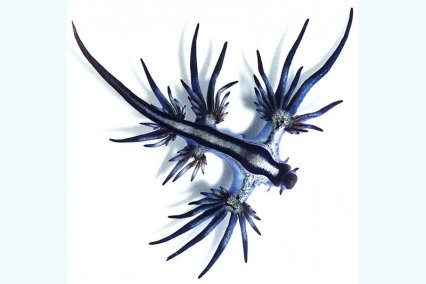 Possibly the most extreme oceangoer is Glaucus atlanticus, otherwise known as the Blue sea slug or Sea swallow.

This species spends its life belly side up at the surface, ingesting bubbles of atmospheric air to maintain buoyancy. Although there’s debate as to whether it actually swims, this creature happily drifts across oceans, using the same countershade strategy as many pelagic fishes; light side up, dark side down.

Glaucus is a predatory carnivore, feasting on animals that most other creatures would do well to avoid. High on the menu is the deadly Portuguese Man-o’-War that also drifts the oceans, but trails tentacles and is feared for its powerful stings.

Not only does Glaucus have immunity from these stings, it positively relishes them, absorbing the dangerous cells — the nematocysts.

It stores them inside its own body, on the ends of the finger-like cerata that jut out either side of its body. In doing so it often becomes more concentrated and powerful than the Man-o’-War’s sting.

Nudibranchs can be just as hazardous dead as alive. Always treat them with respect if you find one in your tank and never touch one without gloves and/or tongs. Even a dead slug can give a powerful sting. 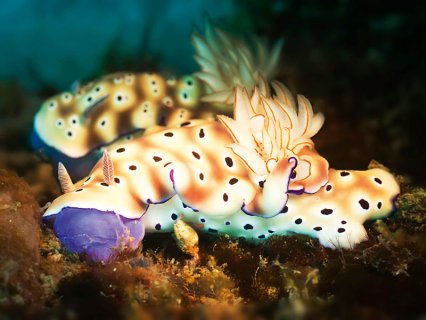 Quick Q and A

Nudibranchs, like their gastropod ilk, only have the most rudimentary eyesight. At best they can make out the difference between light and dark, which regulates their rhythm between day and night.

They have no colour perception and their bright markings play no role in identifying mates or rivals. Instead, they rely on smells and tastes, detected by their rhinophores and cephalic tentacles respectively.

How do you sex nudibranchs?

Simply! All nudibranchs are simultaneous hermaphrodites, meaning they have both male and female reproductive organs. Every nudibranch carries eggs and sperm, and it’s down to finding another nudibranch of the same species before breeding can start.

Most are rather small, with most adults seemingly under 10cm/4” in total length. However, there are some absolute brutes out there. The Spanish dancer, the famous swimming nudibranch, has been reported at over 50cm/20”. The sad fact remains, however, that if you find a nudibranch that has somehow sneaked into your aquaria then it will be unlikely to see out the month before starvation takes its toll — let alone reach adult size.

Hell, yes! Berghia nudibranch are ravenous predators in an aquarium, but otherwise reef friendly. You’ll likely not see them on the job until they’re almost out of food, as they prefer to do their feeding at night and are shy of aquarium lighting.

If you see them looking during the day it’s a pretty clear indication that the little fellows are near starving. They can get into all the nooks and crannies you’ll not be able to physically reach, as well as hunt down those Aiptasia that you can’t even see.

Try to bear in mind that young Berghia are surprisingly delicate and will struggle to acclimatise if purchased too small. As a guideline, you want to be looking at buying them at no less than 12mm/0.5” if you want successful introductions.