Bad water is the biggest killer of fish in the aquarium and New Tank Syndrome (NTS) is one of the most common causes. Jeremy Gay describes how to recognise and fight it.

New Tank Syndrome occurs mostly in newly set up aquariums, but you could cause something similar in a mature aquarium and filter stripped down and cleaned too thoroughly.

Add fish before the bacteria are in place to deal with the waste and toxic ammonia and nitrite will build up. Fish cannot deal with high levels of ammonia or nitrite and become ill or even die, leaving new fishkeepers scratching their heads. Tell an expert about what happened, and how quickly, and he or she will most probably diagnose New Tank Syndrome.

Ammonia and nitrite cannot be detected simply by looking into a tank. They are clear and colourless, so must be detected with a test kit. The other way is when your fish let you know…

Typical symptoms can be fish refusing to feed, looking lethargic, hanging at the surface, rolling over in midwater or sudden unexplained deaths throughout a cross section of the species in your tank.

Severe poisoning can also manifest itself as bloody veins in the fins and reddened gill areas — something common among goldfish kept in unfiltered bowls.

Every fishkeeper should always have a test kit to hand and water should always be tested before and during keeping any fish. If they look under the weather the first thing you must do is test to establish NTS.

Any levels of ammonia and/or nitrite above 0.0ppm should be considered dangerous and, if present, it must be assumed that there is not enough bacteria compared with the fish.

Levels above 1.0ppm of ammonia or nitrite could kill fish, or make hardy fish ill. If your results are equal to this, or over, take immediate action. Firstly, make sure your filter is running. It may have clogged and stopped — or maybe you didn’t plug it back in after cleaning? Obvious, but it happens all the time.

Then don’t feed the fish for the duration of the problem. A few days without food is much better than trying to feed lethargic fish and making the problem worse.

If the fish are looking worse for wear, prepare for a water change. Always make sure that you have enough water conditioner and the necessary equipment to hand, like a syphon and bucket. If you use water of the same hardness and temperature, and dechlorinate it properly, there is no reason why you can’t change up to 90% of water in an emergency.

But if you change a lot, and it is cooler by a few degrees or very different in chemistry, this could stress the fish and cause whitespot later on.

Lastly, add some filter bacteria. Choose one that consumes ammonia and nitrite and add it after you have dechlorinated the water.

With pollutants present, breathing will be laboured. Add an air stone to increase oxygen levels, which will also help your friendly aerobic bacteria to breathe. Aquarium tonic salt can be added to water to detoxify nitrite and aid the fish’s breathing. Use as directed on the packaging. 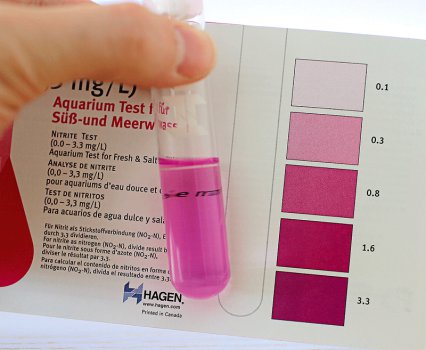 If pollutants are high and killing fish before your eyes, and if you have another mature aquarium, transfer the fish. Better still, run two filters in another aquarium so, if NTS ever occurs, you can move a mature filter over and it will consume the ammonia/nitrite naturally.

Practical Fishkeeping wants all fishkeepers to provide the best possible homes for their pets at all times. We want the fish to feel relaxed and comfortable and not  stressed by any pollutants. That’s why we believe the best way to mature an aquarium is to do it before fish are added — a process called fishless cycling.

This can be carried out with products readily available in aquatic shops. You need ammonia, nitrite and nitrate test kits, filter maturation fluid containing bacteria and an ammonia source like Waterlife Biomature. Add the filter bacteria and start dosing daily with ammonia. Test the water daily and record the results.

When the bacteria are present in sufficient number to break down the ammonia you are dosing, and the subsequent nitrite and converted into nitrate, it is cycled. If the nitrate has built up to 40ppm or more during fishless cycling, conduct a water change before adding fish, to bring it down.

NTS in a mature tank?

By definition this shouldn’t happen, but it does. If the fishkeeper makes a series of errors an effect similar to NTS can occur in mature tanks.  Avoid these three mistakes:

Cleaning the filter under the tap. This is a big no no, as chlorine and chloramine are effective at killing good and bad forms of bacteria. Wash your media under the tap and it will kill and wash them away.

Place the cleaned filter back into a tank with fish and there’s no bacteria to break down their waste. You are back to square one in terms of maturation and, if you have a fully stocked tank of fish, you are in big trouble.

Replacing all filter media at once. Again this can spell disaster as all good bacteria are removed in one go and replaced with new sterile media. Maximum filter flow may well be restored but it won’t help.

You may as well have no filter at all as there is nothing to break down waste, even if it does a good job of trapping waste mechanically. With fish in situ, a change of all media will cause you big problems.

A big clean. It is possible to be too thorough when cleaning your tank and removing too much beneficial bacteria. It doesn’t just reside in your filter, living as well on every surface in the tank — including gravel, décor and glass.

It is even present in the water, so, by removing all your gravel and doing a massive water change, huge amounts of bacteria can be lost and test kits may show some ammonia and nitrite days after a big clean out. This is why it is not recommended to strip  the tank down.