Nathan Hill identifies a masquerading predator that really is like no other hunter. Meet the master of camouflage.

Evolution is a wonderful thing, throwing up a diversity of life that evades even the mind of the most creative sci-fi author. Monocirrhus polyacanthus is as alien as anything that might turn up on Mars.

For fans of predatory fish, these South American leaf mimics pose a not inconsiderable challenge. They are tricky to feed, demand impeccable water and spend much time invisible among foliage. However, seeing them behaving naturally in an aquarium is a reward justifying all your work. What’s more, they sport brilliant goatee beards!

South American leaf fish belong to the tiny family Polycentridae. The genus Monocirrhus shares this family with its relative genus Polycentrus, typified by the species P. schomburgkii — but this latter fish fails to captivate on the same level, lacking the advanced camouflage of the former. 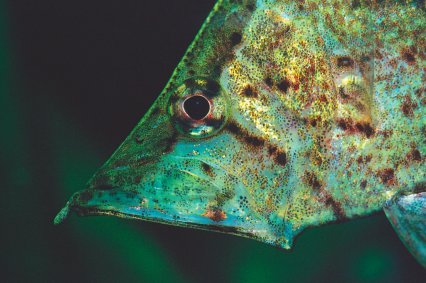 Both share massive protracted mouths and stalk in similar ways, but M. polyacanthus has the edge over its relative with a faster feeding speed and, with a strike time of only 0.2 seconds or less, it’s one of the world’s fastest eaters.

Most captivating of all is the camouflage and mimicry of Monocirrhus. There are many words to describe aspects of its procryptic behaviour, where it emulates the drifting of a dead leaf, and there’s argument about how such behaviour should be classified.

Rather than just resorting to colours typical of a camouflaged fish, M. polyacanthus goes much further. The fish has come not just to share colour with dead foliage, but to copy its shape, right down to the leaf tip – hence that characteristic 'beard'.

This theme has been adopted by other South Americans – notably Farlowella, the Twig catfish – but the leaf fish never gives the game away by resorting to the fishy movements of many other mimics.

Leaf fish evolution has even taken into account the most common failing of predators – the obvious shape of the eye. In this case its profile has been blurred with shaded lines running straight through. This is a focused predator.

Many myths surround this fish, especially where feeding is concerned. Opinions range over optimal conditions and some assumptions have lasted too long without question.

The leaf fish is often referred to as an obligate piscivore, feeding exclusively on fish, but this is an erroneous assumption. Studies on wild-caught specimens revealed a range of foods in the gut and even though fish feature highly by no means do they form the only diet.

Many M. polyacanthus have been caught at one particular region and their gut contents analysed, finding an average of 64% fish matter and 36% invertebrate. Of the latter much was of insects that weren’t always aquatic based, although many shrimps were also found.

These findings suggest they will happily take bugs dropping in the water — and suggest feeding alternatives for captive fish. Of the fish consumed, 75% of identifiable content were either tetra of the Hemigrammus genus or Nannostomus pencilfishes.

In these wild fish, average prey size was up to 35% of the hosts’ length, which is considerably less than of-touted folklore that these will readily eat fish more than half their own size.

Even feeding behaviour has evolved fascinating features. As well as its high-speed strike and associated oral structure, the fish have a remarkable way of ‘layering’ prey fish inside, curling their meal so that both head and tail are pointing back towards the mouth. This allows multiple fishes to be ‘stacked’ in order, allowing the leaf fish to stockpile prey should meals become scarce.

The mouth is cavernous but thin, extending out in front and comprising almost 60% of the length of the head.

M. polyacanthus exhibits chromatic (colour) changes when required. Altering from dark brown through to autumnal yellow, the fish can adapt for whatever conditions are required. 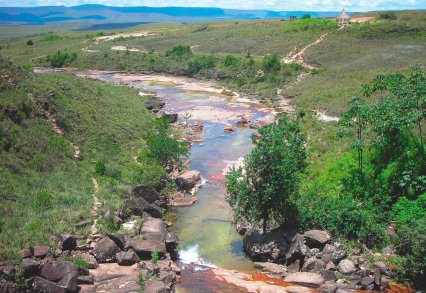 It’s common to find leaf fish among the leaves they have copied, although they seem almost indifferent to the model they have evolved to replicate. They tend to drift in solitary fashion, enjoying the concealment and prey advantages offered by dwelling among shoreside vegetation – often grasses and reeds.

When drifting it characteristically swims side on. The fish bends and sways but rarely moves upright, just as a floating leaf would not. Having mastered this form of swimming, the leaf illusion is complete.

Literature notes one of these fishes’ earliest collections, from 1920, when the task involved simply poisoning an entire stream and seeing what bobbed up. It was only by chance that the gasping behaviour of the leaf fish separated it from other leaf shapes drifting down the now dying waterway. 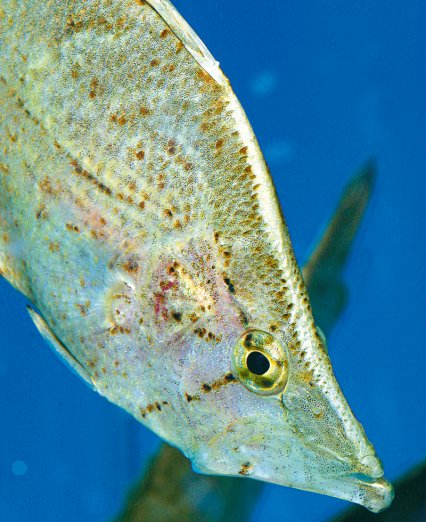 Can I keep this fish?

Leaf fish are demanding, not least over the issue of feeding. These are incredibly hard to wean from live foods and only recommended to the most dedicated aquarists experienced in shifting live feeders to dead foods.

Dead feeding is not unknown and some keepers report leaf fish even accepting dead fare from hand. An ample supply of river shrimp should be considered in the early stages, along with insects and even earthworms. It would be wise to gut load invertebrate foods first, feeding something nutritious that will transfer to the leaf fish.

Water parameters should be kept as close as feasible to wild conditions. Water temperature varies in the wild, but will be acceptable between 22-25°C/72-77°F and pH needs to be low, optimally between 5.0 and 6.0, if these fish are to be at their best.

There’s the associated issue of increased pathogen burden at higher pH values and these fish are not equipped to deal with opportunistic bacteria and fungi. Statistically it would seem that, after starvation, disease susceptibility is the most common cause of death among captive M. polyacanthus.

Hardness would benefit from being equally low, with GH values of 5-8° DH frequently suggested.

As this fish only inhabits slow moving or static water, aquarium flow should be similarly mild. I always favour external canisters and with ample flow restriction and diffusion over a wide area — say a spray bar — an optimal flow can be achieved. My preference for an external rests in part on the maintenance issue. Leaf fish are nervous and prone to acute stress, so as little hands-on interaction inside the tank as possible is wise. 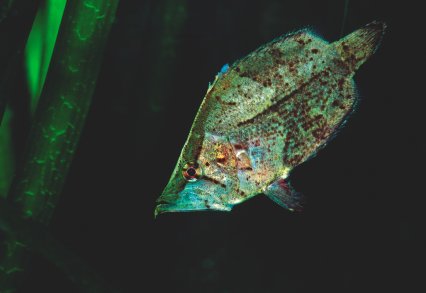 In contradiction to slow flow, excellent water conditions are vital. Ammonia, nitrite and nitrate are not tolerated and water changes must be performed at the first instance.

Similarly, the fish appears to react badly to medications and these should probably be considered only as a last resort.

Lighting levels are best broken up with ample floating plants, but this is not a nocturnal fish and will be out and about in your tank during daylight. Dark substrates are wise but not essential, but leaf litter bases seem to be accepted most readily. Planting is a must and any type, be it broad-leafed, bushy or grassy, will be much appreciated.

Kept correctly,  you can expect a good 8-9 years from a leaf fish, but be vigilant during that time.

Any signs of ill health need to be addressed early and for a fish that’s difficult to see, observation can prove quite time consuming. M. polyacanthus will attain a maximum length of 8cm/3.1” over this time, but will reach its full adult size much sooner.

Breeding Monocirrhus is not suggested for those who want high success rates. As a fish with strict demands, it tends to appeal to a smaller audience and shifting on fry may prove the most difficult aspect of reproduction.

Sexing leaf fish is usually possible when the fish engage in spawning, but can be awkward beforehand. The fish are sexable and sexually mature at just 4cm/1.6” long and when an ovipositor can be viewed in active females. It can be hard to ascertain just which is a pair from a collection.

Spawning can be induced with either a rise in temperature, increase in acidity, or both. Successful nurturing of water conditions will see the fish take turns to clean a surface – most commonly a leaf – before breeding starts.

Anywhere up to 300 eggs will be laid in one sitting and the male tends to care, although not without harassment from the female, and it would be prudent to remove her at this stage. At intervals from 60 hours on the fry will start to free swim and the male will pay little or no attention to them at this stage, his parental attention waning.

The fry are ravenous and cannibalistic, consuming tiny organisms and each other with equal aplomb. A good supply of all things small and wriggling should be provided at this stage, although some hobbyists report success feeding their juveniles with powdered and dried foods.