Parrot cichlids — to be cherished or avoided? Few tropical fish stir up as much emotion as the Parrot cichlid, says Jeremy Gay. But should they be avoided?

I remember the first time I saw a Parrot cichlid. It was in an advertisement in PFK in 1993, in which some apricot-coloured cichlids were displayed in a rather fine looking Juwel Lido aquarium.

I didn’t know what they were back then. They were new, weren’t in any fishkeeping books and the Internet wasn’t around yet.

Soon afterwards I saw these chunky looking, but cute cichlids, cruising up and down a furnished 120cm/48" aquarium and carrying a price tag of more than £200 for the pair.

First impressions? I liked them. I’ve always liked stocky, deep-bodied fish and this was the start of a love affair with cichlids that would continue to this day. I was a teenager at the time and although I would not be able to afford them back then, I could still daydream about the sort of set-up that I would keep them in.

At the time tropical aquariums were still very much about having the token display fish in your set-up — typically a pair of angels, Discus or gouramis — and these new fish fitted nicely into that display category, drawing your eye to them among the plants and shoals of smaller fish.

Years later I had a bit more money and the price of Parrots had come down to about £40 each. I bought one and kept it as pride of place in my hexagonal aquarium, complete with black gravel — another sign of the times!

My friends liked him, my family liked him and I loved him. I was convinced that this was easily the most intelligent fish that I had ever kept (Oscars included.) He was hardy too, surviving all my various errors and wipeouts, even outsurviving a Common plec. 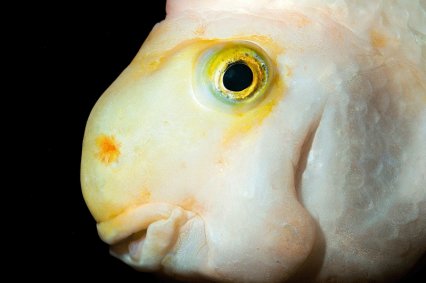 I woke up one morning, however, to find my beloved Parrot with a piece of the black gravel stuck in its mouth. It could still breathe, but definitely couldn’t dislodge the gravel on its own.

Going on what I had learned from my dad years previously, when the same happened to a family goldfish, I caught the fish, held it in the net and levered the gravel from its mouth with a matchstick.

Luckily it was fine, but I had found out that this was a hybrid fish, with its own set of problems, including a deformed mouth.

I got older, discovered girls, rehomed the Parrot at my local pet shop and shut down and sold the hexagonal tank. I didn’t keep Parrots again until I later worked in an aquatic shop.

By then I had become better educated about fishkeeping in general. The parrots were still stocked, these days selling at the cheaper price of £15 to £25 each.

The shop ordered some Parrot cichlids from Singapore, but instead of getting the usual apricot- coloured fish, we received something listed as "Purple Parrot, ART." What had arrived? About a dozen, deeply coloured purple-  dyed Parrots!

The ART stood for artificially coloured, and through our complete naivety we had ordered dyed Parrot cichlids.

We took them off sale immediately, but a clued-up customer spotted them and wrote in, saying how disappointed he was that he had seen them in store. 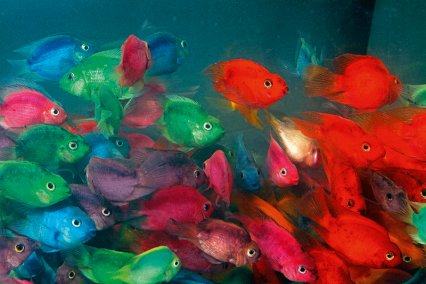 I wrote back saying that I was equally disappointed to have received them, but did not believe that euthanasia would be right and instead offered them tlc and time, hoping the dye would eventually fade —which it did. I have been particularly twitchy about Parrots ever since.

In 2007 PFK visited the Aquarama aquatics show in Singapore. I’m sure most people are already aware, but Singapore is the largest exporter of tropical fish in the world, and most of the easily bred, community fish we keep have usually come from farms there.

Parrot cichlids are massive business out there. Together with another cichlid hybrid, the newer Flowerhorn cichlid, and the Asian arowana or dragonfish, which may also be a hybrid of several wild species, they make up the big three exports and were a major feature at the farms, the show and in their aquatic shops.

You can see a video showing Arowana, Flowerhorns and Parrot cichlids at the show below:

We didn’t know what Parrot cichlids were at first, but many guessed that they were a cross between the Midas cichlid (Amphilophus citrinellus) and the Golden severum (Heros efasciatus). More recently the Singaporean suppliers started to list them as such, Heros severus x Amphilophus citrinellus, so it appeared that the guesses were correct. The true H.severus by the way is a mouthbrooder, and the Singaporean severus are all almost certainly efasciatus.

The trouble is that the Singaporean fish breeding industry is very much about selling the next big thing, frequently at the expense of the fish themselves. Singapore brought you the Balloon molly, and the Parrot cichlid itself has a very much shorter, and some would say deformed body, than both the Midas cichlid and the severum.

A shorter-bodied fish means more people can house them in smaller tanks, which in turn means more sales. 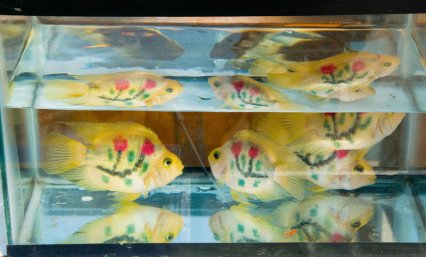 The apricot-coloured Parrot quickly became the red Parrot, blood red Parrot and then the purple Parrot. There were even tattooed Parrots with messages and pictures scarred onto them. Even worse is the physical abuse and cruelty involved in cutting the tails off some live fish to  create "heart Parrots."

Placed into everything from African cichlid tanks to arowana set-ups these are the clearly most abused of all tropical fish and treated with similar disrespect, by many, to goldfish.

One noticeable factor with Parrot cichlids these days is how large they can grow. Midas cichlids easily top 30cm/12", and Severums 20cm/8"+, and I’ve witnessed many rehomed Parrot cichlids, topping 20cm/8" in length.

Going by this, and working to our six times tank length recommendations, they will need an aquarium of at least 120cm/48” in length, long term, and powerful filtration combined with regular water changes to deal with all of their waste.

In terms of water parameters we must look at the parent’s requirements. The Midas cichlid is native to hard water and Central American lakes, so requires pH in the high 7-8. Temperature can range from low 20s°C to low 30s (72-90°C). Wild Severums are South American so we typically associate them with higher tropical temperatures and softer water, pH 5-7 and 24-30°C/75-86°F.

From this, and adding the factor that the Parrot cichlid is very much removed from wild fish, we can assume that a pH of 7-8 and a temperature of 24-28°C/75-82°F will be fine. 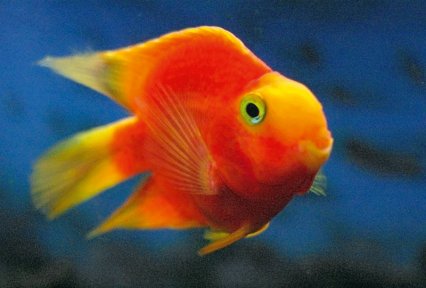 Parrots are easy to feed and will accept dry frozen and live foods. As they get larger a main diet of cichlid sticks or pellets will be fine.

As for tank mates, if Parrots grow up with them from small they are generally OK with such as rasboras, tetras and barbs, though add a shoal of small Neons to a tank of large Parrots and they will be eaten.

Depending on where you shop, these are sometimes kept and sold alongside Malawi cichlids.

They tend to do OK even in these chaotic set-ups as the mbuna just think they are a large Red zebra — though I don’t advise that you take this route, as if the dominant mbuna does take offence, the Parrot — with its deformed mouth — does not have the dentition to fight back.

One thing that often happens with Parrot cichlids is that they spawn. They are substrate spawners, like their ancestors, cleaning a rock or piece of wood on which to lay hundreds of adhesive eggs.

If the fry hatched they would protect them too, only they never do, and despite being one of the most likely cichlids to actually spawn, I have never seen or heard of the eggs hatching, instead going white due to being infertile.

And here’s a word of warning…Parrot cichlids will try to breed with almost any other substrate- spawning cichlid.

Midas and Severums would make sense, though I have seen them spawn with any number of other Central American cichlids, from Jaguars to Convicts, luckily with the eggs never hatching.

What may start off as an interesting chance spawning may become tiresome as your singular Parrot lays batch after batch of eggs that prove infertile. 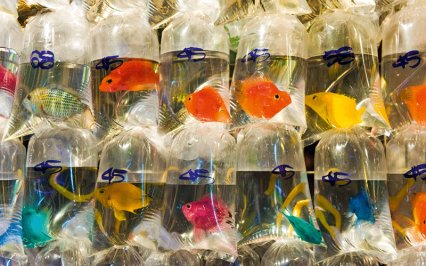 We actively campaign against the sale of dyed fish, as we know through our own research that the dye is injected into these fish or tattooed onto them. We therefore in no way condone the sale of dyed Parrot cichlids and don’t recommend that you keep them either. Heart Parrots are treated even worse, though we have not seen them for sale in the UK.

Hybrids cause us problems too (see below) when it comes to identifying fish.

So although they are cute, clever and generally good fish for the community, we would recommend that you try some other fish instead.

If you still want to buy Parrot cichlids avoid all but the apricot coloured ones, or rarely, the olive coloured ones, as these are not dyed for appearance. However, I can’t help but feel that the purchase of any Parrot cichlid is fueling the demand for more, including those that have been dyed, tattooed or tail-docked.

Why are hybrid fish such a problem?

Hybrids are found everywhere in the animal world and are especially common in the terrestrial plant world.

It could be argued that domestic Discus are probably hybrids of the three wild species, as are some forms of platy (crossed with swordtails) and lots of Malawi cichlids, like calico Aulonocara. If you knowingly buy hybrids and breed them, as long as the buyer knows what they are there may not be a problem.

Hybrids do, however, cause problems when you want to positively identify fish (like the very similar Vieja cichlids from Central America or Metriaclima cichlids from Lake Malawi) and when it becomes paramount to keep a species absolutely pure, as in conservation.

As any seasoned Malawi cichlid keeper will confirm, if left to hybridise the hybrid progeny becomes increasingly large, drab and similar, and if left for years a Malawi tank can change from a colourful, diverse mix of many different species to one, singular hybrid mass. Imagine that happening in the wild?

Hybrids may then, unknowingly, make their way back into the shops and have the fish buffs puzzling over them, misidentifying them and then unknowingly crossing them again. This creates a headache for the home collector and loss of the true species that we sought out and brought into the hobby in the first place.

Some argue that hybrids are sterile, as Parrot cichlids in particular seem only ever to produce infertile eggs. This doesn’t seem to be the case however with Discus if they are hybrids, livebearers, with most Central American species, or with most Malawi cichlids. So beware.

Hybrids are also known to have something called 'hybrid vigor' with a new injection of foreign blood making them larger, more aggressive potentially and more successful than either single parent species. This again could be catastrophic if hybrids are released into the wild. 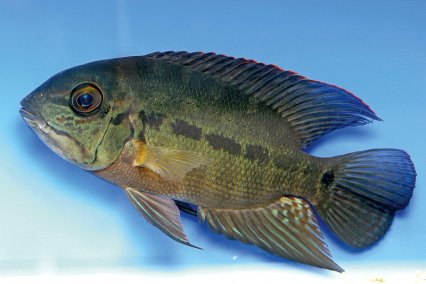 What of the true Parrot cichlid?

There is another Parrot cichlid — not a hybrid, but a true species — called Hoplarchus psittacus from South America (pictured above).

This large, softwater fish is peaceful and until recently very rare in the hobby. It is becoming increasingly more available, however, and being tank bred it can be kept with other, large, peaceful South American cichlids like Uaru, Severums and Satanoperca.