What’s your vote for the prettiest marine fish alive? Chris Sergeant suggests it might be a harlequin tuskfish. And he might be right, too.

When it comes to a celebration of colour in the natural world, it’s hard to look past a coral reef. These bustling metropolises of life, set over the backdrop of brightly-coloured coralline structures, are often bursting at the seams with bespoke marine life, each decked out in an array of hues and shades, seemingly attempting to outdo its neighbour in some battle of aesthetics.

In terms of front-runners, numerous invertebrates put on a good show, whether that’s the club-wielding peacock mantis, Odontodactylus scyllarus, resplendent in its green and reds, the flashing flesh of the disco clam, Ctenoides ales, the multitude of magnificently decorated nudibranchs, or the pulsating, psychedelic light show of a performing cuttlefish.

From a piscine perspective, there are plenty of big-hitters too. The mandarin dragonet, Synchiropus splendidus, dragon moray, Enchelycore pardalis, and candy basslet, Liopropoma carmabi, are notable stand-outs, while as a collective, great shoals of lyretail anthias, Pseudanthias squamipinnis, aggregating in the water column really take some beating.

If this beauty contest was taking part in Australian waters, then for me there would only be one winner: the flamboyant harlequin tuskfish, Choerodon fasciatus. The psychedelic colours and mobile nature make them hard to miss as they patrol their patch of reef, scouting out food and driving off intruders and rivals.

Hailing from the Labridae family, they are one of 28 species to fall under the genus Choerodon, following the addition of C. aurulentus, C. cypselurus and C. skaiopygmaeus after a taxonomic review in 2017. Yet they are the only species to feature in the aquarium trade with any sort of regularity.

From an etymological standpoint, Choerodon can be broken down into the Greek ‘choiros’, meaning pig, and ‘odous’ denoting teeth, a clear reference to their prominent tusk-like anterior canines. At a glance, their dentition is reminiscent to that of the Atlantic wolfish, Anarhichas lupus, another toothy (but much more UK local) predator and fellow purveyor of crustacean flesh. While such fearsome fangs might evoke worry on the part of an aquarist undertaking in-tank maintenance, they are only really a threat to the smaller reef residents, and so for the most part, they are of little consequence to even the most careless of fingers.

In terms of their common moniker, the harlequin is a reference to the comic servant character from early Italian theatre, characterised by his gaudy, checked attire. Whether intentionally or not, the comparisons do not simply end with appearances alone. The harlequin, referred to as Arlecchino in Italian, was famed for his physical agility, a trait well suited to almost all members of the Labridae family as they nimbly navigate the swell above the reef top. In theatrical terms, the harlequin’s primary role on stage was that of the trickster, incessantly attempting to thwart the will and plans of his master in the pursuit of his own interests. While for the Arlecchino, that was primarily in the name of love, but when it comes to the harlequin tuskfish, they are more content with the single life and so food is their greatest pleasure. Given that their particularly tastes involve many an aquarium critter, unfortunately this can often come at great expense to their aquarist.

As with the fictional character, it’s that dazzling outfit that instantly catches the eye, and it’s a dress sense that only improves with age. On the whole, adults sport seven or eight pairs of vivid, alternating vertical copper-coloured bands over a white body, but the final accoutrements are dictated by their location. 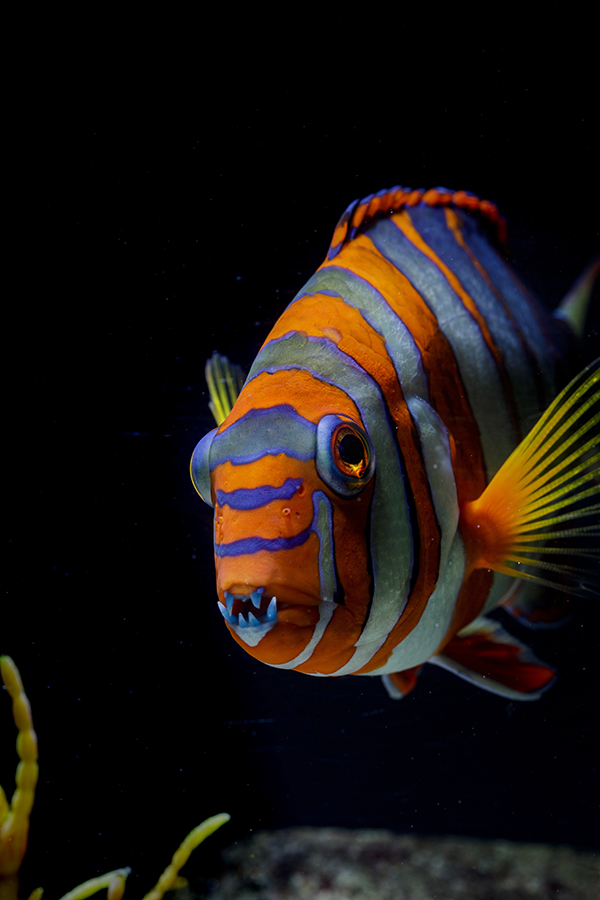 The teeth have it

Perhaps their most eye-catching adornment though is their teeth. As harlequin tuskfish grow, their pearly white gnashers turn powdery blue. The dentition isn’t just for show either. Prowling their seaward reef territories, they happily snack on a variety of motile invertebrates, making short work of even the most heavily armoured prey items.

Grasping crabs or shrimps between their tusks, they tear through to the fleshy interiors with ease and have no issues extracting snails from their shells either. The teeth also come in handy when gripping and flipping over small rocks in search of hidden food, so aquarists be warned, larger individuals can be handy aquascapers in their own right. There are even videos purportedly showing harlequins engaging in tool use, grasping a clam in their jaws and smashing it against a rock or coral head — nature’s own anvils — to break their way into the bivalve. Unfortunately, upon closer inspection, it seems a case of mistaken identity, with their close cousin and star of BBC’s Blue Planet II, the orange-spotted tuskfish, Choerodon anchorago, being the ingenious little fish in question.

They aren’t the only family member thought to engage in such behaviour though, as tool-use has also been documented in graphic tuskfish, C. graphicus, and black-spot tuskfish, C. schoenleinii, as well as fellow Labridae members, the yellowhead wrasse, Halichoeres garnoti, as well as the sixbar wrasse, Thalassoma hardwicke, too.

Read the rest of the feature in the July issue, available to read instantly on our digital edition HERE  or purchase the print edition HERE.