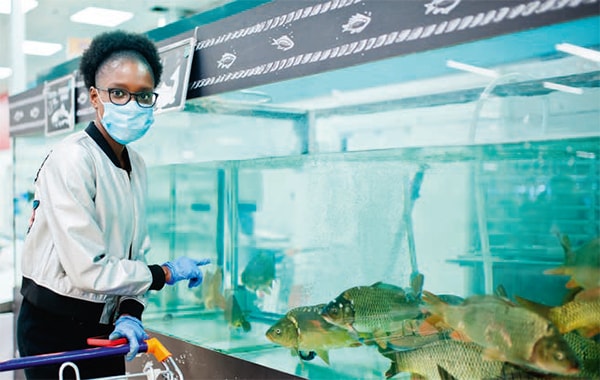 Who’d have thought people would turn nasty because they couldn’t buy a Platy? Turns out that as customers, we have some adapting to do to the new way of things. Nathan Hill shares his opinion.

Spat at, screamed out, called the ‘f’ word, called the ‘c’ word, threatened with violence, greeted with mock outrage, ‘cheers, kids are crying now...’ How some hobbyists have chosen to compose themselves during the gradual transition to re-opening stores has been despicable. Show some class, folks. I’ve been hearing some real horror stories of behaviour from guys out there in aquatic retail.

I’ve not stepped foot into a store in over two months now. My universe now extends as far as an hour’s walk or a 30 minute cycle from my home (got to keep that Coronastone in check) and the list of shops I’ve visited can be counted on one finger. My reasoning for this is twofold. For one, I’m asthmatic and don’t fancy exposing myself to the risks of infection. But more importantly, in my case I have been sat on all the provisions I need to keep my tanks ticking over smoothly. I was lucky enough to raid the PFK goody cupboard before being sent to work from home, and my fish can’t believe how good they’ve got it.

In a nutshell, any trip I could make out to my local fish shops right now wouldn’t be essential. It would be a pointless risk.

Given that I live in a shared house with three others, two of whom are out on deliveries all day, I’m also in that camp of being a potential vector myself. I could go enjoy some retail therapy, but I’d be risking the staff at my favourite stores if I did.

As we start to venture back out into a post-lockdown era, and once we have gotten past the inevitable teething troubles of cars with flat batteries and remembering how to drive on roads again, we can expect a very different landscape to the consumer aspect of our hobby.

Some stores have already used the resource that is social media to show customers how things will be in this ‘nervous new world’.

In almost every case I’ve seen, stores are enacting strict policies of how many customers can be on site at any one time. That might mean that you’ll be in a queue for a while, and when that queue clears, you’ll only be allowed in two at a time. Turning up with the whole family for an outing isn’t going to be an option for a while. Expecting to have hours comfortably browsing through tanks is a luxury you can expect to fly out of the window.

There are a lot more ‘poorly’ people in aquatic retail than you might think. A lot of folks don’t open aquatic stores because they happen to be athletes at the top of their game. In more than a few employees I know of, aquatic retail has been a final, welcome option when other careers have been excluded by health issues. The staff in your store might look good on the outside, but I know many of them who have had heart attacks, strokes, kidney issues and more that have forced them out of their former lives. They are vulnerable.

And that puts me in to a paradox. Our stores won’t survive much longer unless they start seeing some cashflow. They need your money, but they also need your common sense and your patience.

It’s not a big ask, but if you’re going out, wear the mask, obey the rules of the store, and more importantly than all — be kind.