If contemplating a first Malawi cichlid, or even an injection of colour into an existing mbuna aquarium, you can't go far wrong with a Yellow lab, says Jeremy Gay.

A cichlid of many names, the brightness of Labidochromis caeruleus says it all. Sporting a solid bright yellow, few fish, even marines, can outshine this fish. A candidate for best Malawi cichlid of the lot, it should be a definite for your first tank.

A Lake Malawi endemic, the Yellow lab is a regional colour variant of the blue-white L. caeruleus.

Populations in Kakusa, Mbowe Island and Lion’s Cove contain bright yellow fish which obviously appeal to fishkeepers — although 99.9% of all Yellow labs are now captive bred from wild ancestors and Singapore and the Czech Republic are the major exporters.

Czech fish are generally smaller, but better quality and worth their extra cost.

Yellow labs are one of the easiest mbuna to feed because they are insectivores, being less reliant on algae and less likely to develop Malawi bloat through being fed the wrong (high protein) diet in captivity.

They will be fine with Spirulina flake and even goldfish food, if keeping protein levels down for other species, though, unlike many other mbuna, they can be fed on a standard tropical fish all-rounder and lots of frozen foods like bloodworm, Mysis and brineshrimp.

Spirulina flakes and pellets are said to enhance colour too.

Yellow labs are among the most peaceful mbuna and rarely exceed 12cm/4.7” in length. That said, a 120cm/48” and over mixed mbuna aquarium is best as it means females can avoid males — and males can avoid more aggressive males of other species.

Create a large rock structure with plenty of caves and hidey-holes with a few rocks placed to break up the line of sight. Any rocks and substrates can be used, including calcareous ones, though Yellow labs turn pale over new coral sand and ocean rock and look deeper coloured when swimming over dark substrates and dark décor.

Water quality should always be top notch, with plenty of changes and hefty filtration provided by one or more large external canister filters. Trickle and fluidised sand filters are great for nitrification, and add an air stone for extra aeration.

Yet although this species is peaceful, never understock it. A community of less than 20 is likely to be more aggressive and if you just mix Yellow labs with, say Aulonocara, you may be surprised at how aggressive a male Yellow lab can become. Buy them small, grow them together and keep lots in any given space. 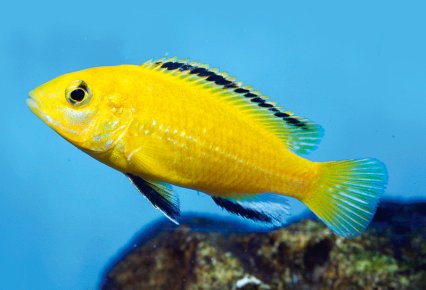 The best companions are other placid species of mbuna and even Malawi cichlids. From the mbuna choose Pseudotropheus acei, Gephyrochromis, Iodotropheus and other Labidochromis.

Yes, there’s a risk of hybridisation between Labidochromis, but quite frequently labs will breed with Metricalima and Pseudotroopheus too, so it is almost inevitable.

As for haps, Placidochromis work well, as do Copadichromis, though these shouldn’t be mixed with any aggressive mbuna and, strictly speaking, mbuna only is the best way to go.

Use the bright yellow of the labs to your advantage and mix them with bright blues, orange, black and white.

A mbuna tank should be a riot of colour and the more colour and movement you add, the more fabulous the spectacle will become.

Set up an area specific biotope

Want to add a twist to the standard Malawi biotope? Why not go area specific!

If you take the most famous of the naturally-occurring Yellow labs from Lion’s Cove in the north-west of the lake you could also add Metriaclima zebra ‘Gold’, Pseudotropheus sp. ‘Polit’ and Cynotilapia afra from the same area.

Decorate it with large boulders and fine sand and you will have a very accurate and very desirable Malawi cichlid biotope.

Can I sex them quite easily?

Colour is key as males are deeper, with yellow all over the body, including the belly. They may also have black on the belly, a black chin and lots of heavy black outlining on the fins.

Females are generally smaller with shorter fins. Their bellies are lighter, sometimes even white. Their fins will carry little or no black outlining and they shouldn’t ever have black chins.

If still in doubt, which is possible with young fish, observe behaviour patterns. The dominant fish will always be male and, if they have been in the tank for a few weeks, it’s not uncommon for females to be carrying (mouthbrooding) eggs.

A sure sign a female is carrying is a reluctance to eat, coupled with a distended throat. Mbuna will breed from just a few centimetres in length.

How do I breed them?

Breeding is as for any other mbuna. These fish are non-pair forming, maternal mouthbrooders and the male first clears and defend a territory, either over a rock or substrate.

He will then dance and shiver at passing females to entice them over while continuing to chase away rival males.

The female then swims across and the pair make circular forays as the female lays a singular large egg, whips round and takes it into her mouth.

The process is repeated some 20 times until she is carrying a mouthful of fertilised eggs. She will then be chased off and in about a month’s time release large, fully formed fry.

When she releases them have lots of nooks and crannies ready for the young to use as a refuge, otherwise tank mates will eat them on sight.

What is the best size at which to buy them?

Buy any Malawi mbuna at less than 5cm/2”. They are less aggressive then and create a smaller biological load on your filter. This means you can introduce quite a few in one go.

What sex ratio should I buy?

At least two females to every male. Yellow lab coloration is so nice that a group of two males and four females or more gives the best visual effect.

My Yellow labs have faint vertical bars. Are they hybrids?

Some non-yellow caeruleus have vertical bars so you might be OK, though barring in captive strains is synonymous with fish from Singapore, which are of lesser quality and more likely to be hybrids than those bred in Eastern Europe.

A solid, un-barred yellow coloration is best though.

Can I keep Yellow labs with non-cichlids?

Of all the Malawi mbuna, this is the species most frequently kept with rainbows and other larger tropical species. However, there will always be compromise as, although placid, placing Labidiochromis into a mixed community tank could release a menace. It’s definitely not recommended to do this.

What should the water parameters be?

Always keep nitrate levels as low as possible, preferably under 40 ppm, and ammonia and nitrite should always be zero. If your fish go off their food or start to flick on the substrate or gasp at the surface, check ammonia levels.