Loving the alien — keeping an octopus in the aquarium 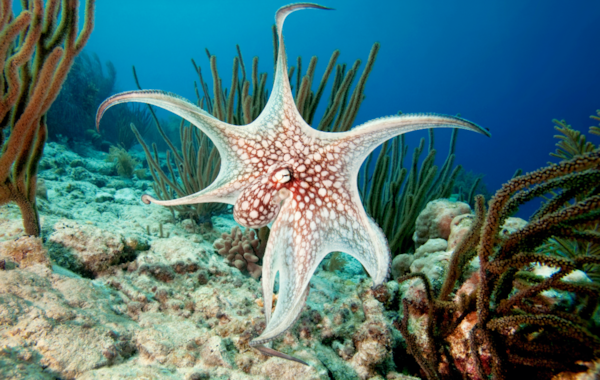 Movie aliens and monsters have nothing on the octopus when it comes to weirdness. And, so long as you can meet their needs, these animals make intelligent, interactive pets.

Frankly, you’d be hard pressed to make anything up as bizarre as an octopus. They lack a skeleton, but are extremely strong; they suck their liquidised prey through a hole in the middle of their brain; their eight arms are covered in independently-controlled suckers;
they have three hearts, blue blood and can change the colour and texture of their skin.

Octopuses are molluscs, belonging to a group known as the cephalopods (meaning ‘head foot’), making them relatives of squids and cuttlefish. They possess a muscular ‘cloak’ known as a mantle which covers the internal organs, and have a system of jet propulsion thanks to a structure known as the siphon. Rapidly forcing water through the siphon allows for rapid movement. As the shell has been reduced either entirely, or at least is now reduced to vestigial fragments in the mantle, they’re quite vulnerable, so octopuses have developed this ability to evade predators as a defence mechanism. It may be assisted with a puff of ink (which can act as a ‘smoke screen’, or perhaps act as a diversionary tactic to distract a pursuing predator).

To avoid being detected in the first place, these amazing animals adopt cryptic behaviours, and are able to change the colour of their skin via pigment-filled sacs called chromatophores, as well as its texture, thanks to structures known as papillae located across the body.

Octopuses are intelligent, with a natural curiosity to explore any part inside or outside of their aquarium; as a result, they’re interactive, and can assume full pet status. 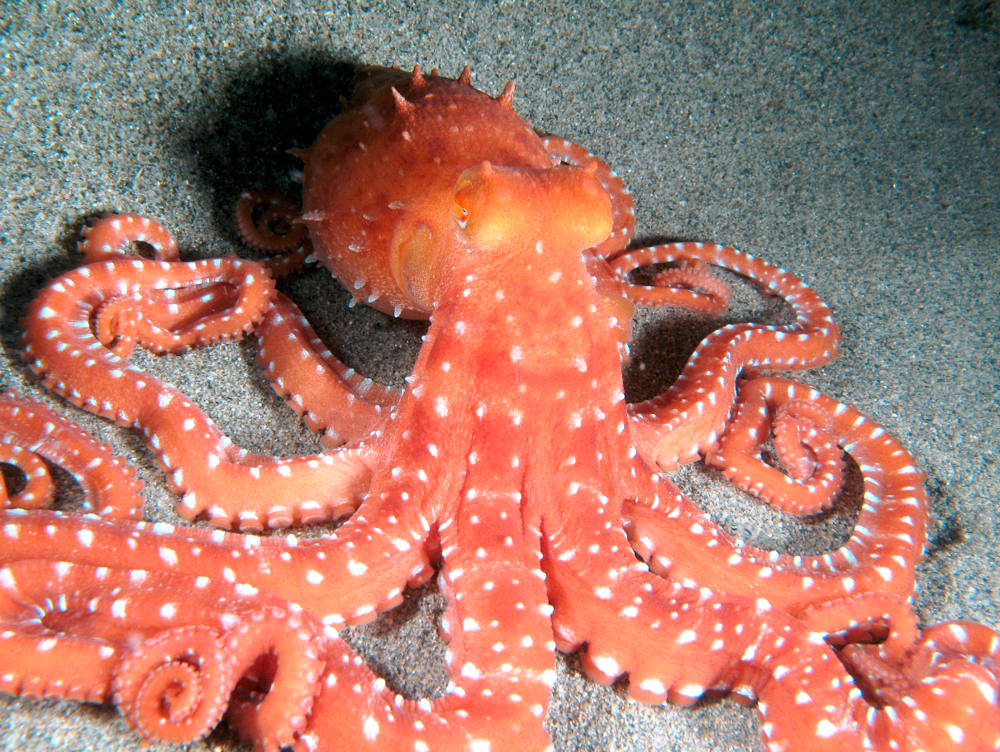 The White-spotted octopus, Callistoctopus macropus, is a nocturnal species.

Octopuses in the aquarium

It is possible to successfully maintain octopuses at home, but they require some key aspects of husbandry if they are to thrive.

Size: Octopuses can vary wildly in size, so it’s difficult to give recommendations as far as tank volumes go, but I’d suggest that the animal needs to have sufficient room to explore, and you’ll need to really judge each specimen on its own merits. If the length of the aquarium is around four times the arm span of the animal, this is a reasonable size.

Filtration and life support: Octopuses are messy feeders with a big appetite, so they generate a lot of solid waste. Therefore, mechanical filtration needs to be able to cope adequately, and the media should be cleaned or replaced frequently. An octopus system will have a relatively high bioload, thanks to the animal’s food, and the ammonia generated by the octopus itself, so efficient biological filtration is essential. Octopuses require optimal oxygen saturation, so ensure adequate turnover. This is important thanks to the relatively inefficient respiratory pigment haemocyanin. They’re not too fussy about nitrate, but aim for zero ammonia and nitrite.

A skimmer will help with ensuring oxygen saturation, as well as pulling out as much waste-laden skimmate as possible. Ozone isn’t tolerated well by cephalopods, so don’t use it.

Water: The quality of the salt water you provide is crucial for keeping octopuses, and they don’t do well in certain budget ‘fish-only’ brands of salt. Use RO water for make-up, and opt for a good, reef-quality salt to be on the safe side. Copper and other metals are a big problem for octopuses, so this is very important to observe. And employ chemical filtration courtesy of activated carbon at all times.

Aquascaping: Most of the octopus species available in the trade are from heterogeneous rocky environments, so replicating this habitat is essential if the animal is to feel secure, exhibit its natural behaviour, and display well. Provide lots of nooks and crannies for the octopus to explore.

Lighting: Your octoquarium should have sufficient lighting to see the animal, of course, but many species won’t tolerate excessively bright illumination. In fact, some octopuses are nocturnal, so you won’t see these until ‘lights out’ generally, although they can adapt to a certain extent. 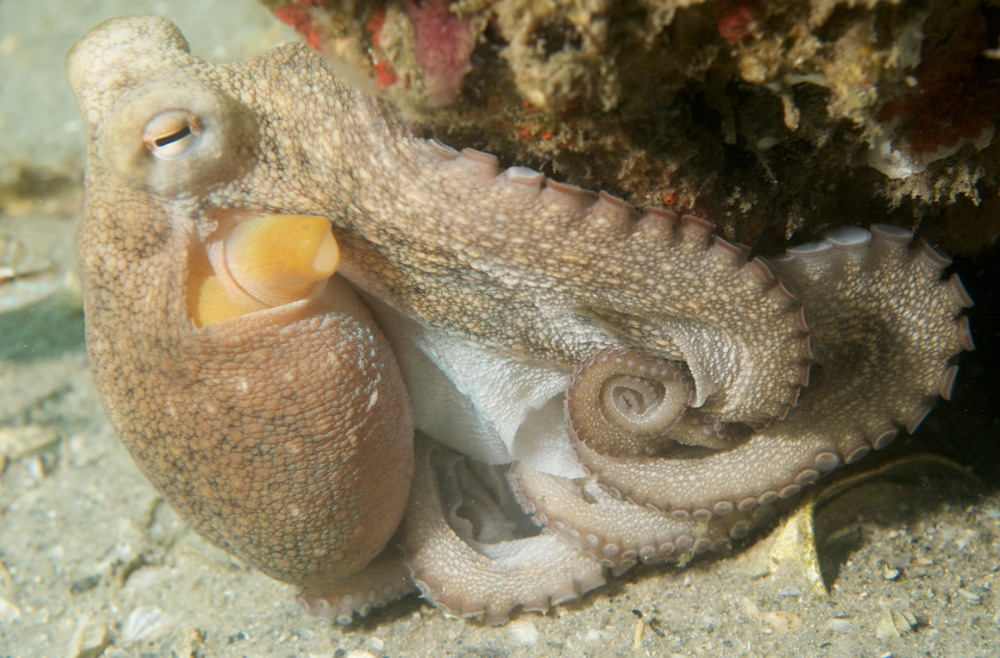 Octopus have no bones, so they can squeeze their bodies through the smallest of gaps.

Enrichment is very important for the long-term health and welfare of octopuses. There are various things which you can do to provide stimulation for the animal. Try randomising feed times, making your octopus work for its food, and simply interacting with it — you don’t have to overdo things, but get creative.

As escape artists, octopus would make Houdini blush. As they have no bones or shells to get in the way, they can squeeze their muscular, flexible bodies through the tiniest of holes — it’s as if they can turn themselves into liquid and pour through the gap. And given a chance, they will. Exploration is irresistible to them. Leave them in an open-topped tank, and you’re as good as asking them to leave.

Therefore, a tight-fitting lid is an absolute must. This could be made of glass, or it may incorporate mesh (obviously of the plastic, non-toxic variety), but crucially it must have small enough gaps to prevent escape. This obviously varies according to species or size of individual, but in some cases even a few mm is enough for them to get through. Bear in mind, too, that they’re strong, so any lid needs to be firmly fixed into place to prevent it from being pushed up.

Some public aquariums use wide bands of Astroturf to line the top of their octopus holding tanks to prevent escape — the octopus can’t grip the material properly. However, it’s not really a practical solution for the home system.

Octopuses are extremely curious animals, and it’s vital to ensure that any equipment which could harm them, such as heaters and filter or pump inlets, are well out of reach. Some ingenuity might be necessary to octo-proof any overflows and weirs.

Octopuses are voracious predators, with feeding facilitated by a parrot-like beak and a rasp-like radula, used to macerate their prey; they also possess venom glands used to immobilise the victim. They need to be fed regularly (daily or every other day); provide thawed crustaceans (crabs or prawns) or appropriately-sized fish. Octopuses adapt well to accepting frozen food, and this is preferable. However, they may need to have it presented to them on a feeding stick to get them used to it.

Octopuses generally don’t do well with conspecifics, thanks to cannibalistic and aggressive tendencies, and only a few species can be kept in groups. All the commonly-available species in the hobby should be kept singly. As for housing them with fish — it’s a no-no. Larger species may try and eat the octopus, while the octopus will make short work of smaller species. Many corals and anemones will sting the cephalopod’s sensitive skin, and the octopus will predate upon mobile inverts and clean-up crew. On balance, a dedicated species system is the way to go. 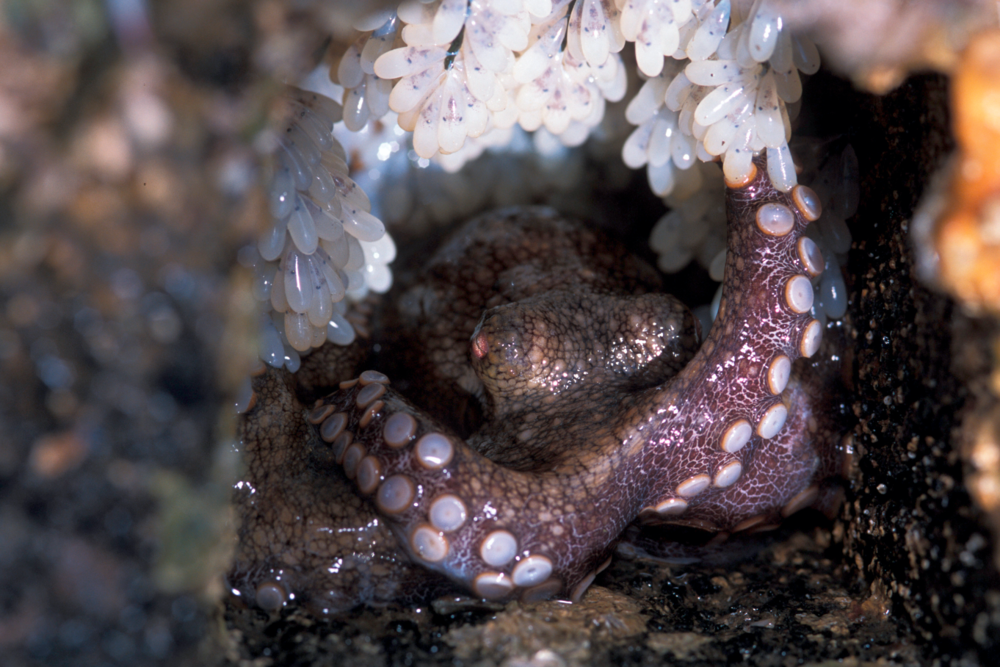 Female octopus will slowly fade away while tending eggs.

Octopuses don’t tend to have long lifespans, which can be an issue. Some small tropical species may live for no longer than six months after hatching, and individuals may be several months old when they make their way into the trade. For a medium-sized species such as the Common octopus, Octopus vulgaris, two years is good going, and with the Giant pacific octopus, Enteroctopus dofleini, which lives in very cold water, you’re looking at just five
years — tops.

A male octopus may suddenly die without apparent warning, but a female will naturally undergo a process known as senescence. She lays eggs (which may be either fertile or infertile depending on whether she has mated), and then spends the rest of her short life tending to them. She’ll refuse food and slowly lose condition, possibly over several weeks.

Senescence can be a distressing phenomenon to watch, but it’s a fact of octopus life — you have been warned.

We don’t know an awful lot about octopus disease. Occasionally, parasites may be a problem, as can bacterial infections of the skin — but these should be left to a specialist vet to diagnose and treat if necessary.

Most health issues are primarily due to environmental factors: for example, ammonia spikes or metal pollution; or through boredom. Therefore, maintaining ideal water quality and a stimulating environment should reduce any potential health problems.

Avoid the blue-ring octopus species at all costs.

There is a genus of octopuses you’ll want to avoid. Get bitten by one of these, and you’re in for a world of hurt — and they’ve been responsible for deaths. I’m referring to the blue-ringed octopuses (genus Hapalochlaena), of which there are several species.

Blue rings tend to be small (with a span of only 10cm/4in maximum) and beautifully coloured, but they harbour bacteria in their salivary glands which synthesise tetrodotoxin (TTX). TTX is one of the most potent neurotoxins known, and according to survivors, the consequences of a bite sound terrifying, including paralysis.

Amazingly, these animals are imported; they’re not actually illegal to keep under DWA (Dangerous Wild Animals) licensing, but no responsible retailer will sell you one. I know of one dealer who was more than a little concerned when several blue rings were added into a shipment by the collector as a sort of ‘freebie’. Luckily, the dealer donated the animals to public aquariums able to house them.

4 octopus for the aquarium

Octopus offered for sale will often simply be labelled ‘Octopus sp.’ due to the challenges of conclusively identifying them. However, a few crop up frequently which can fairly easily be given an ID. For others, you’ll need a good book such as Mark Norman’s Cephalopods: a World Guide. 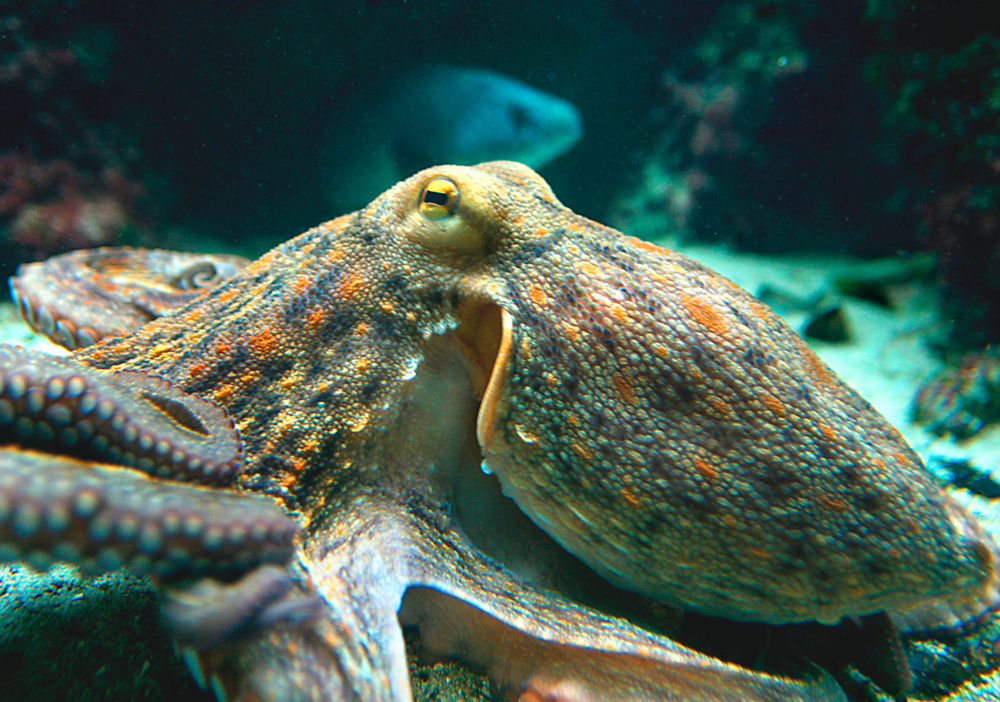 ‘Common octopus’
Scientific name: Octopus vulgaris (Oct-oh-puss vul-ga-riss).
Origin: Worldwide, across temperate and tropical seas.
Size: At least 60cm/24in span, and perhaps up to 1m/40in.
The Common octopus is frequently offered for sale in the hobby. The situation is a little confusing, as several species from a ‘complex’ are actually sold under these scientific and common names. 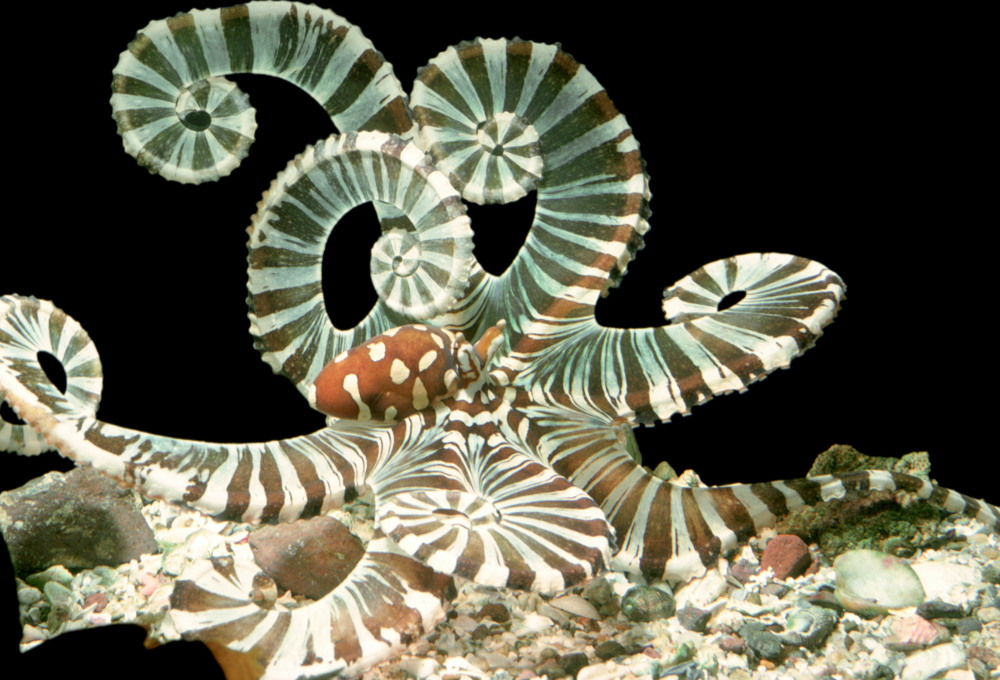 Zebra octopus
Scientific name: Octopus horridus (Oct-oh-puss ho-rid-uss).
Origin: Indo-Pacific.
Size: 30cm/12in.
The Octopus horridus complex comprises several Indo-Pacific species, and you’ll often encounter these. They tend to have long arms and adopt an extremely cryptic way of life. However, the escape abilities of these octopuses are second to none. 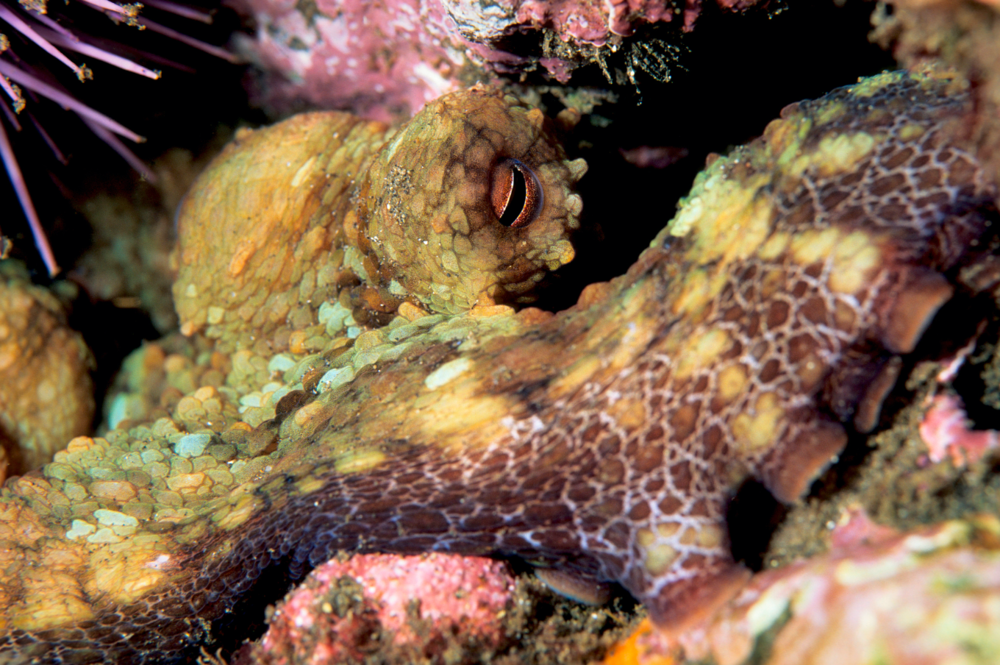 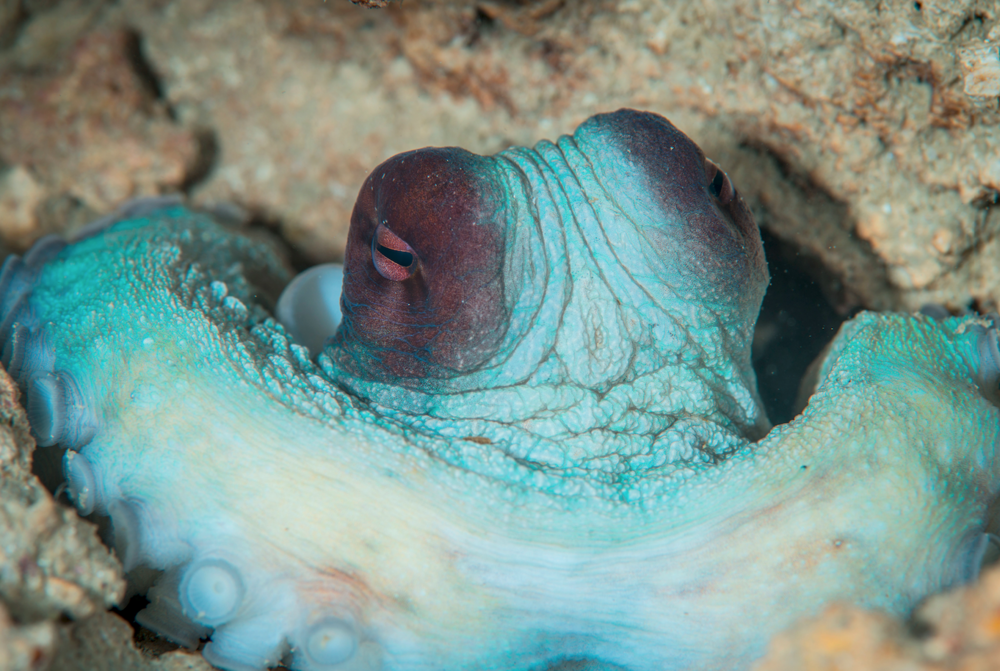